Funny thing you renting this here Pawn Shop Chronicles from Redbox and all. One, I always wondered what happened to the director of The Cooler, and two, it sure does warm the heart to know that Brendan Fraser is still alive.

One might say this was the right movie for the right time, for any number of reasons. The two you mentioned, sure, but it also struck me  American cinema sure has underserved the white trash community of late. Like, youd think all we cared about anymore was Downton Abbey and shit like that. We were in danger of becoming classy. Too classy, if you get my meaning. Highbrow was in, language was getting cleaned up, and rumor has it, people were starting to read again. Maybe this film can set things right. Were dumb as shit, God bless us all, and its time to party.

So a movie centered around a pawn shop?

Why not a pawn shop? But its not your ordinary pawn shop. General Lees Pawn Shop. See, its not just where a man named Alton (Vincent DOnofrio) can bicker with his black assistant about his aversion to black porn because the big dicks glisten too much, but its where all kinds of folks sell off their dreams, all for a quick hit of meth. Its the last stop on the road to desperation; a menagerie of the lost, the damned, and the three months behind in your rent. Only were not here to explore the new and mightily improved business of making money off the poor. No, sir. Were here to take a ring, a shotgun, and a gold medallion and spin each off into a sordid tale of murder, rape, redemption, and Elvis. And if a midget shows up at the end with a baseball bat, were not going to say a word. 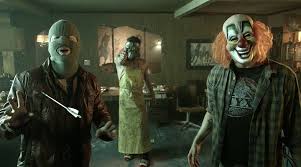 So its like David Lynch meets Quentin Tarantino, with a bit of Dukes of Hazzard thrown in?

If you need to label it, sure. Take the first story  The Shotgun: The Road to White Gold. We have Raw Dog (Paul Walker), Vernon (Lukas Haas), and a meth robbery gone bad, as if any has ever gone right. Theres a battered pickup with a bumper sticker that says, At least Jesus didnt write Battlefield Earth. Its not only funny, but unassailable logic to boot. See, Vernon needed gas money to get to the robbery, so he sold his shotgun for $20 at the pawn shop, and now they dont have any way to steal the meth. So the third member of the gang hits Vernon with the truck and the two set out on their own. Thankfully, they run into a hunter taking a shit by a tree, so they steal his crossbow. On the way to Stanleys house (Stanley being the meth dealer), they debate racism. Why are we white supremacists, anyway? Dont we have black friends? And how can we hate Jews if we love Jerry Springer and Adam Sandler? Long story short, theyre in it for the meatballs, which the meetings have every Saturday. Faulkner never plumbed the Southern mind with such richness.

So do our heroes get the meth?

They do not, as Vernon survives being run over, and is granted a silver shotgun by the devil, who happens to drive by in a shiny new truck. Naturally, Satan also has a burly mustache, perhaps so as not to frighten the people whose souls hes about to steal. The robbery commences, but Vernon interrupts the proceedings with blasts to assorted chests and torsos. He also shoots the meth lab, so the trailer explodes in a fireball. No one survives.

Now thats how you start a movie! Is this where Matt Dillon comes in?

Yep, hes the center of the second tale, The Ring: Caged Love. Its about being lost, then found, and going that extra mile to save the person you love. Oh, and women in cages. You see, Dillon is Richard, and hes on his honeymoon with his new wife. Only all his cash was stolen, and theyre on their way to Orlando. So he wants to pawn the wedding ring, valued at $17,000. But right before the sale is finalized, he notices another ring in the case, which just happens to be the ring from his first marriage. Hes stunned. Seems his first wife disappeared one day six years ago, never to be heard from again. Whered you get that ring, he screams. After threats and such, Richard sells the latest wedding ring for Altons car and directions to the workplace of the man who sold him the original ring. Richard also sends his new wife back to Connecticut. Saving his other wife is none of her concern. 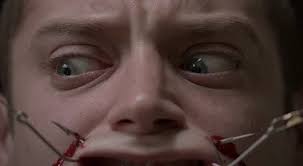 You saw that coming, huh? Yeah, after Richard tracks down the kid who sold the ring at Lous Fire Pit, he learns that he got the ring from his uncle, who won it in a poker game with some guy named Johnny Shaw, played by Elijah Wood. Not without reason, Shaw is a lunatic who kidnaps women, puts them in cages in silos, and jerks off to videos involving not sex, but the women being fed and patted down like stubborn cowlicks. Richard breaks in, sees his first wifes picture on the fridge, and puts a shotgun to Shaws head. After a brief Q&A, Shaw is decorated with an elaborate contraption of fishing hooks, line, and rope. Torture! Not getting any answers about his wife, Richard knocks out some teeth with a hammer. Right before a death blow, Shaw reveals the womans whereabouts. Out back, Shaw has stashed at least two dozen caged women, all naked and filthy, stacked into a huge pyramid. Naturally, Richards wife is the one chick we dont really want to see naked, as her tits are the most vile cone shape Ive ever seen. Just nasty shit.

So do they live happily ever after? I mean, technically speaking, Richard is a bigamist.

Richards wife, having been caged for six years and living in her own piss and shit, as he says, is a bit bonkers by this point, and she doesnt really want to leave. She claims to have a good life, even a few privileges. All the other women, now having been released, are not as reluctant, and they wander away from the farm single file, naked and glassy-eyed. But Richard cant worry about them. Once Richard tells his wife that hes gutted Shaw like a fish, she freaks the fuck out, stabs him repeatedly in the stomach, and crashes the car into a tree. Both die on impact, or very soon after. 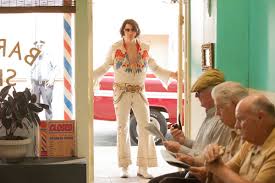 Naturally, the next story involves Elvis.

Brendan Fraser, out of work since that Pauly Shore caveman movie, is Ricky Baldoski, an Elvis tribute artist (do not call them impersonators) who works various county fairs trying to stave off both boredom and bankruptcy. His story begins as it must, with the desire to get a sideburn trim right before the big show. Seems the town is a bit nutty, though, and two barbershops sit side by side. Will it be Docs or Cooks? Armed with $200 after pawning his gold medallion (the story aint called, The Medallion: Split Ends at the Crossroads for nothing), he first selects Docs. But Doc angrily shaves off half a sideburn, so Ricky storms out, heading next door. Only Cook is outraged that Ricky would choose Doc first, so he slices his neck and tells him to get out. Outside, the townspeople are rioting for no apparent reason. It plays even worse than it sounds.

I assume that was enough? Even you have your limits.

I had hopes it would all come together, so I pressed on. My patience was soon rewarded, as Ricky stops by Crossroads Liquor, which is located at 666 Charon Street. Robert Johnson is playing guitar on the corner, and a shady preacher man lurks about, talking about souls and redemption. Is this the devil? Ricky sure thinks so, and calls his mama with the news. Cut to the county fair show, and Ricky is horrible. His impersonation of Elvis amounts to nothing more than karate kicks and old women standing on stage with firecrackers and flashlights. The preacher is in the audience. I accept your offer, Ricky yells his way, even though no offer was ever made. But at that instant, backup singers arrive and he belts out the greatest version of Amazing Grace ever heard in these here parts. To top it off, the naked women show up from the countryside, and are quickly draped with flags as they stand in front of the stage, like little ducks in a row. The crowd is electrified. The sky lights up, arms sway, and by shows end, Ricky has signed with Jerry Cleveland Enterprises, with Mr. Cleveland looking suspiciously like Colonel Tom Parker.

So the entire career of Elvis Presley was due to him selling his soul to the devil?

No chance thats a mistake? 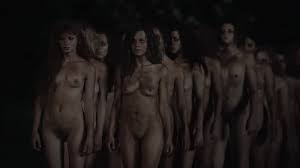 Okay, so if thats a happy ending of sorts, why does the movie choose to head back to the pawn shop one last time?

Alton has to confront his demons, does he not? So the big black truck thats been following him around townwe need resolution, no?

The mysterious driver of the truck turns out to be a midget. He buys a baseball bat, clubs Alton, but is soon chased out of the store by the guy who originally stole Matt Dillons wedding ring.

No, the other guy.

Why does he have the ring again?

The stories are all intertwined. What is old is new again. Back in time is also forward. You know, its why the exploding meth lab was seen in the background at the Elvis show. Or how the meth guy said he had a vision of an army of naked zombie women, and poof, there they were! Its an ode to Pulp Fiction.

Isnt it a bit late to be ripping off Pulp Fiction?

Not when the screenplay has been sitting in a drawer since 1997.