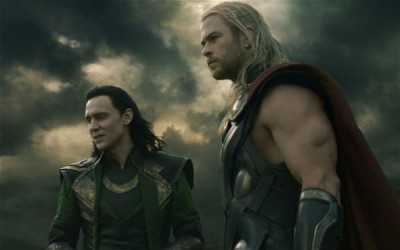 Skeezy Pickup Artist vs. Righteous Bro- the fundamental mythical conflict of Norse religion, and all mankind.

Fair Value of Thor: The Dark World: $6.75. As Frank Franzetta paintings go, this number is light on the cheesecake and heavy on the glitter. An amusing piece of fantasy sucrose. 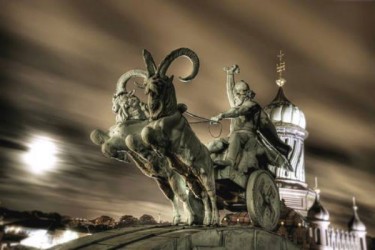 Why do they never use the flying goat chariot in Marvel comics? Disappointing.

But where is Tanngrisner and Tanngnjostr? Sadly, o fans of the Eddas, the immortal flying battle goats of Thor do not appear in this film.

The lives and concerns of intergalactic techno vikings never meant much to me. Thor was always one of the least relatable of all the superheroes, a walking anachronism that never really seemed to have an attachment to our world or our lives. Luckily enough, Game of Thrones director Alan Taylor  decides to skip the fish out of water narrative of the original for an adventure that takes place mainly in the gleaming utopia of Asgard, where they still drink out of goblets and have a feudal society, despite being immortals with teleportation technology.

The appealing aspect of Asatru (that’s the religion of Norse mythology) is that the Aesir carry on what they’re doing despite being foredoomed. Thor, in Norse mythology, knows that he’s going to die horribly in the venom of Jormungandr but he doesn’t let that slow down his enjoyment of the now or his efforts to do right by his family and friends. The Norse Gods were explicitly NOT immortal, and that gave a certain existential nobility to their conduct. This film eschews any hint of that grim determination, which is the stuff that made Die Nibelung such a powerful dramatic work. Instead you get a very glossy, very shiny portrait of a Max Parrish Asgard.

This time out, the bad guys are Space Elves. Yup, it’s the Valhalla Space Marines vs. the Dark Elder, excuse me, I mean the Asgardians versus the Svartalfar. Malekith (Christopher Eccleston) is the leader of a primordial race out to destroy the universe. For once, I’d like to see the leader of an ancient primordial race that thought the current universe was pretty spiffy. Anyways, he’s after the Aether, a bad vector graphic McGuffin that has the power to destroy the universe. Isn’t it fun how ‘Dark Matter’ has replaced ‘Antimatter’, which in turn replaced ‘Radioactive’ as the word for ‘can-do wonder substance’? Unfortunately this wonder phlogiston somehow ends up inside of love interest Jane Foster (Natalie Portman), because, as we all know, Greenwich UK is a great place to hide weapons of cosmic annihilation. 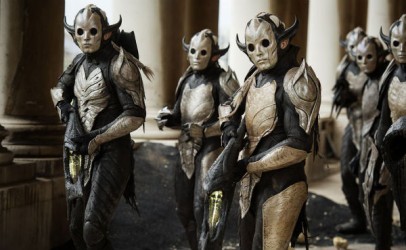 The bad guy kills Thor’s mom (Rene Russo), which causes her husband Odin (Anthony Hopkins) to order no retaliatory missions of vengeance. In order to escape being grounded by his dad once again, Thor must broker a deal with Loki (Tom Hiddleston), despite his record of treachery. This does hew roughly to Norse myth, where Loki was vaguely tolerated mostly because he was smarter than the enemies of Asgard.

Here’s where the next problem of this film comes in. It’s a lot more interesting and dramatic to watch Loki being a smart-assed cad than it is to watch a well-built Melbournian surfer carrying on like a stately log. Hiddleston’s performance has ambiguity, desire, and repression- his acting helps to make the character far more unpredictable, and thus interesting, than the linear hero of Thor, who doesn’t really have an crisis or catharsis. Sure, his mother dies (and her funeral is the best visuals of the film), but there’s no change, no maturation of the character. The entire universe is at threat of being converted into the dark matter Red Vines of doom, but nobody seems to care all that much. The characters are numb to the stakes, and that left me numb to the characters. Also, the film glosses over the technomagic. To complain about that is a nerdish peeve, but whether in fantasy or science fiction, it’s dramatically useful to give some over-arching framework. Harry Potter’s magic has rules and principles; the Force has rules and principals; Thor 2 just has horseback cavalry firing bazookas into space elves who chuck black hole grenades. There’s no schema to Thor’s world, and therefore very little sense.

The sub-plot revolves around Jane’s scientists friends trying to understand the cosmic convergence, a sub-plot that does give the film the most interesting gimmick- they figure out the wormholes, which then leads to a world-jumping climactic fight that takes place across the Nine Realms of Yggdrasil. Kat Dennings in particular steals the scene as Jane Foster’s snarky and tactless intern.

Thor 2: The Dark World reminds me of a really well painted set of miniatures: it’s interesting to look at, and it’s probably fun to some people, but it’s ultimately a well crafted lump of plastic.