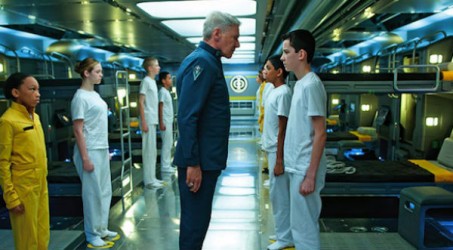 “I will gouge out your eyeballs and skull-fuck you!” “Sir I can’t help it sir!”

Fair Value of Ender’s Game: $11.50. It’s a cold sprinting synopsis of the book, but it still packs a solid cathartic impact in the resolution.

Why Didn’t You Boycott Orson Scott Card? I sharply disagree with Card’s misogyny, homophobia, and religious conservatism. I can say the same thing for H. P. Lovecraft. If I were to limit my readings only to the works of saints, I’d get bored quickly. And more importantly, I wouldn’t develop as a person. We cannot limit ourselves merely to the ‘agreeable’ or ‘correct’ culture- we must engage with the disagreeable or divergent if our own moralities are to bear any integrity. The mark of aesthetic maturity is the capacity to engage the art distinct from the habits of the artist.

How was the movie?

Passably good while demonstrating the dramatic characteristics that kept this project in development hell for decades. It’s hard to cast good child actors; aside from Ender (Asa Butterfield), the film weans away from spending much time with any of his friends or enemies. Instead, director Gavin Hood plays fast through a medley of the major characters and plot points. In the book, it’s important to establish how older brother Peter Wiggin is evil; here, he’s just a blonde bully. The space battles are short flourishes of CGI, overcrowded; we get swarms rather than fleets. The end project is faithful enough to satisfy the purist fanboys, but in the process of completeness eschews development of any of the themes or sub-plots that made the book appealing. If you weren’t primed for the film by reading the books, the film will leave you indifferent. 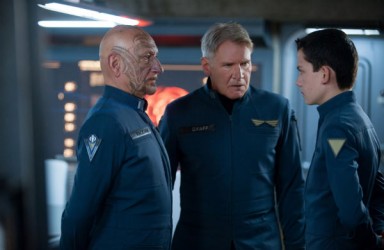 “Only steers and queers come from Planet Texas, Private Space Cowboy, and you don’t look much like a steer to me.”

Military School on Steroids: The basic concept: do a science fiction version of Full Metal Jacket, but highlight the trauma of the process by making the cadets actual children, as opposed to 17 year old boys. Ender’s Game can also be considered as an unofficial sequel to Robert Heinlein’s Starship Troopers. Where Verhoeven parodied the militarism by making a propaganda farce, Ender’s Game tackles the attitudes of the military by focusing on the officers rather than the grunts.

Rise of the Nerd Reich

Ender’s Game is a successful novel because it caters to that all too common fantasy of being the misunderstood prodigy hero. Ender’s Game appeals to certain breed of nerds as Atlas Shrugged appeals to nascent proto-yuppies. Just as many Best Buy manager types share the secret conviction that they are John Galt,  there is a strain of the socially stunted that believes himself to be Ender Wiggins. His is the position of the hypersaint, an innocent excoriated from evil by the holy light of logic. When he kills, it’s never cruelty, but always strategy. The dirty secret of Ender’s Game is that it’s one of the darkest fantasies of the disaffected- getting to kill all who oppose you, getting to play wargames with actual lives.

And that’s the appeal- the delusion of an infallible logic. When Ender is wrong, it’s always because he has been tricked- if he had the proper information, he’d never do the things that he did. Ender’s Game is appealing because it is an exaggerated extreme of the condition of most comparably bright children in America- eternally consoled for their torments by being told of their talents, seething in silent visualizations of brutal takedowns.

For persons of a certain mental age, that narrative is addictive. The problem with the Ender books is that we never get the world from outside of the bubble of Ender and Friends. They live in their mutually reinforcing technocratic admiration society. Their logic is never challenged, only their humanity. Ender Wiggins and his hyper-bright allies may make bad decisions from bad input numbers, but their formula, their calculations, are never wrong.

And that’s the new nerdish crypto-fascism. Replace ‘master race’ with ‘intellectual elite’ as a criterion, with ‘intellectual elite’ being determined from the basis of the pre-existing culture and priorities. Sociopathy becomes acceptable as long as you can show your work and demonstrate the utilitarian sufficiency of your atrocities. Ender’s Game is a classic of science fiction, while also being as dangerous as taking an unquestioning acceptance of Foundation or the ideals espoused in The Moon is a Harsh Mistress.

As for the film, it felt like a series of cut-scenes between the levels of a video game.