Jonny is no scientist…

My how the mighty tumble. What on earth is going on with Robert De Niro? I mean, I know he has been taking on crappy roles for years, but is this even the same man who played Travis Bickle? It can’t be. Suddenly I believe in alien abductions. Seriously, even in mindless drivel like Analyze This a burning ember of who he used to be peaks through. Not so long ago he was even making great films like Casino and Ronin. But here in Godsend, a bad movie by any interpretation, the “greatest actor of his generation” gets housed by Rebecca Romijn (who was actually pretty decent). The creepy little kid even out does Bobby D. It was just depressing.

Yes, so, I rented this movie even though I knew it was trash. Godsend is ostensibly about the moral dilemmas of the Hollywood science crush de jour, human cloning (I’m waiting for the first embryonic stem cell thriller). An interesting premise to be sure. Two loving parents are crushed when their eight-year-old son gets mowed down by a Camaro. A former professor of Jesse’s (Romijn) offers them the opportunity to clone their dead son. De Niro is Dr. Richard Wells, and he has perfected human cloning (in 1996, too, apparently). All by himself. So, after forty-seven seconds of soul searching, husband Paul (Greg Kinnear) agrees to clone the kid. Romijn, who is unable to conceive–I need to stop right here. Part of what chapped my hide in Godsend was the bad science that permeated the film. The fact that Jesse can’t conceive is one thing, but obviously she is able to carry a child to term. So, why not, instead of cloning the brat, don’t they just get into some artificial insemination? Because screenwriter Mike Bomback is a lazy prick, that’s why. Much more on Mr. Bomback in a minute. 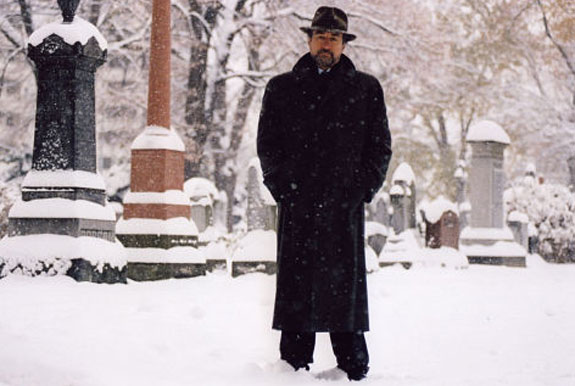 So, she has the clone. No one can know about what Dr. Wells, Jesse and Paul have done. To insure this, Dr. Wells moves them from their swank downtown Manhattan digs up to a fairly J.G. Ballard-ish township in upstate New York [Ed Note: Vermont, actually–more white people]. He gives them a big old house and gets Paul a job teaching biology at the local high school. Briefly I should mention the massive racism found in Godsend. Paul is nearly mugged early on by one of his former students. I’ll give you one guess as to what continent the would-be mugger’s ancestors hail from. Jesse goes on about how New York is not a safe place to raise a child. Specifically a white one. At one point, Paul is telling Dr. Wells how all the kids in the new town are so bright. They’re all white. It was just bad tasting. Back to the
plot. The kid, Adam (Cameron Bright) was killed on his eighth birthday. The clone-Adam is totally normal until his eighth birthday. Then he starts acting all weird. I mean, they might as well have just called the movie Spooky Kid. This is also the point of the film where Godsend sails off the rails.

Adam is having these stock Hollywood thriller/horror nightmares. As the viewer, we see bits and pieces, but of course the whole of what is going on takes the entire movie to (s l o w l y) unravel. We see a kid covered by plastic, the heirs to the creepy twins in The Shining and friends standing in a hallway pointing and laughing, a fire, the arm of a corpse, a woman getting beaten on by a hammer–shit like that. None of it makes the least bit of sense and is only scary because of the haunted house music and the fast jump cuts. The movie flirted with the idea that perhaps, maybe clone-Adam was remembering his former life. That line of thinking, in and of itself, is interesting. However, being a shitty movie (from the mind of a HACK), any possibility of good stuff got nipped in the bud in favor of your standard dark-thriller faire. 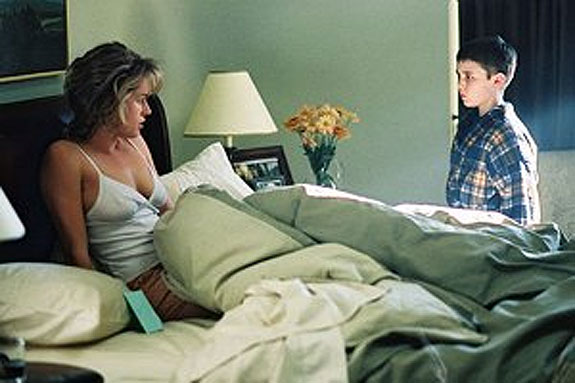 It turns out, that Dr. Wells pulled a fast one (surprise!). Right until the big climax (yawn) Paul had been repeatedly screaming at Dr. Wells, “There’s something you’re not telling us, isn’t there?” Worst foreshadowing ever. Dr. Wells had in fact lost his own son. His own son who burned down a school (the school that clone-Adam sees in his sleep terrors), bludgeoned his mother to death with a hammer (ditto) and burned down the family home, killing himself. Somehow Dr. Wells was able to mix the DNA of his own son up with the cells of Adam and create a hybrid that did the following:

As you can see, Godsend is basically a science fair for the brain dead. The DNA cocktail plot-device is just so stupid. It’s like in other shitty movies where hackers can break into government mainframes in twelve seconds. Fuck off. Also, apparently, Dr. Wells never cloned anyone else over the eight year time span of the film. I was half-hoping for an entire town of cloned spooky kids, but alas, the writer sucked. In the end we are left with one of the worst tellings of the Frankenstein story to date. We have a Dr. Frankenstein who is motivated by personal loss, not the untapped wonders of science, and a monster whose ass you kick sitting down. The ending of the film is stupid, lazy and perplexing to a point that it hads few peers in terms of sheer, “what the fuck?” I guess giving De Niro his $20,000,000 forced director Nick Hamm to discard the last five pages of the silly script and just end the fucker. Not a moment too soon, really.