Paul W.S. Anderson and a cast of nobodies.
Actually, Spud from Trainspotting is in it.

Jonny’s in a good mood…

I really wasn’t prepared for Alien Vs. Predator. Sure, I had done my homework and knew that it was supposed to be a serious stinker of a turd, completely and totally dishonoring the films AVP is based upon. Not living up to the high-standards of Predator, Alien and Aliens is one thing, but if a movie can dishonor Predator II, Alien III and Alien IV, you just know something is fatally flawed with it. Still, I was simply unprepared for how laugh-out-loud funny Alien Vs Predator is. Honestly, one of the best comedies of the year. I’m sure several people wanted to kick our asses, but Erich and I simply laughed those same asses off for over half the film. Funny? Laughter? Yeah, loads of it. I can assure you that not one of the dozens of chuckles that escaped our lips was intentional, but like Ed Wood, this film maker (Paul W. S. Anderson) has no fucking clue what on earth he is doing.

You can read all about what’s wrong with the plot of the movie on countless other websites, and rest assured it is retarded. I’ll try to encapsulate it for you quickly, cause I like to. Way back when Antarctica was Atlantis, Predators taught humans how to build pyramids. Then the ice age came. In the present day, multi-gazillionaire Charles Bishop Weyland (played by the always fun Lance Henriksen) uses super-duper-uber-satellite imaging to discover a really big pyramid buried two miles below the ice. He quickly assembles a crack team of experts in various fields, all of whom are between the ages of twenty-seven and twenty-eight to go check the pyramid out. Oops! Turns out that the Predators use the buried pyramid for some sort of mettle-testing, rite of passage hunting ritual. They keep a big-bitch egg-laying Alienette down there, and every 100 years they return to “hunt.” Uh, lots of killing takes place and only the best-looking human survives. Fin. 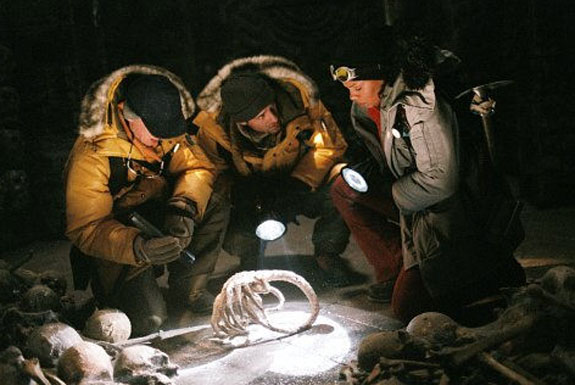 So here’s what was so funny, in no particular order; 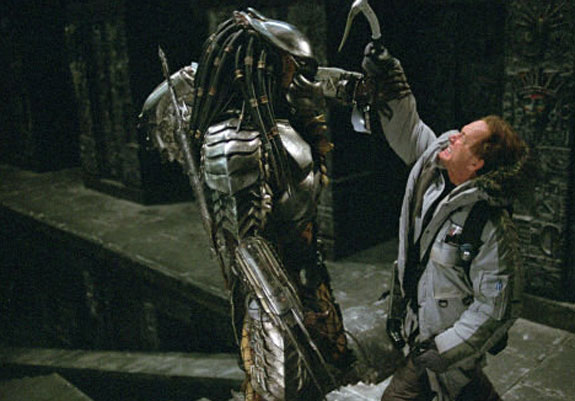 Again, while being a total stinker and a real letdown (I had heard Anderson on Howard Stern a few months ago guaranteeing Howard that AVP would not suck in anyway–why I chose to believe him I will never know) Alien Vs. Predator was way more fun than I thought it would be. None of what I found fun had anything to do with what the director intended, but so what? If you give me shit, I’m going to make shit-lemonade out of it. Anyhow, if you are really bored and want to see a decent–yet brain-dead–film, you could do a lot worse than Alien Vs. Predator. I mean, Stephen Sommers could have directed it. Just remember AVP is a comedy.