Home / Reviews / Movies / THE GOD WHO WASN’T THERE

THE GOD WHO WASN’T THERE 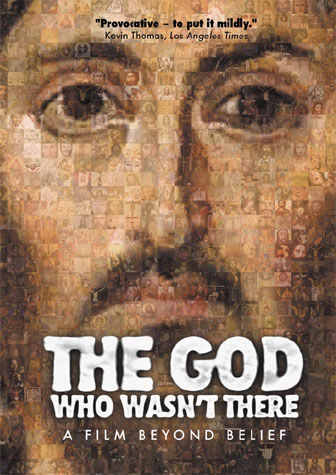 Written and Directed by Brian Flemming

Writer/Director/Narrator Brian Flemming gets an A+ for Effort, but only a B- for Execution. His new film, The God Who Wasn’t There, asserts that Jesus Christ of Nazareth never even walked the earth, let alone was the son of Imaginary Sky-God #1. And, for those who think Jesus was a really “cool dude” who loved everyone and his message has been stolen and co-opted by reactionary meanies, think again. As Flemming points out very well early on, there is a forty-year gap between when this Jesus cat supposedly died and when ANYBODY bothered to write down a word about him. The four Gospels that the Council of Nicea saw fit to include in the New Testament, were written after the destruction of the second Temple, which occurred in 70 CE. Look, I get lazy at times, too. Sometimes it will take me weeks to post something Hobart von Mike has sent me. And those are reviews of crap death metal bands, not a first person account of God incarnate walking around Jerusalem. Forty-years? My ass. Flemming does an admirable job of dispensing with
this nonsense right up front.

We learn during the course of the film that Flemming himself was once a fundamentalist Christian. He was schooled at the severely evil Village Christian School right here in the San Fernando Valley. I say severely evil not only because Flemming tells us so (by going back and interviewing the deeply thick Superintendent of the joint), but because one of my dearest friends was forced to go to VCS. Long story short, that place fucked her up for life. While we never learn exactly why Flemming himself had a falling out with Christianity, it is more than obvious that he is resentful of the brainwashing he was forced to endure while a student there. And with good cause. Essentially, and this should be news to no one, he details how Christian indoctrination scares kids shitless and discourages above all else “thinking.” VCS and really all other fundies instill this sad mode of thought by telling children about the “one unforgivable sin.” That sin is “denial of the Holy Spirit.” There are two New Testament verses that mention this and you are free to look them up. As he points out, “there’s no more evidence for the existence of this ‘Holy Spirit’ than for the existence of unicorns.” Yet, if a child were to doubt this thing he/she cannot see or touch or even doubt, well, hell awaits. To me, that’s the worst form of child abuse. And, judging by Flemming’s rage, he feels the same way.

The best parts of The God Who Wasn’t There are the people he interviews who all maintain that Jesus is a load of bullshit. Namely Richard Carrier, Alan Dundes (who sadly died a few weeks after being interviewed), Sam Harris, Robert M. Price and the co-founders of Barbara and David Mikkelson. Carrier wrote a book called Sense and Goodness Without God, and while I haven’t read it, I am sure it is inline with Robert Wright’s The Moral Animal, an excellent book on evolutionary psychology that essentially posits the human desire for “good” is not founded in religion, but rather in our biology; murderers are not tolerated because of commandments, but rather they are bad for the survival of the species. Duh. Anyhow, all interviewed are fascinating and all cut into the lie that is not only Christianity, but all religions that believe in invisible men living in the sky. Harris, takes it a step further (and really, he is the most interesting of all in the movie) by explaining how dangerous this type of thinking is. He points out that with 44% of the American population actually believing that Jesus is going to usher in Armageddon within their lifetimes, how the fuck can you convince them that global warming is a serious problem? Who needs education or scientific research when the world is going to end anyhow? He’s an articulate, American Richard Dawkins and we need 1,000 more just like him — stating the important thing, the obvious thing, which sadly no one is saying. I wish the Harris interview would have gone on for seven hours

And really, that is the problem with The God Who Wasn’t There. It’s too short! That’s why I gave is a low grade. Mr. Flemming! You were kicking so much ass! Why stop it at 53 minutes? Two hours, minimum, please! Like the whole of the film, there was a fantastic sequence that was too rushed where Flemming is outside of the Billy Graham revival that took place at the Rose Bowl last year. He is asking random people about how Christianity was spread in the early days of the church. Not surprisingly, no one has a fucking clue. Sadly but typically, they all sounded stupid as they just smiled and explained how much they love Jesus. Dandes and Price then explain that the Jesus myth is nothing more than pre-existing folklore and myth, given a new name. Legends like Attis, Mithras and Osiris do everything that Jesus did. Basically Jesus is an old story with a fresh coat of paint. Again, I could have listened to this shit for days. But we get just a taste and are left wanting. In a perfect world, viewers of this movie would look up and research and read about all it contains. In fact, Flemming goes out of his way to include web links for not only everything mentioned, but the sites for all those interviewed. However, he should have known what lazy bags of shit most people are and included at least twice as much info in the film itself.

My favorite part though, was his smart and welcomed deconstruction of Mel Gibson’s S&M snuff flick, The Passion of the Christ. Flemming points out that “singing Jesus” (Jesus Christ Superstar) and “horny Jesus” (The Last Temptation of Christ) were only marginal successes, while Gibson’s “bloody Jesus” was an out and smash hit and is going to net $400 million shortly. Flemming (without permission) treats us to some of the more brutally graphic scenes of Jesus getting his skin flayed off, where he marvels aloud how Gibson went out of his way to add in Peckinpah-style blood packs to ensure maximum gore. His point is that religious bloodlust is nothing new, yet it still sells. But why is it that the bloodiest Jesus is the one the fans want the most? And excellent question, and again, one that deserve hours of analysis. Not minutes. And, to give you an idea of how insanely bloody The Passion really is, Flemming actually went through (well, an assistant did at any rate) and counted the number of minutes where there was not some sort of vicious violence or bloody gore. After Jesus stomps the Satan-snake to death at the ten minute mark of the film, there are six minutes in the remaining two-hours. And, following the lead of that anal maniac over at CAP Reports, Flemming actually lists every instance of violence. Awesome!

While amateurish at times (enough with the Mac graphics!), The God Who Wasn’t There is so punk rock that I am willing to forgive all sins. More films like
this are needed. I mean, what is not to love about a movie that catches the man responsible for the education of 1,800 children changing his
story? Oh, yeah, so Flemming is interviewing the Superintendent of VCS and he asks the man what evidence he has that the world works in the
way that Christians say it does. The answer? None. It’s a faith issue. So, Flemming then asks, isn’t that irresponsible? The Superintendent,
rather than answering, gets mad and ends the interview. It was beautiful and typical. And I wanted more of it! Still, even at its
short runtime, The God Who Wasn’t There is worth your while. I mentioned above that we need more people like Sam Harris. While true,
we also need more Flemmings! Oh, and there is a short interview with Richard Dawkins on the extras track, to boot. Highly recommended.