I want to die. Not at a ripe old age after a lifetime of fulfillment and great adventure, but now. Preferably in a warm tub Frankie Pentagelli style, quickly realizing that sweet, sweet release. The moment I feel I have seen the worst Hollywood has to offer, they drain the sewers and find something even more heinous for my ready consumption. I realize that I no longer possess any credibility given my weekly declarations, but I am confident I will not see a more abysmal motion picture all year than Martin Brest’s Gigli. I reveal Brest’s name only because it is important to know that he is also responsible for the mind-blowingly retchid Scent of a Woman, a film — not The Godfather Part II or Dog Day Afternoon or Glengarry Glen Ross — that finally gave Al Pacino his Oscar. I never thought Brest would sink even lower than that ham-fisted mess, but with Gigli he has managed to prove once and for all that his fortunes in Hollywood are solely the result of hundreds of efficient, earth-shaking blow jobs administered with remarkable skill and relish. He is a hack — a vile, malicious, nun-fucking atrocity of a man who should be stripped of his skin, boiled in the corn-filled excrement of his children, and fed to the cast and crew of this film. Pick any dozen drooling, shit-eating retards at random and they could bang out a script with more wit and basic entertainment value than this insipid crime against cinema. I am simply too angry; too disgusted with myself for having spent two precious hours with this film; too annoyed and saddened to continue. But you must be warned. Death stalks us all, and he is playing at a theater near you.

I have more respect for Pat Robertson at this point in my life than I do for either Ben Affleck or Jennifer Lopez, what with their constant preening before the cameras and their insistence that we give two shits about their impending marriage and soon-to-follow divorce. They are horrible, horrible people and the last thing I should have wanted to do is watch them flirt and kiss in some movie purporting to be a romantic comedy. Ben plays Larry Gigli, a tough-on-the-outside-but-vulnerable-softie-on-the-inside mob contractor who is asked by a low-life named Louis to kidnap the retarded son of a federal prosecutor in order to force him to drop his case against an even bigger mobster. Because Louis does not fully trust Larry, he assigns a second person to the case, a no-nonsense lesbian named Ricki, played by Miss Lopez. I shouldn’t have to remind you that they hate each other at first sight, only to end up in bed with each other less than half an hour later. But before they get to that criminally dull sex scene, they fight, bicker, debate the merits of the penis and the vagina, and act-with-a-capital-A in order to convince us that they have any chemistry whatsoever. It doesn’t help matters that Affleck has no charisma and his portrayal of a tough guy is about as convincing as Lopez’s as a sentient being. While they protect the retard and try to please their boss, J-Lo’s jilted lesbian lover shows up, screams a bit, and proceeds to slit her wrists. Needless to say, her act was the only instance of moral courage throughout the film as I empathized as never before. Alas, the dyke survives after a trip to the hospital, but she doesn’t show up again. 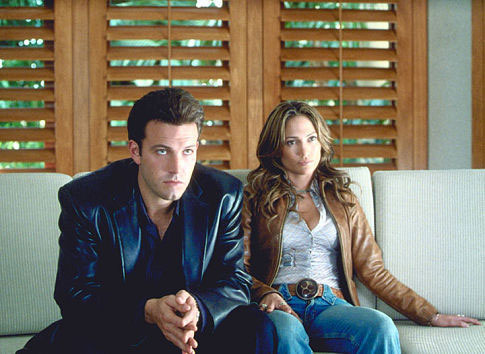 But wait, you might be saying, did Matt mention a retard without commenting further? Where are the calls for genocide or at least a crude, back-alley sterilization of the simple sap? I did indeed bring him up, and while I have rarely been as offended by an on-screen manifestation of mankind’s greatest blight, I was more often than not paralyzed with a rare, voiceless shock. The ‘tard, Brian, is obsessed with Baywatch, sings rap songs, needs to eat constantly, and is actually taken seriously by the filmmakers. He is, I assume, supposed to be funny (I heard people laughing in the theater whenever he spoke, but these are also people who say, “Where were you when…” and are speaking of Dale at Daytona rather than Jack at Dealy Plaza), but there was enough swelling music to indicate that he is also a Wise Half-Wit, in addition to being comic relief. Both Larry and Ricki grow to love the childish slob, and even when they are directed to chop off a finger and send it to the prosecutor, they cannot execute the deed. Nothing I saw on screen would have stopped me from chopping the velvet-rubbing fucker’s arm off, so I am at a loss as to what changed the two character’s minds. The direct implication is that he is yet another idiot savant who has lessons to teach us all, which in reality would mean nothing more than how to cram boogers, hot dogs, and crayons into one’s mouth without choking to death — but in Hollywood that means Life Lessons, or how we can change despite the odds. They must look in his Kool-Aid stained, snot-crusted face and see innocence personified, but all I see is yet another reason to shout godlessness from the rooftop as no universe with justice as its main goal would allow these creatures to continue their dopey course.

Larry and Ricki fall in love, which must mean that Larry has the power to convert even the most steadfast of lesbians. Or, more probably, Ricki is a “lesbian” only in terms of providing the male members of the audience with a masturbatory fantasy for later that evening. Sorry guys, but most carpet-munchers look like Camille Paglia on a bad day, not J-Lo in a tube top, so don’t think that you’ll have any conversion opportunities down at the laundromat. There are also two unnecessary cameos from Christopher Walken (as a cop) and Al Pacino (as the “Big Boss”), doing little but reinforcing their images as a creepy nutcase and overacting ham, respectively. Explain this piece of dialogue from Walken, referring to ice cream: “Put some on your head and your tongue slaps at the roof of your mouth to get at it.” Or something like that. And all Pacino does is scream and put a bullet through a man’s forehead. Keep shining the little golden man, my dear Al. And we also get to see Lopez stand up to a bunch of surly teenagers at a restaurant, after which Affleck breaks a kid’s laptop while shouting, “Suck my dick dot com.” Are we sure that Paddy Chayefsky wasn’t available for re-writes? It’s all so terribly boring, as the two keep out of harm’s way, stare longingly into each other’s eyes, and, of course, drop the retard off at the filming of a program that appears to be Baywatch. All I know is that the film, rather than mercifully ending ten minutes early (it’s already a shade over two hours as it is), actually spends time with the dipshit as he walks down to the set, escapes unnoticed (after all, who would notice a retard among hard-bodies and beach bunnies), and dances with some hot Australian chick. This is supposed to mean something because the kid called an Australian weather lady throughout the film, presumably to show that despite having the intelligence of a slug, he too was lonely and had dreams and stuff. I knew this because when the fool tried to tell Larry about the calls, the musical score swelled with sentiment. The dancing is as you would expect, complete with Larry looking on with joy. Ricki even shows up to give Larry a ride, and the two drive off into the sunset.

If my review gave even the slightest impression that the story had any coherence, I apologize from the bottom of my heart. Few moviegoing experiences with offer you such outlandish waste and bloated star-fucking as this inevitable Razzie winner. Nothing that occurs has any weight whatsoever, and the proceedings are held together only (and barely) by the massive egos of the two leads. The characters they play are so lacking in anything that might be called human that only their Mengele-inspired on-screen torture could have proven that if pricked, they do bleed. What they say does not reach us, what they do does not distract us, and what they are does not move us or allow us any hope for humanity. The film’s sole intent — to sell us on the notion of Ben and Jennifer as a celebrity couple — is pure, unadulterated arrogance of the highest order. Sick, sick minds devised this shrill, disastrous misfire, and no one involved should ever be forgiven.