Written and Directed by Eli Roth

Would you pay $25,000 to torture and kill an American? Its an intriguing question, and one made that much more pointed given that most of the world would gleefully answer in the affirmative. Still, Eli Roths sick, unfeeling, slaughterhouse of filth is more than mere fantasy; in fact, it holds a dual purpose, both of which escort this demented little film into the penthouse of the genre. It may seem old hat for me to applaud a film that celebrates blood and bile, but this time around, theres more than just the multiple orgasms attached to watching idiots and cretins breathe their last. Sure, theres that vicarious thrill; that inescapable charge that only movies can provide, and to deny that I was entertained would be the height of hypocrisy. Im a liberal humanist, yes, but I find no contradiction in the sweat that forms on my brow as I watch decidedly fictional recreations of mans inhumanity to man. So before I entertain a few wild ideas concerning the deeper meaning of a film likely without a brain to match its brawn, do not believe that this movie is anything other than 2006’s first genuine madhouse. Its more fun than a craps table at a whorehouse; more dastardly than an unregulated Republican; more ferocious, even, than an unmedicated octogenarian. And yes, Ill be putting this erection to good use.

And so we move on. Hostel, above all, is a bitter indictment of capitalisms amorality; the undeniable endgame when an unchecked free market is allowed to make its own rules. Yes, there is the belief that with buying and selling driven to their logical extreme, human beings will literally sell each other, but more than that, this is the ghost of Karl Marx shoving aside his coffin lid, digging through the soil, dusting off his topcoat, and reminding the world of his betrayed vision. Its no mistake that this movie spends its most gruesome hours in the hellish remains of Eastern Europe; a swath of earth so poor, desperate, and depressing that many now feel nostalgic for Stalin. Sure, millions disappeared under the Man of Steels reign, but in spite of the gray, drab uniformity, a sense of order prevailed. The Soviet bloc, for all of its brutality, repression, and indefensible contempt for individual will, stood proud before the world as a force so threatening that the mighty United States spent all of its free time in pursuit of their destruction. Liberty stood aside, of course, but is the chaos of freedom any better? Take away centralization and military might, and men roam the countryside like packs of wild dogs; exploiting the weak, leaving children to their own devices, and turning death from a means of social control to a profit-driven parlor game. I ask you: which is worse? Fine, perhaps historys maddest madman, but Ill not go beyond perhaps. 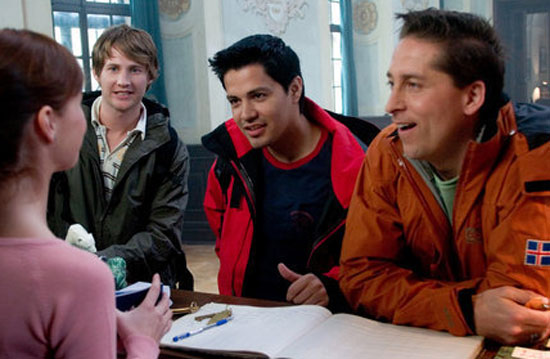 The hostel in question is a classy joint where tourists arrive, tourists disappear, and just as quickly, reappear in a wasteland of horror where the rich and powerful pay good money to take the man or woman of their choice and, well, do whatever they want with them. Customers are provided assorted tools and instruments, from drills to pistols, and there are no rules regarding methods. You may kill upon entrance and leave with a wry smile, or you may roll up your sleeves, relax, and destroy your victim piece by piece. Slash an Achilless tendon, pluck out an eyeball, carve open a chest, or even pound nails into foreheads. The world is your oyster. Unholy screams that penetrate the night? No one will interfere. And as for the mess, a dutiful hunchback will soon stop by with a mop and a cart, which he will take back to his parts room for further dismemberment. From there, its on to the oven, where all traces of flesh and bone will disappear into the already polluted sky. And that smell? Its Slovakia, baby, and its just another day at the office. Its a bit filthy, needless to say, but the whole thing is run with the efficiency of a Fordian assembly line. And without infrastructure, exports, or an economy of any kind, thats the only game in town. And by the looks of things, theres no danger of the doors closing.

The three friends we follow — Paxton, Josh, and Oli — are backpacking through Europe, which is just an excuse, really, to fuck foreigners and smoke a lot of pot. Theyre about as interested in museums, local culture, and history as the busloads of school kids who stare glassy-eyed at paintings they couldnt hope to understand. I never have understood traveling 6,000 miles to do what one does at home, but thats your average dimwit for you. These fools — two Americans and one Icelander — are fleshed out only to the extent of making them prime for the butcher, and that stands to reason. One kid seems to be latently gay, but we figure they all are when they compare cocks and draw faces on their ass cheeks for each others amusement. They deflect attention away from the homoeroticism by bedding chicks, but no ones fooling anyone. Once they arrive at the hostel, there are chicks waiting in their room, and this fulfills their expectations, as they were told this country was filled with desperate, horny women. From there, the young men follow them to a spa, where tits explode in every corner of the frame, and we are at once thrust into the ultimate male fantasy world. Hot women who care so little for simple human interaction that their only interest is fucking like banshees? Those crazy Commies sure know how to dupe us poor bastards, and these particular dipshits are so deluded that they think theyve discovered Shangri-La. Paradise without risk? Eden without cost? Such dreams must always end in tragedy. 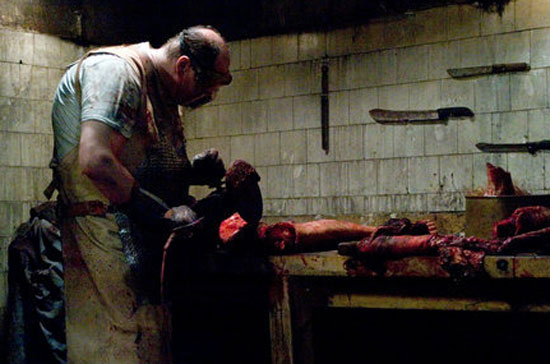 One by one, the young men disappear into the bowels of the torture chamber, and only Paxton survives intact (well, minus a few fingers). The final act contains standard chases, rescues, and retrievals, but the clichés do little to stifle the excitement. Even the Asian girl who is saved ends up jumping in front of a train (oh my, what a glorious holocaust of bloody crunch), largely because she catches a glimpse of her disfigured mug (shes missing an eye and is severely burned). Paxton also becomes as bad as the killers, for when he discovers the customer who killed his friend in a train station bathroom, he executes a bloodbath so righteous that I would not have minded a standing ovation. Im even inclined to think that once he too has tasted death, he will move back to the former Iron Curtain and open his own sadistic playpen. Alas, Paxtons two buddies were turned into experimental slabs for wannabe medical examiners and solitary heads for display, but he just might tell their tale. Their deaths will receive the proper attention.

So what in fact was the second revelation? Obviously, human beings are not all assassins and savage killers, but the potential remains, and only a fortuitous avoidance of true desperation keeps our hands clean. What would we do to feed our families? If law and order took a holiday, what would you try to get away with? And who hasnt imagined removing someone from the face of the earth? Even a random stranger who just annoyed you that particular day? We glimpse a few men — and of course, only men would want to do shit like this — as they prepare for a session or leave the joint, but thankfully, a complete explanation is absent. We can guess, of course: perhaps one guy was fucked by his father, or another raged against women for his impotence, or another was a soldier who craved a return to the lawlessness of battle. It doesnt matter, really, as the history of our species needs no further explanation. We are such brutal, ruthless killers that the only real question becomes: how on earth have we managed a break in the chain? Instead of asking why we drop fire on the helpless and the damned, should we not inquire about those periods of peace that seem to violate our very nature? Its sort of like coming across a happy marriage; we know they exist — in theory — but they are so unnatural that we shake our heads in disbelief. Ah, but divorce and bickering; those things appear so very normal. Hostel might seem to be extreme and cinematic, but its all too plausible.

So if tits, death, and sharp objects arent enough to drive you to the theater, perhaps you should venture to something more naive and comforting. But I assure you — theres more insight and truth in any random five minutes of Hostel than the entirety of tripe like Cheaper by the Dozen 2. And its no stretch to suggest that the formers conceit (freedoms just another word for someone left to kill), is less dangerous than the latters (large families are havens in a heartless world). Hell, even take this lesson to heart for Iraq. Saddam Hussein lorded over his nation for his own ego and bloodlust, but in his place is the pitiless chaos former Soviet satellites understand all too well. And when the years roll by and the electricity stays off, unemployment continues to hover around 40%, and scarcity blocks out the sun, let us put off registering our surprise when Baghdad airport receives such men as these; armed with much-needed cash, and hoping to find a few unwitting souls on whom to inflict all the suffering of mankind. Or simply a shitty childhood.