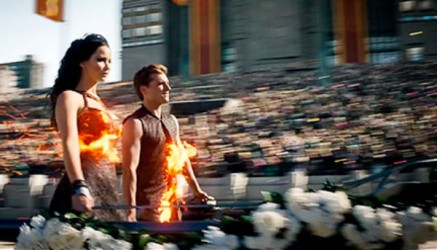 Not appearing in this film: subtlety.

Fair Value of Catching Fire: $24.00. As dark and unrelenting as you can get for teenage popcorn entertainment, most comparable to Harry Potter and the Goblet of Fire. 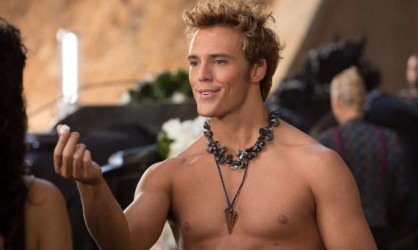 Joey, have you ever been in…a Panem prison?

Joey, Do You Like Movies about Gladiators? Susan Collins’ Hunger Games franchise profits from a classic approach to trilogies: in the first movie, you introduce the premise (blood sport in dystopia); in the second movie, you intensify the premise (the contestants are hardened veterans! loved ones are hostages!); in the third movie, you blow everything up.

This film works for dramatic similar to what made Empire Strikes Back. Both films are continuous rear-guard actions against a relentless oppressive force, in which our cinematic conditioning primes us to expect victory, but in which the character instead only narrowly survive. Catching Fire lacks the mythical moments of Empire– nothing as engrossing as the Cloud City or the AT-AT Walkers. But it has a similar suspense, of wondering how Katniss (and even moreso, her ineffective male counterpart Peeta) are going to survive this next turn.

The history of American films about science fiction gladiators tracks to the dominant form of entertainment in the public mind. We have an ongoing fascination with seeing a fatal version of our major entertainment. In 1975, Corman’s Death Race 2000 was partially exploiting the first wave of NASCAR popularity. Rollerball, at the same time, posited that professional sports franchises would evolve into team based gladiatorial combat. In 1987, The Running Man suggested game shows as the model for future combat. The Hunger Games is reality TV as bloodsport, specifically the likes of Survivor. Like in Survivor, the conscripted tributes rapidly form competing teams. Better ratings leads to more equipment as Katniss and her crew traipse through the jungle lagoon.

Katniss (Jennifer Laurence) is the raspy exception to the rigged Hunger Games, an annual festival in the dystopia of Panem, a vision of the USA turned into North Korea. Ordinarily, the games are won by a champion from the Capitol. But not only did Katniss defeat the more trained Career Tributes, she pulled another survivor through. Her defiance must be punished, and that punishment comes in the form of a Quarter Quell: The next annual Hunger Games is done not with fresh faced teenagers, but instead from a selection of surviving champions from prior Hunger Games.

Many will compare Catching Fire to the Japanese Battle Royale franchise, but while there are strong parallels, it’s a case of identical motors charting different voyages. Battle Royale is taking the microcosm of a high school social environment and upping the dramatic ante by giving everyone weapons and forcing them to kill each other. The Hunger Games is about the vicissitudes of celebrity.

Think about it: a girl is picked out of random from a middle of nowhere town; on the basis of her talents, she is forced to vie against others of similar age and talent; to survive, she must seek sponsors and to become an audience favorite. To continue surviving, she must adhere to projected romantic narratives with a pre-contrived love interest, rather than pursuing her own interest. Am I talking about Katniss Everdeen, or a contestant on The Voice? Add a little more singing and a little less arterial blood spray, and Katniss would be another American Idol. 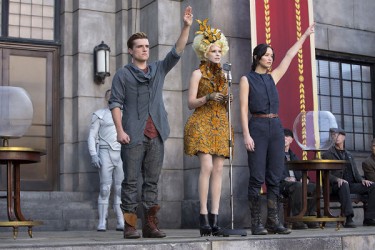 My Home is the Thunderdome:

I get it, evil future dictators. You like gladiatorial death-matches because they allow you to entertain the public while slaying your opponents. Do you know a better way to kill those two mockingjays with one stone? Play the Benny Hill music as the soundtrack every time you televise an execution.

Panem, like Airstrip One, is a non-ideological totalitarian nightmare; we never get a sense for why anybody believes in the worth of the system. Collins also borrows heavily from the works of Margaret Awood. The women of District 12 favor dowdy cotton house dresses that wouldn’t be out of place in The Handmaiden’s Tale; but more importantly, the world of The Hunger Games features genetically engineered lifeforms run amuck through the environment. This time around, it’s steroidal mandrills and birds that scream with human voices. There’s an intriguing neo-Romanism going on (most of the Capitol characters have Latin names).

But to the degree that Panem appears to have any ideology, it is that the sociopath is the ideal man. Certainly, President Snow (Donald Sutherland) is a complete sociopath; he determines to destroy Katniss because she can never be sufficiently genuine in her faked enthusiasm for Snow’s propaganda. Patrick St. Espert steals his one scene of the movie, playing a military officer so brutalized that his only language is violence.

At the same time, the lack of a belief system makes Panem generic as a villain. Say what you will about the tenets of Death Eaters, but at least it’s an ethos, man. Likewise, the Norsefire party in V for Vendetta (another film about a young woman in a totalitarian dystopia) is a clear worst case scenario version of British parties like the BNP and the National Front. If we had a better sense of what makes the people of Capitol willing to so ruthlessly oppress the other districts, Panem might be more memorable. 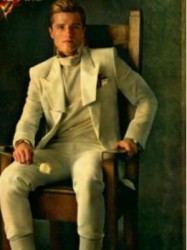 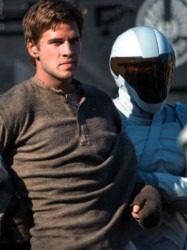 The last part of the Hunger Games tripod is way there are still feminine interludes woven through the oppression and cruelty. The books spend lavish paragraphs in detailing the dresses that Katniss wears, and the feasts that are served; this film eschews the feasts but plays up the fashion. The innovation of The Hunger Games trilogy is that it mashed up aspects of other popular young adult books and channeled them into a female protagonist. Katniss has to largely devise the means of her survival from her surroundings, like the protagonist in Gary Paulsen’s Hatchet. Her hometown, District Twelve, is a depressed pre-industrial crapsack, a la The White Mountains. And of course, what Young Adult franchise would be complete without a love triangle of having to choose between the kind bourgeouis urbanite Peeta (Josh Hutcherson) and the brooding, muscular Gale (Liam Hemsworth)?

In the end, the stakes (the survival of everyone Katniss ever cares about, many of whom becomes hostages) are what elevate this franchise over it’s contemporaries. It’s a movie about what you do to survive, and how the brutalized survival instinct already drilled into Katniss ultimately become the tragic flaws which prevent her from having triumph instead of mere survival. That aspect alone- how Katniss’ virtues of independence also undermine her- distinguishes her from other strong independent female protagonists. She’s far less empathic and socially adept.

The action choreography is much improved, lacking both the ‘shakey cam’ and excessive CGI reliance. The cinematography is limited by a flat blue-grey color palette, but the framing and shots of director Francis Lawrence is much better than the previous film, which was too heavily adherent to the camera styles of reality TV. The third thing that really lifts Catching Fire above The Hunger Games is the acting of the ensemble. Elizabeth Banks does a great turn as the show host Effie; Jena Malone, as Johanna Mason, is a portrait of a dark possible future of Katniss; Phillip Seymour Hoffman, as Gamemaster Plutarch, is a wonderfully slimy subversive. In many ways, the rest of the cast serve as a spectrum of approaches to rebellion and subversion- everyone is trying their own strategy to overthrow the government, separate from the rest, with varying levels of success. It’s a pity that the film is limited to the perspective and narrative of the most naive of the two ingénue protagonists; but that’s what happens when you’re making 1984 for young girls with ADHD.

This film is an intriguing pastiche of prior dystopias, and a solid, engaging film, one of the better blockbusters of a dismal year. It’s worth your while.