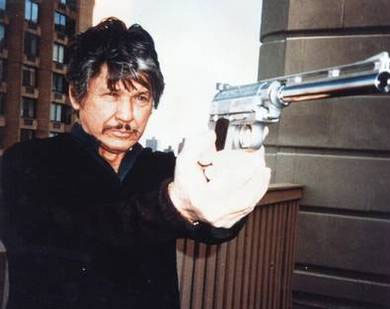 Despite what my wife or Jonny might say, I am a practicing heterosexual, but such things might have been in doubt had the opportunity come about to spend the night with Charles Bronson. Old Chuck was hardly the most handsome action star to come out of Hollywood, nor was he particularly articulate or lively. But he was a man. A big-dicked, barrel-chested, shut-the-fuck-up-or-I’ll-kill-you sort of man. A man who killed without apology, or even the decency of a one-liner. Whether for revenge or just for the pleasure of watching a human being breathe his last, Bronson killed more people than any single actor in the history of cinema. It is a lasting testament to the power of Bronson’s heartless brutality that I always remember his face before, during, and after a killing — devoid of emotion, hard, stoic, deeply lined, and robotic. A hard-assed, no-nonsense killing machine. That is Charles Bronson, and that is why he made me smile.

It stands to reason that I loved Bronson primarily for his work in the Death Wish series third installment still standing as one the most enjoyable films ever made), but he made many action films that, while lacking in artistic integrity, managed to soothe all those lonely viewers who longed to see scumbags, rapists, and sociopaths meet their just ends. Bronson, regardless of the character he played, was acting for all of us — the dispossessed, the powerless, and the scared — as he took control of a violent society and made it just a little bit safer (not overall, but for those of us who preferred illusion over reality). The body count actually increased with Bronson on the streets, but at least the dying were those we could readily identify as criminals and losers. And Bronson was no bigot. He killed blacks, whites, Asians, and Latinos. He blasted young and old alike, and he often made no distinction between crimes. A rapist was just as good as a murderer, so long as both were good and dead. Hell, the Giggler in Death Wish 3 was only a thief and he got shot in the back with an elephant gun. 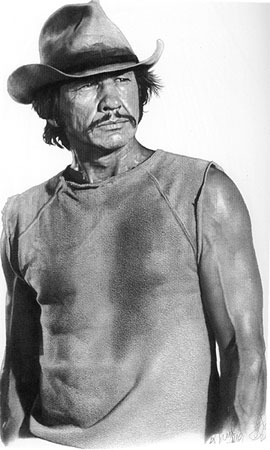 Bronson appeared in several great films over the years (The Magnificent Seven and The Great Escape being the most prominent)[Ed Note: Don’t forget The Dirty Dozen] and one undisputed masterpiece (Once Upon a Time in the West), but for most of his career, he quietly picked up his paycheck, said as little as possible, and murdered people by the hundreds. He rarely exploded in rage, never shot a woman that I can recall (although he indirectly cost many their lives by insisting on a quickie romance), and only in the TV movie Family of Cops did he ever shed a tear. Bronson was always the most masculine individual in any given scene, and he never had to force the issue. You just took one look at him and knew that he would not hesitate if he felt it was necessary to put a bullet in your brain. He’s been a melon farmer, an architect, a boxer, and a reporter, but never has he been anything less than a God. He simply commands worship.

What about his biography? His childhood or family life? Frankly, I don’t give a shit, nor should anyone else who claims to love film. Bronson only existed on screen and to imagine him fixing dinner or reading the paper with the kids is simply too much to bear. Bronson didn’t have a loving marriage for all I care, for all of his girlfriends and wives were raped and murdered, leading to righteous vengeance. Bronson didn’t have any kids, as they all jumped to their deaths after being raped by Larry Fishburne. Bronson didn’t go to the store or work for a living, because he was too busy ordering weapons through the mail or riding the subway while hunting fresh game. And please, don’t tell me about his death, or even that he felt sick or weak or powerless to prevent the rush of disease. Charles Bronson was and is — and will always remain — a man who could solve every problem facing our world with the barrel of a gun. He hated negotiation, loathed conversation, and would rather die than go through the courts. Charles Bronson gave us an America full of gun-toting, death-obsessed introverts who didn’t need sex, didn’t need domestic comforts, and didn’t seem to have any interests whatsoever except putting lead into other human beings. And I loved him for it.

I have a favorite Bronson story. Both Bronson and the Swedish director Ingmar Bergman had the same agent, Paul Kohner, and the same publicist, the legendary Ernie Anderson. When Bergman left Sweden in a well-publicized dispute with the tax authorities, he visited Los Angeles for the first time, and asked Kohner to arrange a visit to a studio.Bronson was making an action picture at the time, and Kohner assigned Anderson to arrange a meeting between the two clients. Anderson was hesitant, because Bronson sometimes kidded him: “I know this isn’t a Bergman picture, but it may make a few bucks.”After he introduced the two men, Bergman asked him to explain the scene he was doing. “This is the scene where I get shot,” Bronson said. “I have these little squibs that explode to make it look like bullets are hitting.””Fascinating,” said Bergman. “I never knew how they did that.””You mean,” asked Bronson, “you don’t use machine guns in your movies?”