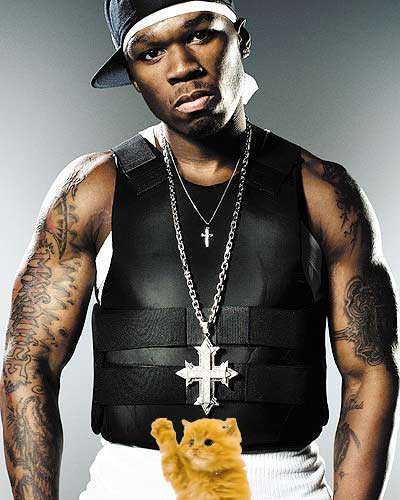 Steven Schultz: So Fifty Cent, thanks for meeting with us. I know you’re real busy recording your new album.

50 Cent: No problem. I’m just excited about the whole scenario right now. I’m positive this is the best shit I ever did.

SS: Well, that’s what everyone’s been asking about. What’s Fifty going to drop next?

50 Cent: See, I’m going to tell it like this now. I’m going to tell it just how it is. your average rapper, He spend the whole album talking about how tough he is, how many bitches, how many gats, all that stuff. But 50 Cent ? I’ve been shot, I’ve been to jail, I’ve made a hit album, I got ten million dollars, I’ve played shows in all the different continents on the planet, you know. By any definition, I am the real deal. Any way you want to judge a rapper ? money, skills, street knowledge. I’m there, ma. So why should I continue to have to prove myself on my new album? You feel me? A real man doesn’t have anything to prove. Fifty cent is already the top dog in this game.

SS: (laughing) I hear you, man. You got to the top of the mountain.

50 Cent: See, that’s what I’m talking about. Now that I cleared out all the competition at the top of the mountain, I finally got a little elbow room here to speak on what I REALLY concerned with.

50 Cent: Unicorns and ponies, man. That’s what I’m into right now. I’m telling you straight, man. I like petting ’em and hugging ’em and watching ’em fly around the rainbow with like little flowers all up in their grill.

SS: Man, that is… that is the most homosexual thing I have ever heard. Are you joking?

50 Cent: LOOK IN MY EYES MOTHERFUCKER. Am I JOKING?

SS: Hey I… I just… Man, I’m… I was just a little surprised. I’m sorry man. I didn’t mean any disrespect by that. I was taken by, by surprise is all.

50 Cent: You’re god damn right. I’m taking everyone by surprise with this new joint. Did I scare you, man?

50 Cent: Na, na, it’s all good. don’t worry about it. ahahaha– See, that’s my point. I’m the only man in this rap game who could do a whole album about unicorns and herbal tea and shit, and you’re still scared to talk shit about it. that’s my new concept man. . .

50 Cent: . . . while, on the other hand, if I have to keep telling people, “I’m still hard, I’m still hard . .’ THAT would be showing weakness. I already made my bones in this industry, I’m not weak, and that’s what I’m representing on my new album “I WUV UNICORNS AND PONIES.”

50 Cent: What? Who told you I was talking slang? Rappers are always getting misquoted in the press. There’s no media responsibility. Don’t be making me say something that I never said. Consistency is the key to all success. That’s why fifty cent has always kept it real, and I will continue to keep it real. And that’s why, when I say unicorn I mean, ma, I mean a REAL motherfucking unicorn, with soft fluffy fur and big cute eyes and a REAL golden horn with magical powers, that I REALLY like to hug and kiss.

50 Cent: Oh, you believe it. Not everyone can see them, though. You can only see them when your heart is pure. Or you can just get em from the black market. Whichever, it’s all good. I’ve got two already. My account says they count as a investment.

SS: OK, I can adjust to that. But Fifty, I think your fans will want to, uh, know how you got the idea for your new, um, concept here. can you help us out here?

50 Cent: Yeah, I can do that. It’s really simple. I came up with I WUV UNICORNS AND PONIES” two months ago. It was just a flash of inspiration. I was fed up with rap at that time. I was, “Yo. I’m sick of beating Ja Rule and Puffy and all these other weak little MCs. It’s too easy. The thrill has gone, man.” I was, that was my personal vibe at the time we created this new concept. I was like, “The rap game has gotten too soft. These motherfuckers are so easy to beat, I’m losing my edge. If I want to keep my edge, I have to give these wankstas some handicaps. Straight up golf-style. Get up on some golf shit here, ma. Give em a good 3 or 4 holes head start, and I’m-a play with just a putter, even in the sand trap. Know what I mean?”

SS: So that was your solution to the, uh, rap doldrums.

50 Cent: Heah. just, give the other guys a big advantage, to keep my game tight.

SS: So you’re still on Shady records, a division of Aftermath. How did your partners deal with your new, uh, direction?

50 Cent: Well, it got a little . . Theo, my attorney and Paul Rosenberg, Em’s attorney, had a meeting. I think Theo wasn’t happy about the horn I had him wear, but I was like, Fuck it. We have to show them we’re serious about the new concept. Besides, man, that horn was Armani. Tasteful, you know. High class. The whole nine. So they had their meeting, then Rosenberg talked to Em, who talked to Dre. I have to say Em was always supportive. Just 100% down with the whole idea. He’s always got people telling HIM, do this, do that, you know, getting in his mix. And I think this give him more respect for the creativity process of other artists.

50 Cent: Well, Dre was, ahahaha, um, it got a little hectic with the scenario there. At first I thought he had a problem because of the content being, you know, unicorns. Or he had a problem with my new falsetto flow. He was all, naah, naah, and all that. But later I found out he was just against it because secretly he’d been working on his OWN unicorn album, you know, and he thought I was going to steal his spotlight!

50 Cent: Hahahah, don’t worry, ma. I’m straight. Anyway, like I was saying, Dre thought I was trying to cut into his action. But I persuaded him that I was just, like, going to get people accustomed to the magical world of caring, sharing animals. You know, so he wouldn’t take so much heat for it when HIS joint came out. So he cogitated on that for a while, then he was cool with it. He knew he had his place, and I had my place. Actually recently we sat down and listened to the sneak preview of THE MOTHERFUCKIN DOCTOR PRESENTS: MR. CUDDLEY PONY AND THE CANDY RAINBOW. And I can say, ma, that Dre’s new shit is just blazing. Both in terms of the production and the cute cuddliness.

SS: So it looks like it’s going to be a summer of hits in 2004. (barely audiable snicker)

50 Cent: Well, I’m dropping WUV around 23d of July actually. We already shot the first video, ma. I don’t want to give away too much, but It’s got me playing with some animated forest creatures, and then I give birth to a kitten.

50 Cent: (picking up interviewer’s head like puppet) “Thanks for your time, Fifty Cent! I enjoyed interviewing you.” (back to his own voice): You’re welcome, ma. Thanks for having me. Yo, everyone, pick up I WUV UNICORNS AND PONIE$ 23d July.