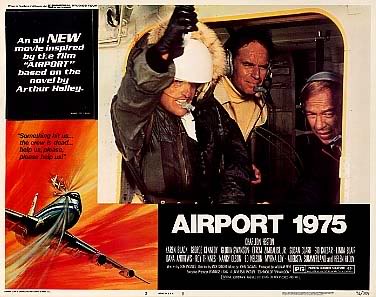 No, this is not a trend that should cause you great concern, so I promise that I will stay far, far away from both Airport ’77 and Concorde: Airport ’79. As much as those films hit the guilty side of my pleasure center, they do not touch the sheer absurdity of Airport 1975. First of all, it has the audacity to be 1975 rather than ’75, which seems to imply greatness or respect, although I’m not sure how, exactly. Second, it features Charlton Fucking Heston as arguably the most macho human being who ever lived, and I’m not just talking about the silver screen. Outside of treating his cross-eyed lover Karen Black as a ragged piece of meat, he rescues a plane full of half-baked celebrities by sheer force of will. That, and he pulls alongside a pilot-less plane and jumps through a hole in its side. Even I was hard as a fucking rock during all this. Did I mention that this was done while wearing a turtleneck?

Of all the Airport films, this is the best example of “famous folks in peril” that helped define the disaster era of the 1970s. We have the remarkable Gloria Swanson, pissing away her Sunset Boulevard comeback 25 years later by coming across as a loony narcissist. If I had to hear her talk about Cecil B. DeMille one more time I’d be tempted to bring down the plane myself. Apparently her character is writing her memoirs, although no editor on earth could organize her half-mad ravings into something even remotely readable. As if that’s not bad enough, we must look up her dress at the end after she slides down the safety chute.

We also get Jerry Stiller as a screaming hysteric, which is just about every character he ever played, up to and including Seinfeld; Sid Caesar as his usual unfunny self, gulping with panic before he passes out for the entire flight; Norman “Mr. Roper” Fell as another drunken idiot; Linda Blair as a dying girl in need of a transplant; and yes, a singing nun, remembered only as she was portrayed in Airplane! Even George Kennedy is back, only this time his wife and son are aboard, which means he will have a scene where he rides atop a fire truck with the gusto of a man possessed. Old-timer Dana Andrews portrays a heart-attack victim who crashes his small plane into the cockpit, thereby causing the accident that kills that Mexican dude from CHIPS and also blinds the pilot. Not only is it a pleasure to watch Erik Estrada killed so senselessly, it warmed my heart to watch rear-projection that didn’t even try to look authentic. Hell, I don’t even think it was the same film stock. But that’s what disaster films were all about.

So we cut back and forth between an increasingly agitated Black and the people trying to help her land the plane. We always know that Heston will bail the poor woman out, but not before a less masculine pilot is killed trying to board the doomed jet. And of course, it was a great pleasure to hear Heston call Black “honey” no less than 115 times in the course of two hours. One wonders if it was in the script or simply that Heston refused to do any movie that made a dippy broad his equal. Thank Christ we didn’t have to endure a love scene, although the series would insist that we watch a sweaty George Kennedy screw some Mrs. Roper look-alike while both grunted on a bearskin rug. But that would have to wait for the Concorde film. As would Charo.

Again, I love these films. I have seen all or part of Airport 1975 at least a dozen times and if it were on right now, I’d catch at least 15 minutes of it. It’s simply impossible to dismiss. It’s not really all that entertaining, at least not in a dramatic way, in that we know the plane will land safely and only the least appealing celebrities will court death. The dialogue consists only of words related to panic, hope, fear, and eventual relief, and I’ll be damned if any of the side stories mean a thing (unlike the first film, where we gave a shit about the soap opera dramatics against all common sense). After all, it’s hard to give us back stories when the film rarely leaves the plane. So why in the fuck would I review such a ridiculous film? Just because I think it’s important to take a step back into the past and confront true cinematic horror — without irony, without self-parody, and without the good sense to know that it sucked big hairy ass.