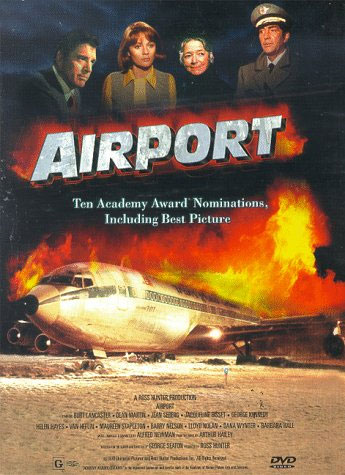 There are times, against all logic and good sense, when the putrid and the profane can serve to uplift us; to take us into a world from which we would rather not return. I had such an experience just the other night and no, it did not involve pornography. The hour was late, my eyes achieving that advanced state of heaviness that leaves one feeling semi-intoxicated, and yet I did not–would not–head to bed for some much-needed rest. Instead, I stayed up watching, hypnotized by as it were, the god-awful bliss that is Airport. No, I did not mean to type Airplane!, and no, I am not speaking with ironic detachment as if citing kitsch is somehow indicative of my hipness. I loved it; genuinely and with good feeling. I had seen Airport years ago, and my only memory of the event was that it was clearly the worst film ever nominated for Best Picture. (That title has since been captured by the militantly offensive Erin Brockovich, but I digress.) My memory had indeed failed me, for Airport is one of the most watchable films of all time; a champion of melodrama and overwrought dramatics to be sure, but compelling in a way I had forgotten. This was a film that enveloped me at that late hour, and while I had only intended to catch a few minutes and check out, I found that I watched the entire 137 minutes without interruption. It is that good.

Of course the interlocking stories are laughable, as one would expect when forced to accept Dean Martin as an airline pilot (let alone a sober one), but each character presented–simplistic, stupid, cheesy, whatever–has its own appeal. Take George Kennedy as the airport mechanic. His job throughout the film is to help get a jumbo jet from the runway that is stuck due to a freak snowstorm. He chomps on a cigar like a madman, and spends the entire time bitching, picking fights, and expressing remorse that he has to keep “a dame waiting at home,” in his words. He throws around terms like “dame” and “broad” so gleefully that I was transported by the sexism. And don’t get me started on the scene when he is thrusting and bumping in the pilot’s seat as he tries to push the plane forward. His raw masculinity is clearly from another time; only in the 1980s were we this accepting of such overt homoeroticism. It stands to reason then that Kennedy was the only character who appeared throughout the Airport series.

And then there is Burt Lancaster, putting his job ahead of his marriage and agreeing to a divorce because yes, he’d rather discuss airplanes than play with his children. Can you blame him? Or the aforementioned Dean Martin, a charming pilot who must deal with bad weather, mad bombers, and an injured flight attendant who happens to be his lover, who also happens to be pregnant with his child. As they talked before takeoff, it was wild to hear Martin discuss “taking care of the problem” by having to fly to Sweden, as this was indeed a pre-Roe America. Or the annoying stowaway Helen Hayes (who shockingly won an Oscar, I might add), who sneaks aboard the doomed flight because it had been her dream to visit Italy. Or the mad bomber, who wanted his wife to have the good life, so he takes out an insurance policy right before the flight and boards with a briefcase set to explode over the Atlantic. And the bomber’s wife (Maureen Stapleton), who overacts more than anybody, gulping and sobbing about her poor husband.

And yes, the plane is full of stock characters–a priest, a few nuns, a complaining asshole, a know-it-all kid (who we know is a smartass because he wears glasses), and assorted whores, athletes, and drunks. Perhaps I was taken by the pre-security days of air travel, where a woman could say her son dropped his wallet and walk right onto a plane without being stopped. Or when a sweaty, wide-eyed man could shuffle aboard holding a briefcase tightly against his chest without having to check the bag or submit to a search. A time when the greatest threat to airport security was a woman trying to get out of paying custom duties on jewelry and furs. An era when shrimp cocktail was served as an appetizer and passengers smoked (as did the pilots). And dig those split-screen effects and mile-a-minute sexual innuendos. Ah yes, what a time indeed.

So while the sequels had their charms (no one has ever been more sexist and macho than Chuck Heston in Airport 1975), it is best to seek out the original. To watch a film play it straight without a wink or an apology is to watch a brief moment in film history that has passed us by. No one can pull off this kind of soap opera anymore, and it seems that no one is willing to try. What we get instead are limp parodies, satires, and smug “period” films like Far From Heaven (a good film, but extremely self-aware). Airport is grand, old-fashioned entertainment in the style of all 1970s disaster films, and it can never work in quite that way again. That, I’m afraid, is our loss.