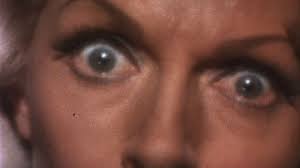 Eventually, if a man lives long enough, he will bear witness to great tragedy. The death of one?s parents, terminal cancer, poverty, or, worst of all, the sight of Lana Turner, a hair shy of fifty, tripping the fuck out on LSD. Better yet if the acid is supplied by an Oscar winner. Sure, it was only George Chakiris, and his little golden man came as a result of the one movie musical that tried to pass off Natalie Wood as a Puerto Rican, but the gravitas remained. Not so with Lana. For years one of Hollywood?s sexiest starlets, and one of the few sentient creatures for whom one could plausibly be convinced to kill, Turner was, in the sad summer of 1969, reduced to a raving loon pushed to the brink of suicide by the era?s drug of choice. Instead of spending her final days as a screen icon with magnificence intact, she decided, many years before she sold off what remained of her soul to the producers of The Love Boat, to grimace, groan, sweat, and pant in service of the decade?s most ridiculous screenplay. Long dead, I still hated her for it. I wept, as if over the grave of a beloved grandmother. She was gorgeous, alluring, maniacal, and larger than life, and now she was just another bug-eyed buffoon trying to keep the creditors at bay. At least Grace Kelly chose idleness over indignity.

But it had to happen. As no one gets out of life alive, no great star ever escapes the humiliation of strutting and striving beyond his or her expiration date. For every James Dean or John Cazale, two master thespians who had the good sense to expire well in advance of the inevitable TV movie or bloated comeback tour, there is a Joan Crawford flirting with a caveman, a Marlon Brando playing pattycake with a midget, or a Gene Kelly roller skating with Olivia Newton-John. Or, most shockingly, a Lana Turner hallucinating during a thunderstorm while visions of the devil dance before her bloodshot eyes. With The Big Cube ? stoner-speak for losing one?s shit via the soaked sugar cube ? Turner went from amoral seductress to moral guardian, offering a cautionary tale for the kids, seemingly as penance for actively destroying more marriages than her own. Maybe it was the standard, garden variety guilt. I mean, we all know she was the real killer of Johnny Stompanato, using her maternal charm to send a 14-year-old before the press as an avenging angel in order to salvage what remained of her career. Taking the rap herself, we?d have been denied Imitation of Life, and that just wasn?t going to happen. And for that great sacrifice by Miss Crane ? for that innocence lost ? we?d have to endure the hippie update of Reefer Madness. 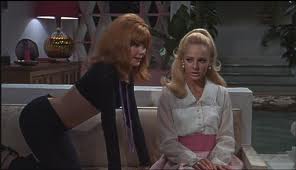 Lana is Adriana Roman, a shining light of the theater now in retirement, having traded the applause for a quickie marriage to the world?s richest man. Her husband, Charles Winthrop (Dan O?Herlihy), is a loving, generous sort, only he has a daughter, Lisa, who hates the hell out of her new mom. And, in a turn never explained, she has a thick Swedish accent, which makes perfect sense if your dad is an Irishman. No matter, for Lisa, as played by Karin Mossberg, is an uptight, unreasonable bitch, and it?s only a matter of time before she?s seduced by a playboy with eyes on the Winthrop fortune. That man is Johnny Allen (Chakiris), a medical student/stud who is bored with becoming a doctor, so he spends all his time at the school?s lab making LSD for his friends and neighbors. No one seems to care about his hobby until some of his stash leads to the death of David, described as a ?beach boy,? if not an actual Beach Boy. David unknowingly gulps down acid with his beer, which leads to a freak-out scene of such hysteria that it surprises no one when he runs outside, only to get hit by a car. Johnny?s professors are not amused, and they quickly expel him from the university. Untethered, Johnny then sets his sights on the sweet, stupid Lisa.

First, there must be a party. A happening, man, where gay men strip, orgies are declared, and the resident whore, Bibi, dances about in her bra and panties as if paid by the gyration. ?I don?t know about you, baby,? Johnny declares, ?But I?m ready to fly!? Right about the time Bibi takes off her top, however, Charles and Adriana return home. Dad, needless to say, is outraged. Johnny is never to see his daughter again, and would that pretentious young artist please take back that hideous mermaid painting that dad inexplicably paid $600 for? There?s a fight, a slap, and heated, unforgivable words exchanged. But Lisa can?t run away with Johnny now, because he knows the little girl would be cut off. And without the money, she?s just some moron with an accent. No, he?ll bide his time. Surely the gods will intervene, such as when Charles is lost at sea after an impromptu yacht excursion that leaves Adriana battered, but alive. Surely now the two youngsters can get hitched, right? What could ever hope to stop them? Oh yeah, the will. Dad?s will. And it?s packed with unfortunate stipulations. 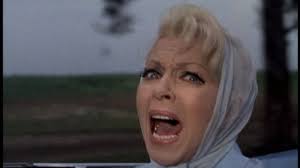 Sure, Lisa will get $1 million when she reaches the age of twenty-five, and $1,000 a month for expenses, but Adriana retains the power over life and death. She can, at her discretion, void any future husband for Lisa. If the girl insists, her entire inheritance is lost. Now, Lisa is more than willing to marry for love, but Johnny is not so sentimental. Having just thrown away his medical career for a tub of acid, he?s a little short on cash (and prospects), so he immediately starts planting seeds of doubt in little Lisa?s pea brain. ?Adriana killed your father,? he reasons, as if the broad brought about that hurricane all by her lonesome. ?There are ways of dealing with cats like that,? he offers, and she?s more than receptive to the cause. Let?s give the bitch LSD! She?s still grieving over Charles? death and in physical pain herself, so why not replace her pills with acid? She?ll go crazy, jump out a window, and we?ll have the cash all to ourselves! It?s a brilliant plan, but only if you haven?t seen a single movie from the 1940s. Hell, Lana herself starred in half of them. Operation Hallucination is on, and Johnny is no fool. What he wants, he gets.

After Adriana ingests enough acid to silence the entire Haight-Ashbury district, she starts hearing voices. The gas is on! You killed my father! You are going to die! She stumbles about the room. There are kaleidoscopes, melting faces, skulls, and bad music for all. But this is only the opening salvo. Sure, we could kill her outright, but why not drive her insane? Get her declared a cuckoo bird, then secure power of attorney, thereby voiding dad?s will. Seems reasonable, but the plan goes back to murder in an instant, as Johnny and Lisa take Adriana up to a cliff and try to push her into the sea. Somehow, she gets away, and is, against all logic, driven home by the same people who just tried to kill her. So let?s do this up right, and for the final time. In an evening made whole by the worst thunderstorm in a generation, Adriana has an acid trip for the ages. The devil appears, the ocean becomes the sky, the phone rings incessantly, and Die! Die! trips off the tongue like a term of endearment. ?We must destroy the evil in you,? the kids cluck, topping it off with a push for suicide. ?The window! Jump, Adriana. Jump!? 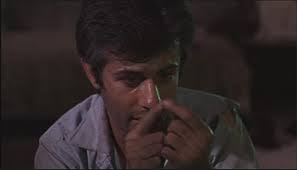 Adriana is finished as a sane woman. In a case seemingly brought to trial the next day, the will is nullified, and Lisa takes full control of the estate. She and Johnny are married on the way out the door. The wedding, such as it is, is more sex romp than ritual, and within minutes, people are tearing off their clothes and jumping into the pool. A few motorcycles show up just for the hell of it. And before the marriage license is even dry, Johnny is taking off Bibi?s bra and carrying her?away to the bedroom. Yes, I said Bibi. ?Don?t tell me how to live,? Johnny roars, and a disgusted Lisa threatens to call the police and confess everything. So Johnny counters. He?ll agree to a divorce if she gives him $100,000. Divorce? After 26 minutes of marriage? Such is the era of Woodstock. Or, as Johnny reasons, ?I belong to the now generation.? What on earth does Lisa do now? Simple. She?ll ask Frederick, a playwright and Adriana?s good friend, to write a play in a few hours? time that will act as therapy and pull Adriana back to sanity. You damn right it can work.

So Adriana thinks she?s in a play, but in actuality, she?s re-living her husband?s death and own forced acid trips. If she can face her fears and a stepdaughter who wanted her dead, she can fight off the madness and take back the estate. Sure, it?s a denouement not even a soap opera would attempt, but this is 1969. If 600,000 unwashed hippies can tune in, drop out, and not stop a war, what can?t we do? The play ? written and staged over a weekend and called, appropriately, Cry Murder ? plays to a packed house, and as Adriana forgets a line, Lisa rushes the stage and confesses her deed. The crowd is shocked, and Lisa is slapped for her trouble. Somehow, the ruse works. Adriana has beaten drugs, mental illness, and a complete emotional breakdown. She leaves the theater a star once again, with a waiting limo to boot. Lisa loves her new mother, dammit all, and will not be arrested for attempted murder. But what of Johnny? Taking too much acid, he is reduced to a shirtless mess, talking to ants and crawling on the floor inhaling the sweet sugar. His reflected image, that of a skeleton. Not even the rats will be sticking around for this one. 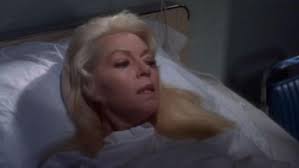 While The Big Cube argues most convincingly against killing your stepmother for money or shacking up with a man sporting a pompadour, its most lasting legacy, aside from taking Lana Turner off my list of masturbatory fantasies, is to forever tarnish the 1960s as an era of lasting import. Sure, several important folks were shot, and we landed on the moon, but it remains the most overrated of decades, both artistically and culturally. People still believed, even in 1969, that change was possible, and through whatever means ? protest, poetry, drugs ? the world could be revolutionized in the name of decency. It took the bleak, unforgiving 1970s to set things right once again, and the subsequent nihilism let loose a creative burst that has never been equaled, before or since. As art is at its best in times of woe, society itself is most alive when we have nothing to live for. In some respects, The Big Cube was the last of the great acid-soaked enterprises aimed at a larger social movement. Hippies, flower children, the drug scene ? all was, in the end, little more than a giant bore. Sure, we were no less self-indulgent as the Dead yielded to disco, but we had traded the self-righteousness for a death wish, an infinitely more attractive element of the young and dumb. Give me conformity over the empty reaction, any damn day.