So, dear readers, it has finally come to this. The reality show genre, which up until now has been merely obnoxious and crude, has now passed into a world where even UPN fears to tread. The glorious, Rupert Murdoch-owned Fox Network (let us never forget this fact), has now given us a dating show — or, to be more specific, a show with marriage as its stated goal — for midgets. Those who haven’t spent hours drafting plans for Little People Labor Camps or who don’t believe that Under the Rainbow is the most offensive stain on humanity, surpassing even Stalin’s show trials and the Holocaust combined, might argue that Weebles Need Love Too, but if it were only that easy. Does anyone, even the most romantic and idealistic sot in the viewing audience, actually believe that The Littlest Groom is about the triumph of love? That executives at Fox saw that America was quickly tiring of chiseled hunks and gorgeous babes with big knockers and that the much-neglected dwarf market needed a bit o’ tappin’? No, shocking as it might seem, this is nothing more than the most egregious example yet of shock, exploitation, and humiliation passing as an evening’s entertainment. And for once I’m against it.

While I have not recovered my humanity and remain unwilling to grant Constitutional protection to the munchkin class, I object to The Littlest Groom because it made me feel unclean. Literally covered with filth. Not offended necessarily, as I have advocated in the past for a nationwide resurrection of midget-tossing, but disgusted and appalled by the sheer hypocrisy of the event. Fox would have us believe that this is just a pint-size version of The Bachelor, when this is nothing more than a gutter network’s attempt to throw even more red meat at its target demographic — Southern trash and middle-American lunkheads who want to laugh at little people so that they might feel superior for once in their lives. Fox wants their endless parade of sausage fingers, exaggerated torsos, and raptor-like arms to act as a circus of horrors for an audience that seems willing to accept whatever swill they are given, so long as they don’t have to think about it too deeply. Things were just fine when I was roaring with delight over the plight of the midget, but I’ll be damned if Ill stand by and let trailer-dwelling in-breeders join the party. 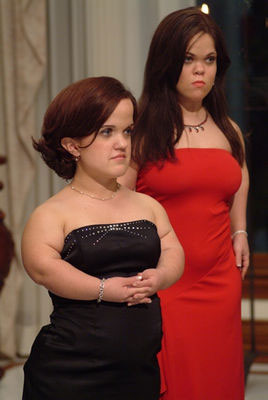 The show centers around 23-year-old Glen Foster, a wee-man from Philadelphia who considers himself quite the ladies’ man. Still, he finds it necessary to reassure us that he’s “not a player.” That’s just as well, for I wouldn’t want to know that a half-human got more ass than I did at that age. He is forced to choose from twelve midget females, paring them down to five by the end of the evening. As a group they go golfing and line-dancing, which seems overly cruel given the limitations of both activities. Hell, why not stage a basketball game or an impromptu high jump? Once again, Fox is nudging the ribs of the redneck dolts who themselves can’t escape the ever-deepening indentations in their crumb-filled couches. Ain’t they funny? They’re barely bigger than their clubs! Whatever Jethro.

But as the show nears its conclusion (it is the first of two parts, which makes it the shortest reality show on record), it throws in the predictable twist — Glen must now deal with three normal-sized women along with the remaining midgets. The horrific crassness of this turn of events is obvious, but deserves a deeper look. First, we know that these women — centerfold material by any standard — would never date someone like Glen unless he was a billionaire or owned a movie studio. They are wannabe actresses who are willing to cuddle a dwarf (eeewwww, they are no doubt uttering to their insistent agents) because it might mean future gigs or at least a few nights away from chugging old, musty, CEO-cock. And Glen must know that he could never choose one of the hotties, as any opportunity for love would end once the cameras stop rolling. So why bring these women aboard? Why to mock and deride our tiny hero, my dear readers! We’ll watch the long-legged beauties caress his puffy chest in the hot tub and plant kisses on his massive forehead, all in the hopes that the poor sap will fall for a hot chick and get his heart stomped on like a good little boy. First you give these small women one of the few opportunities to meet a fellow freak, then you strip away what remains of their self-esteem by making them compete with attractive, normal-sized women? Perhaps now would be a good time for that shower. 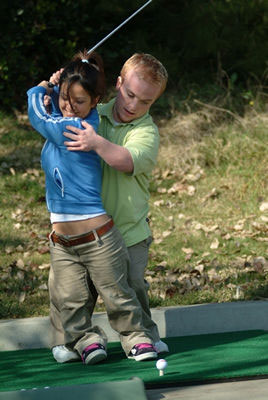 Believe me, I am confused by my feelings this time around, as it seemed like the opportunity of a lifetime to watch and critique a reality show featuring midgets. I mean, outside of a dating game for those with Down’s Syndrome, what could be better? But I simply couldn’t take it. No, I don’t feel all warm and fuzzy for these folks and no, I’m not losing my hateful edge, but the crush of bad television and low-brow culture has reached the point of no return. Unlike the conservative moralists who blame the purveyors of such trash and call for censorship, I blame the consumers who continue to tune in like the mind-raped savages that they are. And of course, I say keep it coming rather than have any external agency step in to stop the flow. After all, I am a free speech absolutist and as I’ve said before, I would applaud the courage of any network who televised the fire bombing of a nursing home or the machine gunning of a room full of nuns conducting silent prayer. But for this long, painful hour, I felt nothing but dismay and yes, even a little nausea. For if I must have midgets marching before me, I’d rather they inhabit a familiar context — Barnum & Bailey, Fantasy Island, or a David Lynch production. But please, no love stories. I’m not that strong.