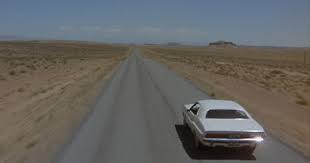 By 1971, wed pretty much had it. The grand experiment was over. Not even our wars made sense. Free love gave us the clap, hippies traded dancing for mass murder, and everyone worth assassinating had long since passed us by. It was a time of transition. Grand gestures gave way to simpler pleasures, with the expected turn inward. Rather than change the unchangeable, we gave up on the idea altogether. Thered be reasons, of course  explanations  but we werent about to grant them a foothold. Not this time. We believed, once, but whered that get us? So as a new decade dawned, and the collective American mood darkened to near invisibility, the cinema followed suit, trading narrative sense and closure for the abstract and inexplicable. Characters would have nowhere to go, and as much time as necessary to get there. Which brings us to Vanishing Point. Not only is it arguably the most pointless (point-free?) movie ever made, its very inability to justify itself remains its best defense. A man has a car. He wants to drive from Denver to San Francisco in less than a day. No money, no fame, no lasting reward. Just because, thank you very much. If its enough for a life, you can bet its enough for a movie. Argue against it at your peril.

Hes known only as Kowalski, as if he dropped his first name around the same time he swore off the restriction of a haircut. His bushy mane, unshaven face, and steely gaze recall a legendary figure from the Old West, only hes not about to get anywhere near a horse. His mode of travel, needless to say, is the 1970 Dodge Challenger R/T. Cocaine white, if youre curious. If its not the coolest vehicle ever featured on screen, it sure as hell is the most representative. Maybe not of the man (hes but a stranger), but certainly the era. Its a car no more suited to the ordinary than a tank for a cruise down Main Street. As much as no man has ever used such a prized piece of machinery for a mere commute, or picking up the weeks groceries, its doubtful it has ever even flirted with the right side of the law. Its a car for fleeing a scene, escaping a rap, or taking whatever piece of America you can stuff into the trunk and dumping it, sans witnesses. It reeks of sex, crime, abuse, and futility, and somethings gone wrong if it escapes unharmed. Do what you gotta do, then bury it. Even better if you can reduce it to flame and ash. Its the only automobile imaginable that could witness a copulation, conception, and termination during the same sticky summer. 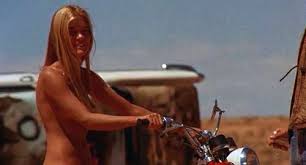 Of course, there will be those who try and categorize Vanishing Point as the ultimate defense of freedom for its own sake; a bold strike in the direction of playing by a new set of rules. Bullshit, then and now. Sure, its not playing fair, nor is it adhering to the tried and true, but theres no more a goal to the movie than there is an attempt to elevate Kowalski to the status of anti-hero. We get precious little by way of characterization  hes a former cop who saw action in Vietnam  and while such facts hint at the sort of man who turned his back on the establishment, its more to the point that he ran away from the rebellion with equal fervor. As such, he hits the road not to find himself, or the real America, or any such related silliness that infected Easy Rider and its dozens of inferior clones, but rather to escape the mere fact of living. His last, final act, that of driving the distance between two points, is but a brief pause before oblivion. Lacking any real commentary on the country of his birth, the film instead posits the radical notion that the cause itself  any cause, for that matter  is but a distraction from lifes ultimate meaninglessness. Belief, above all, as a denial of death. Speeding across a desert, then, takes on as much (or as little) significance as a mass protest. Only the former cuts through the crap with more alacrity.

As Kowalski pushes his Challenger through the mountains of Colorado and Utah, as well as the desert of Nevada, he is helped along  urged, to be more accurate  by Super Soul, a blind disc jockey who inhabits an improbably located radio station in the middle of nowhere. From all appearances, the town is old, white, and conservative, yet Super Soul roars his invective with all the passion of a man in the full flower of acceptance. More than music, though, Mr. Soul is about information, and thanks to having access to law enforcements frequencies, he is able to pass along the location of assorted cop cars and road blocks. But Soul, the poor sap, believes the hype. Kowalski is, in his mind, the last American hero. A soul hero in a soul mobile; a four-wheeled flight from injustice and a murderous Man. Super Soul remains a pocket of resistance that failed to get the memo; a dying ember from a decade of conflagration that simply refuses to breathe its last. Its telling that throughout the long broadcast, Kowalski is either annoyed or indifferent. Super Souls audience of one is rapidly in danger of disappearing altogether. Even the medias interest in this mysterious creature of the road is more death watch than a full accounting. The story, after all, has but one ending. 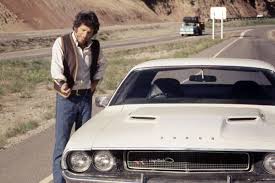 And so Kowalski drives. Cops plea for a pull-over, but hed rather run them off the road. Racing challenges are declared, all ending in dust and despair. Flashbacks interrupt the flow, but they too reek of pain and charred remains. He was a racing enthusiast, bikes and cars alike, but all ended badly. No heroics, just twisted metal. A job on the thin blue line, but the bastards just abused the badge. Girls stripped to the waist, forcing his disillusionment. There was love, but we all know how the story ends, swallowed whole by an unforgiving ocean. All help piece together a life at the end of the line, but even then, the picture is incomplete. He meets an old prospector who trades snakes for sustenance, but the relationship is more mirage than lasting connection. Just more stranded souls on the march to nowhere. Contradictions abound. Angry whites attack Souls station, killing the dream at last. It was all for naught. Even the gays have gone crazy. The only two we see are con men hell bent on gun violence. Stonewall exposed as a lie. Whatever it all meant, it means nothing now. Free the vipers, cries the desert man of God, bringing forth a new mantra for the age. We laugh so we dont cry. We drive so we dont surrender.

But surrender is the new clarion call. Not even sex is an escape. After encountering a fellow traveler and speed freak, Kowalski returns to the mans hovel, only to be propositioned by the most glorious sight imaginable: a naked chick on a motorcycle. He senses familiarity, and yes, shes the near-rape he helped stop long ago. Though reliably mute on the matter, he might well ask why he risked his career to stop exploitation, only to watch the same young woman cheerfully submit to the very same at a later date. Maybe its the final straw. A last, best piece of evidence regarding escapes ultimate impossibility. Starting over requires a level of unconsciousness few can muster. The past is always with us, and if we can block it out, we might not like what weve become.  Kowalskis destination, then, is as tortured as the starting line. So he bends to the only real choice left a man: the time and manner of ones departure. Its the last meaningful power we retain, just as the only insurrection worth a damn has us declaring that weve had enough. That, ultimately, is the vanishing point we all fear, yet secretly covet. The fight now over, we can disappear into the ether, indistinguishable from our surroundings. Untouchable at last. In the words of Super Soul, You cannot beat the desertNobody can.