THE FREAK KINGDOM’S THANK YOU LETTER 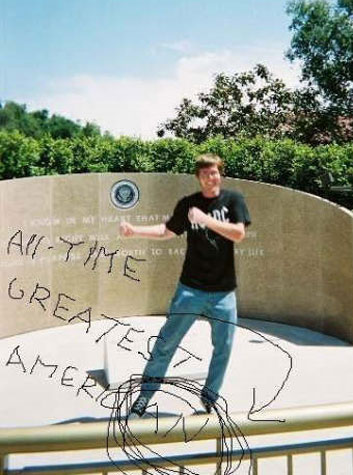 The Freak Kingdom Answers His Critics

Thanks and congratulations. Seriously, way to fucking go.

This began several months ago as a dumb prank known only amongst myself and my close friends; a senseless and ugly but symbolic act of disgust and angst against the legacy of one of the worst human beings to ever taint the world with its presence; Ronald Reagan. An act against all the terrible shit that decrepit fucker did in office and his prominent role in bringing out and promoting everything wrong and shameful about America today. Thanks to you, my once quiet and little-known desecration was, at least for a day, provided with a national stage.

And all because of you, people around the world who despised Reagan, whether it be for illegally selling weapons to terrorists in Iran to illegally fund terrorists in Nicaragua; for funding and supporting murdering right-wing dictators in the overthrow of democracies in Central and Southern America because of their leftist leanings; for salting the earth of numerous economies by forcing ill-advised reforms on third-world nations so that American multinationals could have more markets and another source of cheap labor; for needlessly sinking hundreds of billions of dollars in the arms race against an impotent and imagined Soviet threat while millions of his countrymen starved; for turning his back on the burgeoning AIDS epidemic; for making a fiscal insanity defined by massive deficits and crippling debts a valid economic platform — policies so ill-conceived that even bright children and philosophy majors would doubt their viability; for deceiving hundreds of millions of Americans with the truly offensive concept of the “trickle-down effect;” for mangling the economy so definitively that economists had to create a new terms to describe its inefficiency; for prostituting meaningless tax cuts to the poor for their votes; for making intellectualism something to be ashamed of; for starting a pointless, un-winnable and enormously expensive “war on drugs;” for paving the way for 12 years of Bush administrations; or even for just making some of the shittiest movies in cinematic history; those people can now take some solace in the knowledge that criminal monster didn’t get away entirely.

His legacy has been whitewashed, but, because of you, the world now knows that some asshole kid managed to sully it just a little bit.

You and your ilk can call me a “moron” and a “punk” and whatever else you please, and I’ll cop to most of it. Dancing on a man’s grave is dirty, vile, mean, cowardly, dumb, stupid, hateful, soulless, anti-intellectual, rotten and foul. But so was Reagan. All that and more and worse. The punishment fits the crime, at least in spirit and, truthfully, the crooked fucker got off light.

So, kudos again for turning a private and justified expression of disdain into a national story; that’s something I could never have hoped to accomplish by myself.

Just another freak in The Freak Kingdom