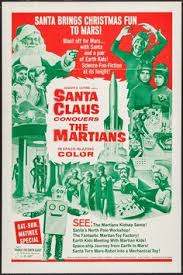 There’s something you should know about me: I love bad movies. I spend an obscene amount of time seeking out the very worst that cinema has to offer (shout-out to SyFy!) and I subject myself to countless hours of bad dialog and terrible special effects for fun! Few things make me laugh harder than truly awful movies, although occasionally they make me sad because no matter how terrible a movie is, some hacky writer still cashed a paycheck for his work. 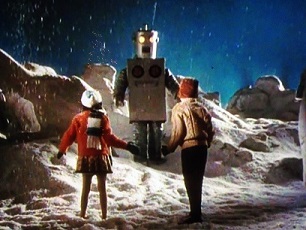 As a new Ruthless contributor, I wanted to get in on the Christmas Movie Review fun. What better way to ingratiate myself to you, Dear Reader, than by taking one for the team and watching what is arguably the WORST CHRISTMAS MOVIE EVER MADE? I’m talking about next-level bad. The kind of movie that, if the script happened to land on a SyFy executive’s desk, they’d think, “Holy shit, this makes Sharknado look like Citizen Kane.” Without further ado, I present to you the very campy, utterly ridiculous, and mind-numbingly awful Santa Claus Conquers the Martians.

I stumbled upon this heaping pile of garbage by googling, “Worst holiday movies ever,” and props to Netflix for actually having it available so that I could torture myself for 81 excruciating minutes. Made in 1964, SCCtM was directed by Nicholas Webster, who is perhaps best known for directing the iconic 1977 Bigfoot episode of “In Search Of…”. The majority of the movie’s actors were only known for this train wreck of a Christmas movie, which is the most depressing thing I can think of. But not all the actors are no-names. Feast your eyes on 10-year-old Martian girl and 80s queen PIA ZADORA! 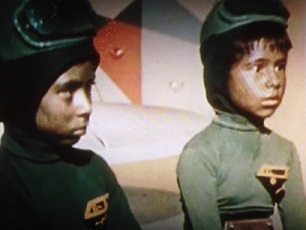 The young Pia Zadora (right), in what would prove to be the first of several poor career choices.

SCCtM is a bizarre cocktail of American excitement about the Space Program, a warning against watching too much television, and loving Santa. You know, just your typical heartwarming holiday story. Netflix’s plot synopsis reads, “The Martians are irked that their children spend so much time watching TV shows from Earth about Santa Claus, so they decide to capture Mr. Claus.” Now I don’t know much about the effects of drug use, but sweet lord, how many drugs must one take to come up with this storyline? The answer, of course, is ALL OF THEM. You must take all of the drugs to dream this up.

The story opens with Martian children Bomar and Girmar (the “John” and “Jane” of Martian names) watching KID-TV, which I suppose would have been like the “Nick News” of the 1960s. I have to say – for a planet that is, on average, 225 million kilometers away from Earth, Martians get incredible satellite reception! It must be all that advanced alien technology I’ve heard so much about. Bomar and Girmar are watching a live report from the North Pole in which previously-camera-shy Santa Claus is giving an interview about how busy his elves have been in preparing for Christmas. Santa, played by John Call – who may or may not have been drunk for the duration of the film – seems pretty excited about riding his non-rocket-powered sleigh (that was just a rumor!) around the globe and is confident that his reindeer, “Prancer, Dancer, Donder, Blitzen, Vixen, and NIXON,” will get the job done with the usual ease. 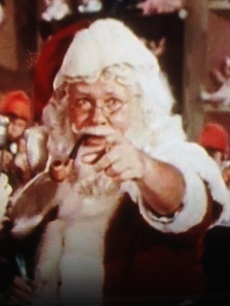 Santa wants YOU to learn more about the Space Program!

Bomar and Girmar are intrigued by Santa, but their cold alien hearts and computer brains prevent them from feeling the excitement that one might experience here on Earth. Their father, Kimar, is fed up with the amount of time his joyless children spend in front of the TV – just like Earth dads! – and for reasons that aren’t fully explained, he seeks parenting advice from the Martian elder, Chochem. 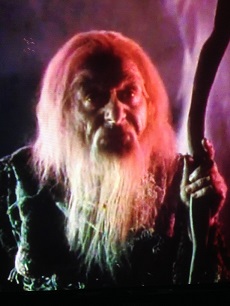 Chochem, the Martian love child of Gandalf and Gollum.

Chochem is a pretty smart guy, and he feels bad that Martian kids are just tiny adults with genius brains who lack the capacity to feel emotions of any kind. So naturally, he thinks that the best way to let the kids be kids is to KIDNAP SANTA. No, he didn’t mention anything about how Martian parents should lighten up and stop acting like insensitive assholes who are raising their children to also be insensitive assholes. Why would you think that? That would be crazy. Trust me: kidnapping Santa is clearly the only way to make things right. And with that, Kimar and his crew set off on their Earth-bound adventure to break intergalactic kidnapping laws. Did I mention that someone got paid to write this script? 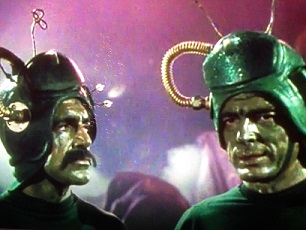 The plan is hatched, and holy shit look at that Martian mustache!

As they approach Earth, Kimar and his pals, Voldar and Dropo, are pretty disgusted by the primitive nature of humans. We live above ground (vomit) and are pretty stupid, by Martian standards. Meanwhile, these space dummies are flying around in a cardboard ship and casually pressing buttons and pulling levers to make it look like they’re really doing something. I know this movie came out nearly 50 years ago, but the effects are so dreadful that it made me long for the technological advancements that one might find in, oh I don’t know, the original Godzilla.

Flying a giant cardboard spaceship into Earth’s atmosphere isn’t without risks, however, and before you know it, the U.S. military has spotted the ship on their radar. Then for some reason we cut to scenes of military men IN ACTION – running around, examining the readings from wall-sized computers, and scrambling military planes. When the UFO was first spotted, Americans immediately assumed that the mean old Soviet Union was up to no good. One almost suspects that SCCtM was supposed to be a subtle reminder that the Cold War was, in fact, in full swing.

As the Martians gaze down on the grossness of Earth, they are surprised to see not one, not two, not three, but dozens of Santas. What luck! Surely Earth wouldn’t miss one measly Santa when the planet is literally covered in them. J/K, those are all Salvation Army Santas. Way to go, idiot Martians! Nevertheless, they land the ship in a park, where they stumble across two “nincompoop” Earth children, Billy and Betty. 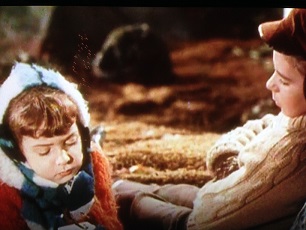 Betty and Billy’s parents punished them by forcing them to appear in this film.

Here’s just a sample of the amazing dialog from this steaming pile of a movie.

Oh ok, Mars Dad. I won’t be afraid of you or your mustachioed friend who just called me a nincompoop. The Martians explain their dilemma to Billy and Betty – they’re just looking for any Santa to call their own. But Billy, who is obnoxiously helpful, tells them that there is only one real Santa, and he’s in the North Pole. Rather than just thank Billy for being such a great Boy Scout, the Martians decide to kidnap the children as well, thereby breaking the number one rule of life: never break two laws at the same time.

Then the movie cuts to some more cool shots of the military. A plane is refueled mid-flight. Airmen run aimlessly out of hangars. Men are still sitting in front of giant computers. There are at least 5 US Air Force recruiting videos tucked neatly into SCCtM, featuring snippets of the Air Force anthem. By the end of the movie, I was nearly ready to enlist.

Billy and Betty are taken to the North Pole so that they can be both kidnapping victims and witnesses to another crime. The Martians send their giant robot into Santa’s workshop to grab the “fat little man in a red suit,” but Santa utilizes some of his magic powers to convince the robot that he’s nothing more than a big, harmless toy. Still, the Martians are pretty intent on taking Santa back to Mars, and drunk jolly old St. Nick seems pretty cool with the idea of being kidnapped because he’s always wanted to see Mars. Billy and Betty are pretty annoyed by the whole mess, though. 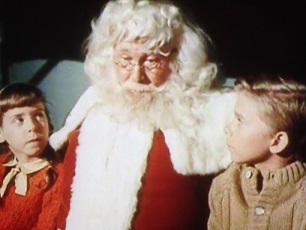 Santa explains the bright-side of kidnapping to Betty and Billy.

Billy is so annoyed, in fact, that he manages to disable the spaceship’s cloaking device by unplugging a wire or two so that the military can find them. Cut again to the Air Force doing Air Force-y things, which don’t include finding the spaceship. Scramble all the jets you want, USAF. None of them can fly to Mars. At this point, Mustache Martian Voldar has had it. He was never down with the kidnapping plan in the first place, you see; but rather than returning everyone to Earth, he spends the second half of the movie actively trying to kill Santa and these two little kids. Thankfully, between Billy’s know-it-all-ness and Santa’s tipsy logic, everyone lands safely on Mars. Unfortunately, they’re all immediately put to work building toys for Martian children whom we already know will neither appreciate nor enjoy playing with them.

While everyone is busy in the new workshop, Voldar reveals his diabolical end-game: he knows he can’t kill Santa, but he CAN discredit him! Voldar, you dick. It takes a pretty cruel mind to try to ruin the reputation of a mythical fat man who breaks into millions of homes, has a bottomless pit of a stomach, and sometimes leaves coal and switches in children’s stockings. Santa is unfazed by Voldar’s attempts to sully his good name, however, and it leads to a battle of epic proportions that involves hurling toys at evil Martians in order to defeat them. If you’ve seen the movie Toys, congratulations. You know how SCCtM ends. Santa also convinces the aforementioned and ridiculously named Dropo to become Mars’s Santa, once he gets a little fatter. And with that, Santa Claus conquered a couple of Martians, and also convinced Kimar to be less of an asshole dad and let his kids have fun every once in a while. And isn’t that what Christmas is all about? 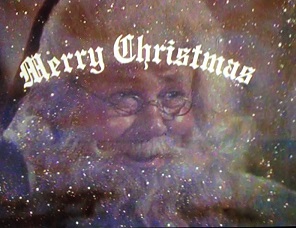