Its the stuff dreams are made of. A battle royale. A legendary affair. Two men, both long-suffering Hollywood titans, squaring off at last before settling in for eternity. In one corner, theres old Frank, murderer of women and children alike; a blue-eyed devil of the most sinister vintage, who knows that a man scares a lot easier when hes dying. In the other, Noah Cross, a father to a daughter who becomes a lover, producing a granddaughter thats, well, you know the story. And dont get him started on his plans for the future. Evil incarnate, head to head at last. Henry Fonda and John Huston. Men, for chrissakes, when we still had the will to produce them. Imagine, then, my disappointment when, after a good ninety minutes of suffering, neither man inhabited the same frame as the other. Sure, they shared a phone call, but I know how that shit works in the editing room. Were they ever on the same set? The same continent? Would they really get top billing, only to defer to Shelley Winters in the worlds biggest sombrero? I had to see it coming. When were talking about two of the greatest personalities ever to grace the silver screen, it helps not to also be talking about a bloodthirsty octopus. There would be no showdown in the streets. Only a world-class drunk turning down a Bloody Mary and Tom Joad with pants pulled up to his nipples.

I believe it was Noah Cross who once said: You see, Mr. Gittes, most people never have to face the fact that at the right time, the right place, theyre capable of anything. In one context, killing a rival to build an empire. In another, accepting hard currency for spitting out lines like, Ive read that the suckers on a tentacle are like the claws on a tiger. Sure, Huston could read the phone book and have us all signed up for the cause, but as Gittes himself retorted, how much better can a man eat? How much is enough? A fighter, a brawler, a notorious womanizer, and now this? At least he didnt get down in the muck and wrestle the damn thing like he was channeling Bela Lugosi or something. Still, this is Tentacles. An Italian-made nightmare that asks us to believe that sound frequencies, pushed beyond their legal limit so Henry Fonda can build an underwater tunnel (off the coast of California, no less), have so driven an octopus mad that it cant help but swallow boats and swimmers alike. Curiously, only the octopus has lost its mind, while the sharks, whales, and dolphins seem to be better than ever. Fine, some fish are dead, but Fondas crime only extends to this single beast. So why, really, should anyone be upset? Odds are its an important tunnel, and its not like a great many people are affected. One good thing about a death at sea is that its the easiest to avoid. Life is full of assorted perils, but if you stay out of the water, youre golden. You can even wave at the octopus from the sand.

As bad as it became, it started off with an undeniable bang. I mean, how many films would ever dare begin with a baby being stolen from its carriage and swallowed whole before its screaming mother? Its never explained how the octopus reached up a good 20-25 feet to steal the infant, who was safely on the beach, but we accept it nonetheless, if only because its so undoubtedly ballsy. Moments later, a peg-legged sailor is dragged into the sea. After that, a body bobs to the surface, right as two youngsters get ready to fuck in a small boat. I mean, if were going to watch three Oscar winners sell their souls, at least were going to be treated to a high body count. Then Claude Aikens shows up. Hes the sheriff, but its clear hes just keeping time. He doesnt want any sensationalism, which means youd better not wake him from his nap. Not even when the bodies display evidence of having been stripped of skin, muscle, and bone marrow. Huston (playing Ned) is the resident truth-teller, a reporter whos clearly rubbed a number of people the wrong way during his tenure. But whatever story there is to tell, we cant let it scare the community away. Its summertime, and we need the tourism. Why, theres even a big yacht race to consider. No panic, please. Thank God no ones ever thought to do this story before.

Soon, an introduction to Ms. Winters. Shes Tillie, Neds sister, though the pair flirt so shamelessly we half expect Huston to tear off the most ridiculous night shirt ever worn by the male persuasion and tap yet another familial ass. Still, its complicated. Shes been married a dozen times, and there are kids everywhere. But mama and papa would want it this way, brother and sister together again. Maybe it makes sense in Italian. But before we can settle in, we cut to Fonda, pissed as shit that his project is running off the rails. Underwater tests are attracting attention, and he wont stand for it. Again, its a tunnel, not a nuclear waste site, so we never really learn why corners are being cut. The closest well come to the truth is that when people on shore use radios or walkie-talkies, the octopus starts growling, spewing ink, and killing anyone within earshot. Divers investigate, divers die. Ned even gets to spit a great line  Behind every great fortune is a crime  but its never really tied to Fondas actions. Whats the crime, goddammit? Still, Ned continues to investigate. He makes threats on the phone, and over drinks at a seaside restaurant. It was around this time I began to deduce that they lost half the screenplay in a studio fire. Maybe the translation stripped away the nuance.

Subplots abound. Tillies sons are competing in the yacht race, which means well get a celebratory parade that consists of nothing more than an Uncle Sam emcee, four cars, and six of the ugliest cheerleaders youll ever see. Around this time, Tillie barks at one boy, Why do you think Jamie wee-wees so much? He responds by calling her fat. Five years after The Poseidon Adventure and Shelleys still defending the size of her thighs. Cut to Will Gleason. Hes a marine life expert, and he talks to killer whales like hes begging for fellatio. Can he get to the bottom of things? Will shares a tender moment with his wife, so we know shes marked for death. A sailing excursion commences, only Will has work to do. His wife, her sister, a hunk, and a tubby go instead. All die on cue. Right before being swallowed whole, the tub remarks, No one likes a fat man. Why this Italian gentleman has been dubbed into a Mexican is anyones guess, but it adds pathos. Far from home, hell die; a floating testament to overeating. Not even the boat survives. More investigations. This time, a research boat is capsized by a tidal wave. The octopus has gotten clever. Cleverer, at any rate. Just then, an observation. Whats with the musical score? Like, harpsichord overload. If its about ginning up the fear, it aint working. Tentacles feels like Tom Jones.

Boring us to tears, the movie gets serious. It will make even less sense. The yacht race, for all of its charm, is likely as inexplicable a sequence as one will find. At least in a film about a killer octopus. Tillie talks to her boys via radio, but quickly loses touch. The Coast Guard sends out a warning, consisting of a hand-drawn sign that says, Danger, Go Back. Our tax dollars at work. The Uncle Sam guy tells a joke to the capacity crowd, something about a Scotsman and his wife, and it cuts off the sound right before the punch line. Every yacht in the sea overturns. The octopus, right before our eyes, swallows one of Tillies kids. I mean, there it is! A freeze-frame. What the fuck, her kid shows up on the beach, unharmed. What about all those poor saps in the water? No closure, as expected. Then, a cut. Were back to Will Gleason, and he has a plan. The killer whales will take care of business. But first, a chat. Im asking you to kill the octopus, he whispers. Seductive, even amidst tragedy. You understand that? And so it does. But first, the boat is rocked. Ass over tits. Everybody into the water. A bit of ink before the fall. Its an octopus, yes, but we take it on faith. We only ever really see the eye and a tentacle or two. But its time for the big finale. What we waited for. A redemption of sorts. Revenge for the slander of Orca. 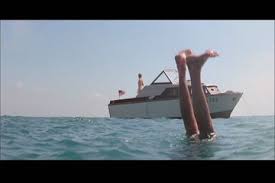 As the harpsichord gives way to a lush, sentimental score, the killer whale springs into action. Like a torpedo, it slams its head into the heart of the octopus. Again and again, like a fevered fish trying to escape a line. Tentacles are bitten, falling to the ocean floor. Limbs are severed. Its all so madcap and disorienting, it could easily be confused for a mating ritual.  More head-butting, then the great silence. Never mind that Huston and Fonda last appeared an hour before. Where to, its anyones guess. This is about a man and his whale. In a flash, a cut to two triumphant sailors atop a great ship. One bellows, the other wants to sail to Africa. A safari! Away from the dangerous sea forever. But the killer whale, thought dead in its fight to save humanity, emerges with a smile, a squeak. It appears hell be coming along. Los Angeles to the Dark Continent by yacht? It can be done. Why, with a whale to guide us, like the stars above. But what of the tunnel? Without an octopus gumming up the works, its all but a done deal. On time and under budget. Eight lives needlessly lost, but what great vision ever came without cost? A Pulitzer for Ned; that is, if we can ever find him.