The Hobbit 2: The Smaugening- Film Review

Film Review- The Hobbit 2: The Desolation of Canon 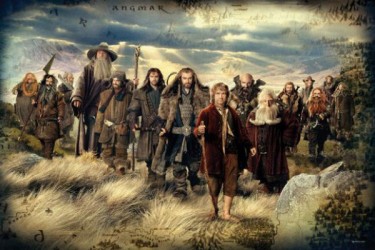 Paunchy, bearded, and old- characters not that different from the players themselves.

Fair Value of Hobbit 2: The Exploitation of Smaug: -$2.00. You can give me a discount on the downloading the game on Steam, as I’ve already seen all the cutscenes.

Can You Summarize This Film For the People Who Were Busy Stuffing You Into Lockers in High School?

Sure thing. White collar criminal Bilbo Baggins (Martin Freeman) is assisting a band of refugee mercenaries in re-installing a dictator, Theodin Oakenshield (Richard Armitage) to replace and overthrow a minority political leader known Smaug (the ubiquitous Benedict Bandersnatch) who believes in protectionism and non-globalization of the Lonely Mountain economy. And all your old friends from Lord of the Rings are back! Why there’s Gandalf the Gray (Ian McKellan)! And Legolas (Orlando Bloom)! And Sauron (Bendict Cumberbatch, AGAIN)! I’m officially at Critical Cumberbatch at this point. After  Star Trek into Darkness, The Fifth Estate, and Twelve Years a Slave, I don’t want to see him Benedicking around in another movie for at least another year. As the band treks from the Mirkwood Forest to the forges of the Lonely Mountain, they kill many an Orc in elaborate action set-pieces. 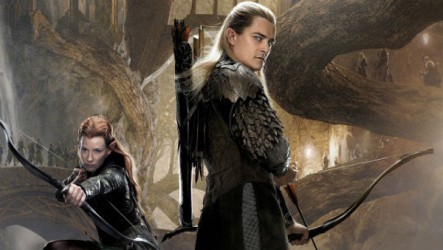 This is Legolas, the central character of The Hobbit, believed to be a author proxy representing J.R.R. Tolkien

What Hath Fandom Wrought? Dwarves surfing on lava. Armies of ork ninjas, silently prowling over the rooftops of Laketown. Hot elf on dwarf romantic action. You guys remember all of that from the book, right?

This is what happens when you let executives, who only dream about merchandising contracts, ladle on the fan service. I’m going to repeat an old theme: fandom does not actually know what’s good for them. One of the textbooks symptoms of a bad sequel is one that tries to merely repeat what you liked about the film, while jostling you sharply in the ribs to remind you of what you once enjoyed. “Hey Middle Earther, remember how cool Arwen was?- Guess what, we’ve got another badass elf warrior maid, only this time, she’s a redhead”. “Hey Tolkienities, did you ever want to know more about the political intrigues under-pinning Laketown? Well check out these 10 minutes of exposition about tariff import policies in a post-Smaug economy”. “We know you like seeing Orcs gets killed, so how about we show you one Ork getting killed for every minute of the movie?”

Fans create Fanon, or Fan Canon, sometimes also termed Head-Canon. It’s this wonderful interactive process wherein you fill in the blanks that the story-teller has left in the tale. Boba Fett goes to becoming a supreme badass, despite having almost no line of dialogue. Characters that were alluded to for a sentence suddenly get Silmarillon sized biographies, thanks to the magic of Fanon. The problem with too many franchises is that too many franchise managers confuse Fanon with exposition. And then, rather leaving oblique countours in the sequel, they devote three hours to plodding through the explanation of everything that once worked by virtue of being cryptic and mysterious. The reason that people love Tolkien is not because he wrote the Middle Earth bible- if that were the case, we’d be seeing an epic 10 movie franchise of The Silmarrillion. Instead, people love The Hobbit, and The Lord of The Rings, because they  are ski ramps to our own imagination. 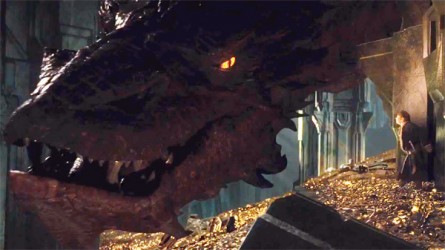 “NOW BEHOLD ME, BENEDICT CUMBERBATCH, AS I ASSUME MY TRUE FORM! (press x to skip scene)

We’re Off to Kill the Dragon, the Wonderful Dragon of Smaug: A dwarf surfing on a river of molten gold. That is the image that captures how thoroughly and awfully Americanized this film is. The Hobbit has a fundamentally British character to the story in the sense that the protagonists triumph more frequently from luck and improvisation than from Crowning Moments of Badass. In the book, Bard is the most fearsome warrior…I’m re-checking my copy of the book, but I don’t remember a sentence that read like “And then Dvallin the dwarf knocked the Orc down into the rowboat with such force that it propelled the other Orc 50 feet upwards, to be decapitated by Dvallin’s duel battleaxes.”. Maybe I just forget that bit.

Anyways, my point is that the major protagonists, Bilbo and Gandalf, get by more as a result of deceit, distraction, and timely networking with avian mega fauna  than they do from casting fireballs and making sneak attacks. The film lost it for me when we got to Legolas the elf dancing on the heads of two dwarves while shooting arrows with perfect accuracy into an army or Orcs, while going over a waterfall. That’s not excitement; that’s a drawing I made when I was a 5th grader.

There can be such a thing as Too Much Badass. And when you overdose the audience on Crowning Moments of Badass, you immunize them against caring. We don’t root for Superman as much as we root for Batman, because Superman is God, and God always wins, and we hate people who always win. If every named character in Middle Earth moves like a ninja, then why should we care? It’s the Inverse Ninja Rule- the more ninjas there are in the film, the less we care about any ninja. 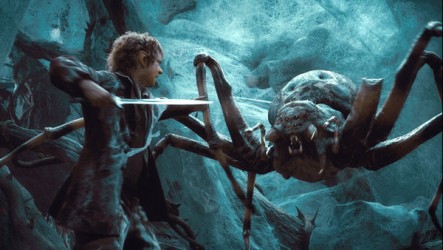 I think we’re reached an interesting junction cinematically in the past five years. The Hobbit is a specimen of action film that owes more to the visual language of video games than to the visual language of cinema. The characters bounce and volley about in accordance of some vague notion of looking cool, rather than conformity to any form of Newtonian physics. It may be a sign that the video game has become the dominant cultural expression over the waning fortunes of the Hollywood blockbuster; or it may just be a sign that the film-makers of today are spending more time playing Call of Duty than they are studying Coppola and Bergman. In any case, if I’m going to watch a bunch of Dwarves scrabbling to push levers and activate bellows, so that they can drown a dragon in a river of molten gold, then goddammnit, at least give me the dignity of being able to press the Green “A” button to release the trap.

I can respect an adaptation that disrespects the source material. But I cannot respect any adaptation that so blatantly disrespects the source material without offering either insight or humor. The Desolation of Smaug is about as soulless as a rugby jock that thinks that playing paintball automatically qualifies him as a ‘nerd’.

Fuck this, I don’t want to be a nerd anymore. I’m turning in my LARPing card. Fuck Tolkien, just let us keep the programming languages, and we’ll invent new worlds as we go along. Give me and my friends some other epithet that we can shine into a badge of honor, that you can later appropriate for yourself. We’ll hand it over to you in twenty years, then get started with a new epithet. Sound good?