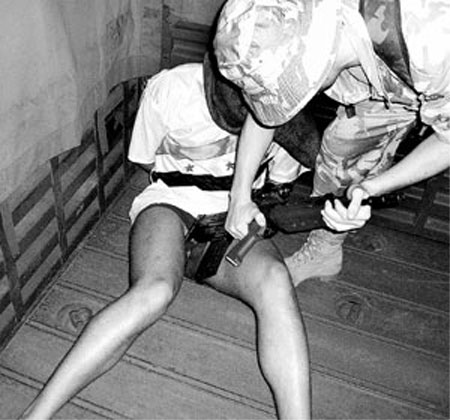 Matt Cale does the heavy lifting around here…

Of all the things that could be said about this past weeks humiliation and torture of Iraqi POWs, the most obvious has gone unstated — the undeniable homoeroticism of it all. The images do not lie: naked bodies, butt cheeks, and simulated sex, all to the cheers and grins of our servicemen and private contractors, who have now become an additional branch of our armed services. There has always been a strain of homoerotic lust in the military, from the hyperbolic misogyny, to the hazing rituals that are more suitable for underground S&M clubs. But these pictures prove beyond a doubt that most of these brave fighting men have an overwhelming desire to see men of other nations buck naked. There are many ways to inflict torture on suspected terrorists or war prisoners, but it speaks volumes that our people chose that which was most likely to result in exposed genitals. So while we assess the immediate and long term damage these tactics will have on our war on terror, let us also contemplate what has become of the Average Joe who so willingly chooses to throw on a tight-fitting uniform and kill for his country. Is it his training? His upbringing? The values of capitalism that transform all that lives and breathes into a marketable commodity? Or maybe, just maybe, those 80s Action films of our youth have literally become our reality. It is telling that our two most jingoistic Commanders in Chief have cited Rambo and Chuck Norris as their personal heroes.