SEPTEMBER 2004 COCKSUCKER OF THE MONTH 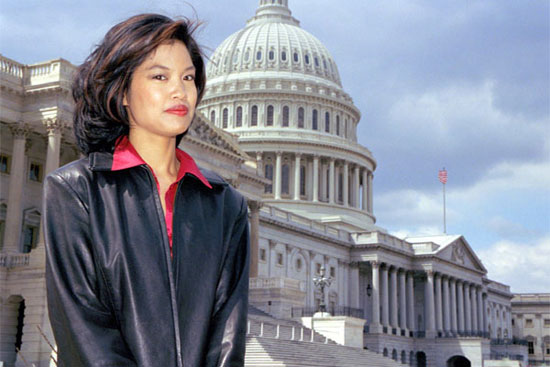 Jonny had to post this one a day early…

In a better world, this month’s Cocksucker would need no introduction. But I am afraid many of you don’t know who Michelle Malkin is. Think of her as Ann Coulter with bad table manners. While a phony-intellectual like Coulter gets her sick jollies from penning absurd hagiographies of such certified American goons as Joseph McCarthy, J. Edger Hoover, Whittaker Chambers and Richard Nixon–so successfully I might add that Governor Schwarzenegger invoked the ghost of Nixon as the reason he chose to become a republican during his speech at the RNC, an act of cynicism and hubris unthinkable just a few years ago–Malkin, while usually just sticking to innocuous pap like her Diversity Quiz, now takes on a bigger sacred cow; the internment of over 100,000 Japanese Americans during World War II. She just released a book about it, In Defense of Internment: The Case for “Racial Profiling” in World War II and the War on Terror.

I first heard about this book (I’d been remotely aware of Malkin for years. But she was always more ‘schnauzer in heat’ to Coulter’s rabid pit bull persona that had previously occupied my sexy-frigid-Republican-bitch-radar screen and masturbatory fantasies. You’re lying if you claim you’ve never jerked off to Katherine Harris) on LA’s own John and Ken Show. John and Ken for most of you who don’t know, are two viciously reactionary yet exceedingly entertaining radio personalities who do things like lead an SUV caravan to Sacramento to protest gas-guzzler taxes and clean air bills. However, they are so reactionary that unlike all other psuedo-facsist, suburban-dad mentality talking heads, they won’t readily swallow republican bullshit either. Think of them as Ruthless Reviews without all that liberal education and all those altruistic values. Truly, the angriest dogs on the radio. And those two LOVE them some racial profiling. Their thinking is as follows; since all of the 9/11 hijackers were Muslim men from Arab countries, Homeland Security (I still shudder at the deeply fucked up Orwellian undertones of that phrase) should only concern itself with those people. While you may disagree with their beliefs 100%, it is priceless to hear the utter rage that John specifically unleashes when he hears about an eighty-year-old great-grandmother from Des Moines getting strip-searched at an airport.

So naturally they had to have Malkin on the air to talk about her book. At first John and Ken were joyous. But after a few minutes of hearing Michelle speak, their faith in her as some sort of an actual historian faded by the wayside and they saw that she was nothing more than a revisionist cashing in at a time of crisis. John finally came out and asked, “Well what if they started interning Filipinos (Malkin is a Filipina)? Would you be in support of that?” Malkin’s shockingly cynical response told me that I had my Cocksucker of the Month for September, “Well I don’t think too many short Filipina women are going to be hijacking airplanes and crashing them into buildings anytime soon.*”

I have so much I need to write at the moment, but I just don’t want this essay to devolve into a screed. Yes, I am aware of the built in irony at worrying about the evenhandedness of a Cocksucker installment; I feel, however, that Malkin’s views are so fundamentally dangerous and so Third Reich-like in their smug cruelty that I don’t want to just rest on my laurels and call Malkin a “cunt,” and a “bitch,” and a “fiend”–all of which she absolutely is.

First of all I need to deconstruct the absurdity of “Racial Profiling.” Racial Profiling is nothing more than bigotry. It is suspecting people of wrongdoing based solely on their genetic makeup. Furthermore, I am well aware of the fact that 2,792 people were killed by nineteen Islamic–mostly Saudi nationals–men on September 11, 2001. I am also aware of the fact that Timothy McVeigh took out 168 folks on April 19th, 1995. If you multiply 168 by 19 you get 3,192 dead. And if you divide 2,792 by 19 you get not quite 147. McVeigh had a better batting average! So I ask you, who is more dangerous? Shouldn’t we be just as worried about Midwestern Crackers as we are about 19 maniac-fundamentalists? And don’t give me that shit about McVeigh having a partner in Terry Nichols. If you want to play that game, those two traitors shitting bricks over the Turner Diaries in a barn had a much higher return on investment than the hundreds of people around the world that helped to execute 9/11. Based on the above, some might accuse me of callousness by turning tragedy into a numbers game. My point, to the contrary, is that we need to protect ourselves against all assholes who want to indiscriminately kill us, both foreign and domestic; those who pray east to Allah, and those who have accepted Jesus Christ into their hearts.

Michelle Malkin gets Cocksucker of the Month honors by exploiting for profit crimes of the past to justify crimes of the present. Let me just show you a little something from her own website;

My aim is to kick off a vigorous national debate on what has been one of the most undebatable subjects in Amerian history and law: President Franklin Roosevelt’s homeland security policies that led to the evacuation and relocation of 112,000 ethnic Japanese on the West Coast, as well as the internment of tens of thousands of enemy aliens from Japan, Germany, Italy, and other Axis nations. I think it’s vitally important to get the history right because the WWII experience is often invoked by opponents of common-sense national security profiling and other necessary homeland security measures today.

So let me ask a couple questions of the Americans reading this rant right now; how many of you are of Japanese ancestry? OK, now how many of you originally come from Germany, Italy, and, uh…Finland, Romania and/or Croatia? Since 53% of Americans have German blood coursing through their veins, I bet that more hands went up for the second part of the question. Malkin even gives us the fucking numbers. 112,000 Japanese on the west coast alone, and a few thousand others across the country. Were there more Japanese in America in 1942? Or was it that some Germans and Italians were interned while all the Japanese living here, the mothers and the children and the elderly, were placed in camps? Furthermore, and I know this because I lived a block from the Fillmore District in San Francisco, the homes and businesses of most of the Japanese in that neighborhood were never returned to them after the war. They were just flat-out stolen. And they got $20,000 for their troubles half a century later.

When I was very young my father asked me this question. Was it better to imprison ninety-nine guilty men and one innocent man, or was it better to free the innocent man and let the ninety-nine guilty men go free? I had no idea then, but the answer to that question has shaped my worldview from the beginning. Obviously I chose then and choose now freedom for the innocent. Malkin is a symptom of the immeasurably colossal price of ignorance. For a few pieces of silver, she is condemning people to suffering based on who their parents were; throwing away due process because of where “those people” come from. While it may be–thanks to Coulter–perfectly acceptable to invoke the name of Nixon for political gain, what Schwarzenegger failed to mention was that he, like Adolf Hitler, hails from Austria. And even if clichéd, it really is true that only a country like the United States would give him the opportunity to stand where he did tonight and say what he said. Arnold is free from the sins of his father. I would love to see an Austrian try and run for office in Germany today. Michelle Malkin, you supreme Cocksucker, let me leave you with one more cliché from the Holocaust, which is especially relevant since your own “homeland,” the Philippines, is teeming with Islamic radicalism and militancy;

* Paraphrased from memory as John and Ken do not have the Malkin show in their archives yet–a Coulter-esq footnote if there ever was one!