OCTOBER 2004 COCKSUCKER OF THE MONTH 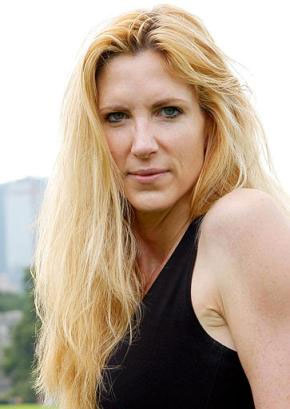 I’ve decided to shift the focus of Cocksucker away from asshole Republicans for the moment and shift it to space alien performance artists masquerading as conservative pundits. I mean Ann Coulter. Lets be honest for a moment here, Ann Coulter, probably more than any other individual (with the possible exception of Tom “The Hammer” DeLay) could easily be Cocksucker of the Year (Actually, DeLay could be Cocksucker of the Last Fifteen Years). She is a raving fucking lunatic employing McCarthyist tactics to achieve Machiavellian ends. Or as Matt Cale said, “she’s a cunt.” I still can’t decide if she is in a constant state of rage over the fact that she has no penis, or if she is the most important pop-artist since Warhol.

Recently, in what is perhaps the only thing funnier than the Bill “Falafel In Your Pussy” O’Reilly harassment scandal or Howard Dean’s noise, was when two kids at the University of Arizona hit Ann in the ass face with a pie. The two were members of “Al Pieda.”

That is the funniest shit out there. Instead of being charged with crimes, these two should be thrown a fucking ticker-tape parade by thinking citizens everywhere. Holy fuck… Al Pieda… Brilliant!!!

Anyhow, I decided to check out Ann’s website because it is almost always good for a few yucks. I was thinking maybe she would mention how Al Pieda is in league with Al Queda, or how Kerry coordinated the whole pie-attack, and will be personally pie-ing every gun-owner in America if elected, after he lets the terrorists win. Nothing on Al Pieda, of course. But. to my amazement–not so much shock, as Coulter more than anyone else is capable of dropping my jaw with her shear audacity–I found this little gem of a paragraph;

“Speaking of which, where are the feminists on war with Iraq? Cameron Diaz’ statement about Bush’s policies  “if you think rape should be legal, then don’t vote”  would have been perfectly true had she been speaking to an audience in Iraq. These people think it is constructive rape to have sex with your husband. America has just gone to war against a regime for which rape  not date rape, or pseudo-rape, or virtual rape, but real rape  was part of the official policy, and they’re against regime-change.”

What a fucking bitch! Dude, Coulter, you cunt, date rape IS rape. Look, let me break this down for those of you without the skills to see through the bullshit. Modern day Republicans hate women. If you have a vagina, they hate you. They hate the fact that women are allowed to work. They are not bothered by the fact that still, in the 2004, women earn 70 cents to a man’s dollar. As anybody with a light on in their skull knows, being pro-life (anti-abortion) is misogyny. They don’t give a fuck about children, they simply hate women. If they really cared about children, why would Republicans fight tooth and nail against healthcare for all children? Why would they be against government funding of programs like Head Start? Why would they try and repeal environmental legislation that keeps crud like mercury out of our water and our fish and deadly chemicals out of the air? The list of shit they want to do or undo that hurt kids is massive. Are you still asking why? Easy answer; they don’t fucking care!!! And, they hate women.

To me, little is more infuriating than Coulter and her ilk’s refutation of date rape. The idea being that the woman was asking for it, the woman led the man on, the woman was wearing a short skirt, etc. Besides the fact that shifting the onus of the crime away from the man and onto the woman is fucking sick, it is disingenuous, too. For reals, lets say you’re out on a date with Coulter and after eating a condor the two of you start making out and you try to shit on her face. I guarantee you that she’ll cry rape so fast… oh wait, bad example. It is a forgone conclusion that Coulter digs scat. Let me try and frame it in a way that Ann might understand. In her mind, while it is OK to go to war against a country because it has rape rooms, if they had been date rape rooms, well, then the prisoners were asking for it.

Look people, I would be the greatest womanizer in history if date rape wasn’t rape. All I have to do is get a woman to agree to let me in her room, and then as soon as the door is shut, alls fair? But I mean, who the fuck wants to have sex with someone against their will? Oh yeah, RAPISTS! Anyway… Coulter = Cocksucker. And not in a good way. Also, I just appointed myself Seargent at Arms of Al Pieda.