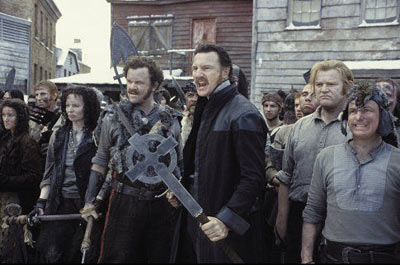 – Daniel Day-Lewis as Bill the Butcher

Jonny is from Los Angeles

The DVD for Gangs of New York might be the greatest ever. Or at least the best selling. Because everyone who sees it in theaters is going to want to have a lot of questions answered. Such as, “What the fuck did I just watch?” Others, as well of course, along the lines of, “Did Scorsese really direct that?” and, “Was that the best facial hair DiCaprio could grow?” will be at the top the DVD buyers’ collective lists. Additionally, we’re going to want to know what on earth Cameron Diaz’s character had to do with anything. Also, what is going on with John C. Riley’s face – I mean, are his eyebrows trying to touch his nose, or what? More importantly, some sort of pseudo-history was being examined, but is any of it true?

Sufficeth to say, Gangs of New York is a mess. A big, smoldering, overcooked Hollywood mess. Too many cooks in the kitchen? Try fifteen producers. My sources tell me that this is a movie Scorsese has been wanting or trying to get made for twenty-five years and that in its penultimate form was four and a half hours long. An hour and a half was chopped off for its Christmassy release. Unlike Apocalypse now, which had about an hour of fat hacked off but was still able to hold itself together, Gangs of New York could use some of that extra flab for support. 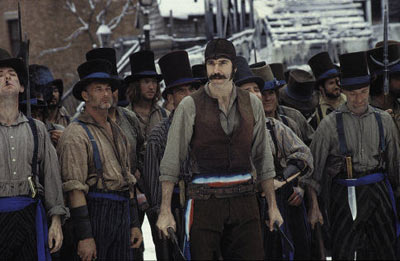 The story is straightforward, tired, heavy handed and stupid. Bill the Butcher (Day-Lewis) killed Amsterdam Vallon’s (DiCaprio) father Priest Vallon (Neeson), so young Amsterdam vows to kill the Butcher. Along the way, he becomes the Butcher’s best friend and confidante, begins screwing and falls in love with (Not in that order) the Butcher’s girl (Diaz) and re-founds his father’s gang, the Dead Rabbits. In the background, we have New York during the Civil War and (yawn) some sense of how corrupt democracy can become when writ tiny upon the backdrop of a large immigrant population.

The real problem, DiCaprio’s literal and figurative big head aside, is that none of this flows. One minute Amsterdam and Jenny Everdeane (Diaz) have daggers at each other’s throats, the next they’re in love and planning to run off to San Francisco. OK, but why? One minute, Amsterdam is tossing a bible over a bridge and telling a priest to go to hell, and the next he is running a gang out of a church with the backing of all the Catholic clergy. One minute Amsterdam is a nothing-nobody from an orphanage and the next he is the only rival to the most powerful man in Five Points. Again, fine, but what…? One minute Monk (Brendan Gleeson) is beating Amsterdam against a wall, the next Amsterdamn and Mr. Tweed (Jim Boradbent) get him elected Sheriff and the next the Butcher has put a cleaver in Monk’s back and bashed his skull in with a club. Huh…? One minute the Butcher and Amsterdam are best mates, the next they’re killing each other, then the next, without saying a word, they see each other as equals leading the downtrodden to some sort of noble defeat against the cruel and arbitrary police of New York and the Union Army. I think. But then, Amsterdam stabs the Butcher in the heart, (just like the Butcher taught him to do) buries the Butcher next to his own father and then we’re looking at the World Trade Center Twin Towers from across the Brooklyn Bridge. I have no idea. 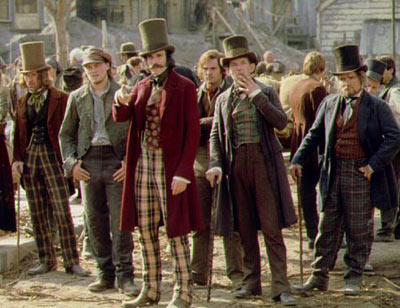 Worst of all from a story telling point of view, there is no tension whatsoever. We know from literally the fist second of the film (“The blood never leaves the blade.”) that Amsterdam is going to kill Bill the Butcher. That is never in doubt, not for a moment. Even when the Butcher has Amsterdam spread out on a table and is throwing meat cleavers at his head, you never will really stop and think, “Maybe he’ll kill the son, too…” You also figure that Leo is going to get the girl and that he’ll get a lot of respect because of who his daddy was. I think Gangs of New York was just a bad story to begin with.

The best, and really only thing that can be said about Gangs of New York is that it is beautiful. I’m sure the fifteen producers were needed to build the incredible sets as much as they were needed to pay all the first tier actors. You know what though? Casino was also beautiful. In fact, more beautiful. Goodfellas was an actual story, told by a raconteur for the love of the story. Gangs of New York is a movie about mobs made by a mob. Nothing is clear, nothing is crystalline, nothing is settled. That said, I am looking forward to the DVD for nothing else than the History Channel documentary it is sure to include explaining what really happened.