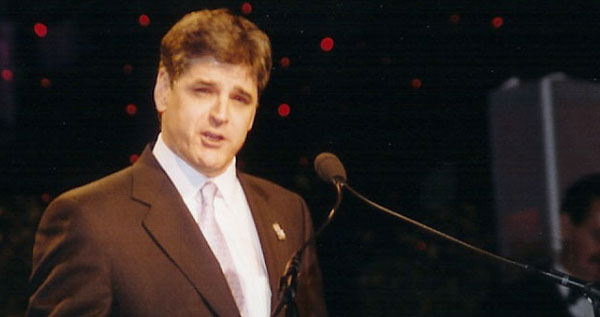 Matt Cale wipes his ass with your death threats…

The words were brief and fleeting, but I’ll eat my own ass if I didn’t hear them. On the Fox program Hannity & Colmes (Hannity & Hannity if we’re being honest about what a fucking pussy Alan Colmes is), Sean Hannity — the most obscenely coiffed right-winger currently on the air — actually suggested, if not outright endorsed, the idea that November’s election might be suspended if we were hit with another terrorist attack in the days before we cast our ballots. Seeing that the train bombings altered the outcome of Spain’s recent election, it is believed that a similar incident on our soil might unfairly put Osama bin Laden’s brother-in-law, John F. Kerry, in the White House. That such a thought was even in the admittedly diseased mind of Mr. Hannity is a clear indication that conservatives are little more than power-hungry maniacs who have about as much reverence for the Constitution as they do the work of Robert Mapplethorpe.

Let’s put this in a historical context for the great unwashed, lest they think it’s a good idea to postpone an election in a time of national emergency. Actually, two examples are all I need: 1864 and 1944. For the vast majority of you, illiterate and semi-retarded as you are, these dates mean little, but for those of us who did not attend school barefoot, they are, respectively, Presidential elections during the Civil War and World War II! Abraham Lincoln and Franklin Roosevelt, both accused of tyrannical ambitions in their day, willingly and without the slightest hesitation, submitted to the will of the people during wartime. There is little doubt that a case could have been made for each (especially Lincoln, given that the war was in our own backyard) to suspend the election, but both men — unlike these treasonous blowhards on the right side of the aisle in 2004 — believed in democracy, freedom, and the Constitutional mandate that fair and frequent elections be held regardless of the circumstances.

In other words, dear Sean, it is irrelevant whether or not the Sears Tower comes crashing down ten minutes before the polls open, or the Capitol is set on fire in the wee hours of November 2nd, or the state of California breaks off into the sea the previous midnight; the polls will stay open. Anthrax, smallpox, radiation of any form, or car bombs round-the-clock, there will be a vote and I’ll be in line even if I have to step over thousands of writhing, puss-ridden corpses to do so. Even a full-scale nuclear attack cannot stop the vote, unless of course these alleged strict constructionists can find the clause that allows for such czarist methods.

So what can account for Hannity’s terrifying suggestion? Outside of the fact that he revealed his long-suspected preference for fascism, or that Republicans are wetting themselves in anticipation of a November loss, I believe that it is nothing more than the painfully obvious — Republicans love to flatter the “will of the people” when only 10% of the electorate show up and vote in some militia-type nutcase, thereby indicating a “sweep” (check turnout of 1994’s presumed “Republican Revolution,” which was nothing more than a few million single-issue, anti-abortion, gun fanatics who finally figured out how to pull a lever), but when the results go the other way, they weep and wail about the elite media and how people have been hoodwinked and lied to. Hell, they love democracy so much that they’re willing to throw minorities off the rolls to prove it! And haven’t you ever wondered why convicted felons can’t vote? I’ll connect the dots if you’re among the slow — arrest blacks and Latinos (Democratic voters, all) in a phony drug war, convict them of felonies, and ensure Republican victories from now until doomsday. Brilliant!

So bring on the attacks, my friends, just to prove a point. I’ve been looking for an excuse to move to Canada for quite some time now, and suspending elections would be the best reason of all. Republicans — especially the Bush/Cheney/Stalin variety — are truly evil people, that is if I believed in evil as a concept. So I’ll put it another way: Bush & Cheney and all his cronies despise you — the voter, the taxpayer, the citizen — because in the end, they care little for the Bill of Rights, although the jury is still out as to whether or not they know of its existence. They prefer that all Americans who do not inhabit penthouses and boardrooms remain afraid, ignorant, subservient, and hostile, so long as such anger is directed at Mexicans, liberals, and Janet Jackson’s tit. Freedom, for them, is little more than the unfettered rights of capital; a curious laissez-faire where corporations are exempt from taxation and regulation, yet benefit from the tax dollars of others and restrictive trade policies that ensure the further exploitation of “lesser” nations. Nothing is more abhorrent to the modern Republican than the truly free; that lone citizen who maintains an absolute freedom of conscience; to say, read, print, and disseminate anything, especially if someone, somewhere has declared it offensive, vile, and harmful to children. Because a free man, in the end, always knows when he is being fucked in the ass, sans lube, by a political party that is bringing this nation to the very brink of ruin.

Thanks, Mr. Hannity, for the clarification. I’m glad someone had the guts to say what too many are thinking.