YAY FOR THE RON ARTEST RIOT 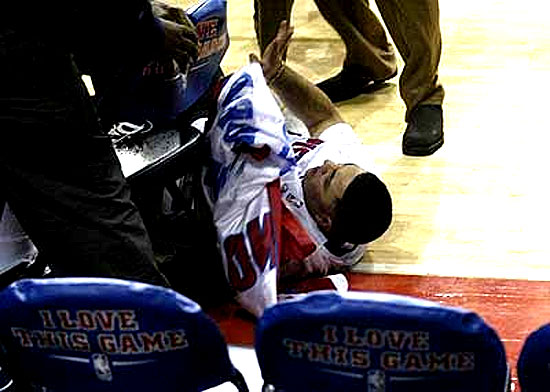 “God Shed His Grace On Thee…”

The Ron Artest brawl in Detroit exemplifies both why I will always have TV, and why a big part of me will always want to cancel the cable and break the rabbit ears. Firstly, the brawl itself was priceless comedy. There should be a 24-hour channel dedicated to the look on the face of that nerdy, wrongfully abused fan when he realizes that Artest is coming at him. I love the drunken, delayed reaction. Artest rises and runs about nine rows up the stands in the dudes direction before he realizes that hes about to be taken to the bank. The blood bank. The fans face suddenly transforms into a hilarious mask of fear, closely resembling Mr. Bill, from the old SNL sketches. I laugh out loud every time I see it.

And what about the tub of crisco who steps up to challenge Artest and slips a couple of straight rights before ONeal sneaks up and drops him like a pregnant girlfriend? Maybe he quickly realized the potential for a seven figure law suit. But from the looks of him, it was more likely that his thinking was, OK, maybe I cant do a sit up. But does that mean that I cant fuck up Ron Artest and Jermaine ONeal? Helllllls No!

As delighted as I was by the mêlée, within my second viewing I was already dreading the eminent tsunami of bullshit that would wash over airwaves for the next week or so. News pundits would solemnly condemn social decay while in the very act of running footage of a fistfight on an endless loop and meticulously ignoring nearly every important news story in the country and the world. 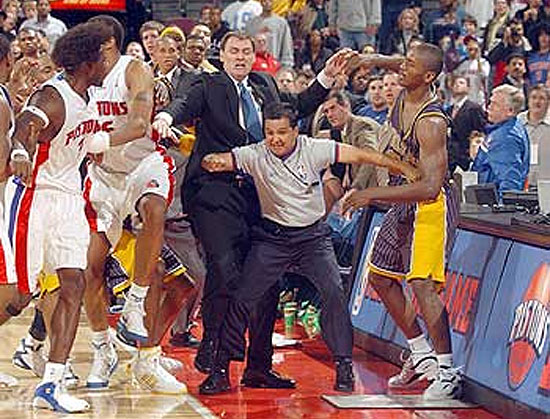 The really annoying thing to me, however, isnt the shoddiness of the news. I gave up on learning what was going on in the world from CNN years ago, and frankly, Id rather they just show entertaining bullshit than pretend to credibility. What annoys me is the tone that pundits, coaches and all public figures adopt after such an event. They put on a solemn face, and try to say the right thing, the expected thing, perhaps with a little twist to score extra points. Remember that kid in class, who would constantly ask questions he already knew the answer to? His other trick was to ask a question that the teacher was obviously just about to answer.

That kid now works at CNN, ESPN or for the NBA, and hes still striving for ass cookies. His job is to pretend to be mortally appalled by the fact that some asshole threw a beer at some asshole and they had a fight, but never to remind you of something genuinely upsetting or disturbing, like the AIDS crisis in Africa or the Karate Kid remake. In other words, hes there to tell you what you want to hear, so you can wallow in your own sentimentality.

More sickening is the extent to which the American public gobbles it all up. Is there another people that so enjoys overindulging in bogus performances of emotion? Theres shit like the Artest brawl, or the utter horror displayed for a month after Janet Jackson showed her boob. But also the way we so totally clung to the grief and indignation of 9-11. For over a year, it seemed that every public gathering had to begin with a maudlin ceremony commemorating the tragedy.

I dont really have any conclusion, having already made my point. So Ill just drink some Vodka and see if I can still find a replay of the brawl; forever.