One thing I will say in favor of the Discovery Channel’s list is that it blessedly leaves out the men responsible for what some will tell you is “America’s only native art form,” jazz. Did you know that most of the so-called “greats” of jazz weren’t even white? While I don’t have a major quarrel with Elvis’ place on the list, why celebrate the man who only did half of the job? It was Pat Boone who took the music of Rock and Roll, then Rhythm and Blues, and stripped both completely of dangerous, jungle rhythms and Negro hyper-sexuality while leaving all those pleasing melodies in place, making music truly fit for mass consumption. 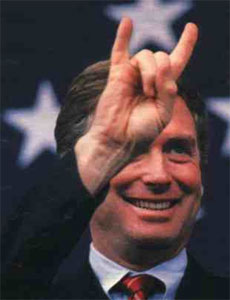 I was both thrilled and proud to see both Presidents Bush and then the Almighty Reagan make the list, but what of this unsung hero who was every bit as qualified, capable and noble? The only thing that GW has, that Quayle didn’t, is Karl “Batcave” Rove. Without someone to protect him from the cruel, spelling correcting, liberal media, Quayle was  alas a great American unable to grace us with his full potential. 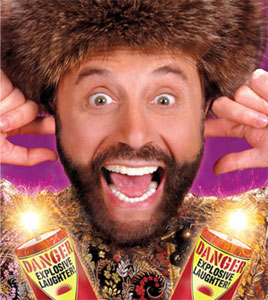 I’ll follow the example of the Discovery Channel list in including immigrants and entertainers on my list. Smirnoff is the best of both. After penning such classic lines as, “In America you can always find a party. In Soviet Russia, the party always finds you,” it’s no wonder he was President Saint Reagan’s favorite comedian. Smirnoff serves as an example to other immigrants, who too often seek to maintain their own, inferior cultures, rather than wrapping themselves up in Old Glory. After years of hard work, his heartfelt patriotism and pro-America attitude have finally landed Yakovf at, what for my money, is the top of the entertainment pyramid: Branson, Missouri. 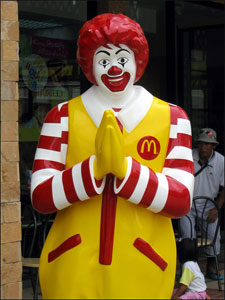 Ronald is America’s real ambassador to the world. Thanks to that appetizing clown, when people across the globe think of our culture, the first thing they think of is the wholesome and delicious food to be found at the Golden Arches. Yet the arches also remind us why America is best because while nearly every country has Mcdonald’s, nobody can eat as much of it as we can.  Again, we can thank Ronald, who’s primary goal is to teach young Americans that chicken needn’t be 100% chicken in order to be delicious. 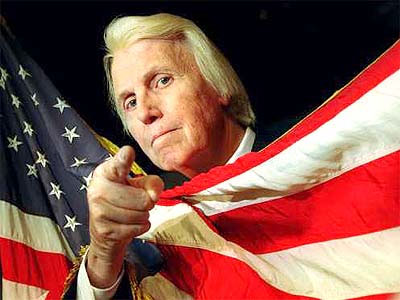 Pleased as I was to see Rush Limbaugh make the list, what about the late father of conservative talk? No, I don’t mean Morton Downey Jr., but none other than Orange County’s own Uncle Wally! Why leave off this gifted prognosticator who was able to foresee, with perfect clarity, the future of American political discourse? Truly a man way ahead of his time, Wally foreshadowed the level of honesty, class and intellect we now enjoy from household names such as Limbaugh, Coulter, Scarborough, Hannity and Savage. 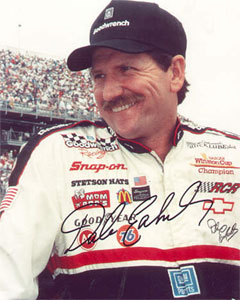 Who could drive a race-specific kind of car in circles with greater speed and ferocity than Earnhardt? No one! Plus he was a Christian Southerner who died and went to heaven to be with Jesus forever. Sure, the Jew York times–under duress–put the news of his horrid death on their front page, but was just one day really enough? I think we both know the answer to that. And  that mustache! Too bad only Americans could recognize his greatness. 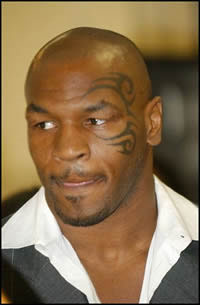 Despite his racial handicap, Iron Mike proved decisively that celebrities are better than the rest of us. Tyson showed that when you are given more talent than anyone else in the history of your chosen profession, you have the freedom to piss it all away. Just be sure to act like a psychotic maniac for a decade or so after your fall from grace. We’ll still love and embrace you with all of hearts. Seriously, what other country could produce a wife beating rapist cannibal road raging poet with a tattoo on his eye and still pony up the $5 million to watch him get beaten yet again, this time by an Irish Pillsbury Doughboy? Those pacifists in Canada? Dream on. 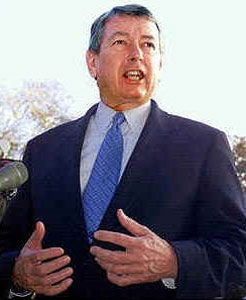 Gone but certainly not forgotten, no other country has the resolve to produce a politician who could lose an election to a dead man (stupid liberal media) yet still be picked for higher office, if not a higher calling. He spent the first year of his tenure picking on pornographers and pot smokers, two industries that account for roughly ten percent of our nations real GDP. More importantly, he covered up a statue of Justice, got his feet anointed with Crisco and was rightly afraid of Cheshire cats (which any good Christian knows are just vessels for Satan). Once the Twin Towers fell, he found his real purpose; subverting the Bill of Rights, revoking attorney/client privilege and locking up any stinking brown S.O.B. who was from a dirty Muslim country or had parents from a dirty Muslim country. Hey, the proof is in the pudding; throughout his tenure, the terrorists did not win. Plus, like Pat Boone, he could sing, dammit! 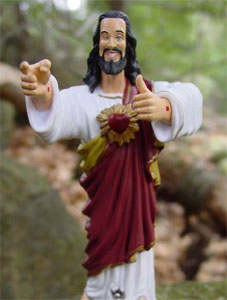 Although, technically, he wasn’t born in America, I’m sure that’s only because it didn’t exist at the time and I’m fairly certain that his return will be staged in Branson. Or possibly Colorado Springs. Certainly the Lord has come to favor us yanks, as he always picks our side in war, even against England. Moreover, he tells our president what to do. Do you think Jesus has a personal relationship with Jacques Chirac? You can bet your baguette he doesn’t. Most importantly, Christ only allows terrorists to murder us when we deserve it. Whether we need a stern reminder to behave ourselves, like the AIDS virus, or a miraculous appearance in a grilled cheese sandwich to inspire us, Jesus is always there for us, his fellow Americans. 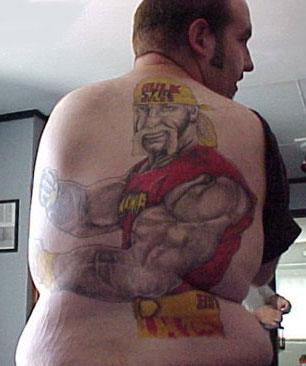 Who else so personifies the true spirit of America? From beating the evil commie-stooge Nikolai Volkoff during Reagan’s Reign to his harrowing escape from the Iron Sheik’s Camel Clutch that mirrors the real life dangers and challenges of President Bush’s war on terror, Hogan is our hero. Through it all he maintained a glorious tan, speedos and a truly American institution–the mullet. We’re talking years after he went bald. The Hulkster even did the unthinkable by body-slamming the mighty Frenchman, Andre the Giant, just as our forefathers cast off the yolk of French oppression. Eat your vitamins, say your prayers and pummel those villainous foreigners.

“I am a Real American” indeed.