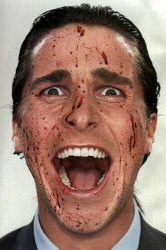 I’ve said numerous times on this site that religion is the most obvious form of insanity that afflicts the human beast, but I am taking this opportunity to narrow my focus on the Christians in our midst. You know the type — the self-righteous, holier-than-thou, judgmental pricks who see it as their mission to strip life of all joy, passion, excitement, and fun. Those folks who talk about Jesus as if they are dating him exclusively; where “love” becomes a wild-eyed form of lust and it seems only a matter of time before they are caught masturbating to his blond-haired, blue-eyed image. As Christianity is the most popular crutch for the weak and the gullible in these United States, it needs to be emphasized that with alarming frequency, these holy rollers for Christ are butchering their young. Not in the womb, mind you, for that would be “murder.” These sweet lambs of the flock wait patiently until the fetus has crawled out of the birth canal before they start carving, drowning, shooting, and now, it seem, stoning. Always — and I do mean always — these young babes are slaughtered at the behest of the Almighty, and I for once am going to agree with the result.

The Christian in question this time (Andrea Yates, another born again Texan, drowned her five children in 2001) is Deanna Laney of Tyler, Texas, faces two counts of murder after smashing her boys skulls to bits with rocks. Needless to say, she claims that she heard the voice of God instructing her to perform this dastardly deed. Let’s take this case point by point. First of all, Deanna was home-schooling her children, which means that she was spending far too much time with her children. With such a 24/7 approach, any woman worth her salt is going to be at least tempted to kill her brood, so no one is faulting her there. Still, given that she was home schooling, we know for certain that she was at the very least schizophrenic because no parent from the Lone Star State, especially poor white trash, has the brainpower to instruct a chicken, let alone a child. It bears repeating that in the years ahead, we will hear case after case of this sort, and without exception they will be found in the world of the home schooled. Second, Deanna performed a public service for which she should be given at the very least a book deal, as she snuffed out two backwater scum who would have at best become ministers for the gospel. If they were being home schooled by a woman who is predisposed to hear voices, I can’t imagine their lives could have ever been very rewarding. Deanna saved us the trouble of being forced to listen to two more obnoxious assholes screaming about their born again status. Third, who’s to say that God didn’t command poor Deanna? I’ll keep repeating myself if I must, but if you believe in God, you have no choice but to accept a murderous cretin as your lord. Believers all, your God has a rich history” of mass murder and barbarism, so quit griping when he’s forced to use a human vessel from time to time.

But Deanna’s case brings up a larger issue, one that is ignored repeatedly in this most religious of nations. Jesus Christ drives people insane and the only sane ones left are atheists. Let me be clear about this: not one life has been lost to a true atheist, or if you choose, “Freethinker.” How can I state this in the face of the “godless” Soviet Union? Atheists, let me remind you, live according to reason, logic, and, above all, doubt. As such, they abhor fanatical worship of the state just as much as a lust for a particular deity. Stalin, Mao, Pol Pot, or any other Marxist hostile to religion demanded that citizens make the government their God, something that a true atheist would never, ever do. Inherently skeptical and suspicious of power, Freethinkers and atheists are beholden to no one and believe only the individual human mind is sacred. Such a man or woman could never sanction murder, unless of course it is of the cynical, theoretical kind practiced here at Ruthless, where we hope that mankind reaches its bloody end, but have no plans to start the process ourselves.

So there it is. Christians have diseased, warped minds wholly incapable of rational thought, and atheists live according to the unflinching power of logic. How many Deanna-like stories do we need to hear before we admit that religion has done nothing for people except help thin the population? So I say let Deanna go free, for her imprisonment sends the unfortunate message that it would be wrong to kill Christian children. Again, I’m not about to pull any triggers, but if they want to eat their own, who am I to refrain from applause? In other words, keep hearing voices, my dear Christian mothers, and never cease in your effort to rid us all of the unfortunate. Your campaign of carnage only proves that if anyone is to inherit the earth, it will be the godless and the damned. Can’t say we’ll miss you.