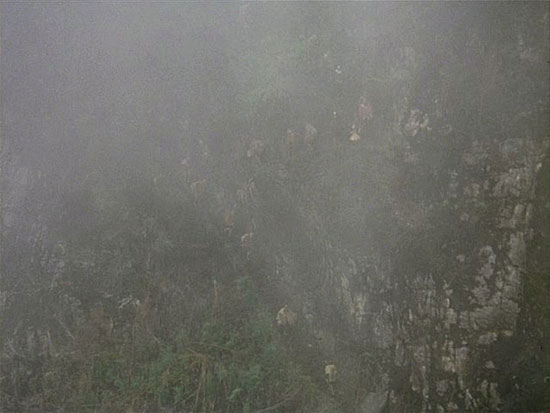 Watching Aguirre: Wrath of God you realize that Apocalypse Now is nothing more than a rich kid playing with expensive toys. I don’t want to concentrate on this comparison too long, because Apocalypse Now is a fantastic movie in its own right. But by comparison Coppola just doesn’t hold a candle to Herzog. Or can’t. Or both. Sure, Apocalypse Now is a descent into madness, yaddy yaddy yadda, but it is a very specific American style madness (and yes, I know that Apocalypse Now is based on British author Joseph Conrad’s Heart of Darkness). But, to quote Hunter S. Thompson, “it just never got weird enough for me.” In Aguirre, everyone is out of their fucking minds. Completely. Just so totally whacked out. Even the stated purpose of the conquistadors seems totally perverted and mad from the get go. Whereas, again to contrast, Apocalypse Now might make certain aspects of Vietnam look like a bad idea, but it never outright condemns Willard for his passion for the pointless mission he is assigned. Remember, the original draft of the clusterfuck script (penned by Milius) had Kurtz and Willard teaming up and fighting the savages. And Kurtz, while a little wonky, ain’t no Don Lope de Aguirre. 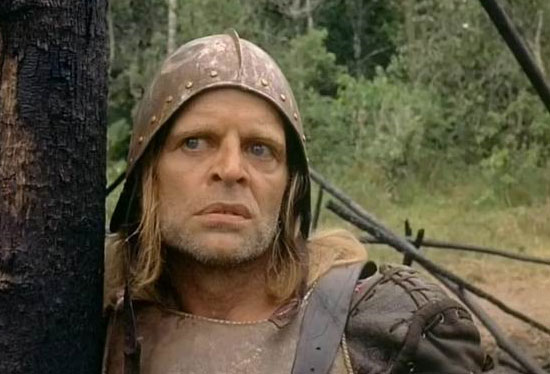 The film opens with one of the most astonishing shots in all of cinema. Seriously, I can only think of a few other scenes that compare; two of which were filmed by Herzog and the other being the opening of the original Star Wars when Princess Leia’s little ship is being chased and the Imperial star destroyer comes into view and keeps going and going (for those of you about to bitch and moan, put a sock in it; a monument is a monument). Even if you turn Aguirre off after three minutes, you will be completely satisfied. We are treated to some of Herzog’s trademark unspoiled nature shots–areas of the world and locations that are truly virgin. And, as he says again and again, he is not drawn to them because of their beauty, but because of their horror–“the harmony of mass murder.” In this shot, we are treated to a mountain that seems to be hanging in clouds. Just hanging there. Because of the movement of the clouds, the mountain seems to be alive. At exactly the moment you think blood is pulsing through it on some odd surface veins, you slowly realize that you are looking at people. Hundreds of people pouring down from the peak. The beauty is otherworldly and really impossible to describe. Two things you should know: A) This scene was the backup. The script called for hundreds of pigs to approach the camera atop a high glacier followed by the conquistadors and their Indian slaves. Logistics (mostly altitude sickness from what I have read) prevented it from being filmed. So, to reiterate, one of the very most breathtaking scenes every captured on film happened on the fly. Man… B) The people are coming down the slopes of Machu Piccu!!! Allow me to quote myself from my review of My Best Fiend: Klaus Kinski:

I am simply amazed at the restraint shown by the director, for who could pass that up? Seriously, you are at one of the most famous and stunning locations in the entire world–with a camera–and you actively decide not to use the “prop” so as not to cheapen your film. I’m staggered.

Still staggered. Herzog: what a fucking bad ass. And this is all before we see Kinksi’s tortured face! Wow. 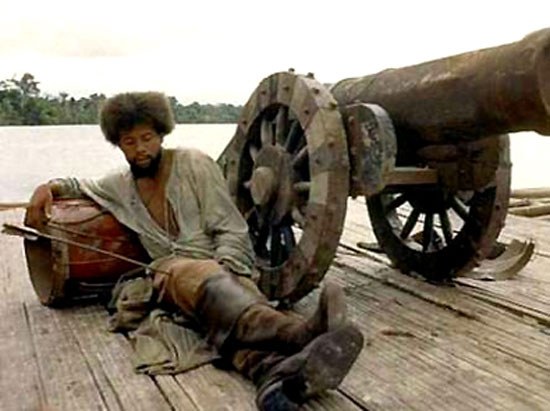 When we finally do get a look at Kinksi, well, few, if any actors have ever so inhabited a role so fully. In My Best Fiend Herzog repeatedly mentions that when Kinski was on his worst behavior (on future projects; Aguirre was their first collaboration) he becomes Aguirre. So who is Aguirre? He’s “The Great Traitor,” “The Wrath of God.” I’m going to have to feed you some plot at this point, so if any of you cry babies have a problem with hearing details about a thirty-two-year old movie, now is the time for mommy to go heat your milk. After destroying the remnants of the Incan civilization and enslaving its survivors, Francisco Pizarro is leading a team of, well, bandits, deep into the heart of the Amazon in search of El Dorado, the fabled and quite mythical “City of Gold.” We first meet Aguirre as he is savagely berating and beating the Indian slaves (and fellow Spaniards) because they are not trekking through the mud fast enough. Almost immediately the futility of the undertaking becomes apparent. For what good is a rickety cannon deep in the jungle prime evil? Why carry women about in little dolled up boxes? Herzog, me thinks, would describe it as small f “formality.” To quote from his Friendster page (the “who I want to meet section”), ” I detest formality. I find all of those formal people to be very base and vile. I would much rather eat potato chips on the sidewalk than eat in a formal restaurant.” Because the conquistadors were incapable of adaptation–and not just the Spanish, but all peoples everywhere–they were trapped by their norms and customs, which were utterly fucking ludicrous! And Aguirre is beating them because they are not sticking to these norms strictly enough. Changing gears a little, man, Kinski was a savage beast in this one. He’s quite obviously for reals beating on these men, and in truth, he is probably actually furious with them. Method acting? He is Aguirre; he is the wrath of God.

It quickly becomes obvious to Pizarro that continuing the expedition in its current configuration is totally impossible. So he decrees that a team will be drawn up consisting on three rafts full of men who will continue down the river in search of El Dorado. Oh, and if they are not back in a week’s time, he’ll assume they’ve been killed by heathens. Pizarro makes Aguirre second in command, giving the leadership role to a man named Ursua. Also, again because of the dictates of formalism, a member of the Royal House of Spain–Don Fernando de Guzman (Peter Berlinger)–is made to accompany them. Within minutes it becomes clear that their quest is doomed. The tiny rafts are no match for the vicissitudes and violence of the river. One of the rafts gets trapped against a cliff in an eddy, and the other two rafts are forced to make camp on the other side of the river and wait for the trapped raft to break free. Day turns to night and what we get is a spectacular shot of about eight men just stranded, pathetically stranded, in the midst of a raging torrent. By morning the men are all dead or missing. Ursua states that the bodies must be given a Christian burial. Aguirre blows up the dead men with the cannon. Motherfucking Ruthless. Ursua, is not pleased. Soon, the river washes away the other two rafts and Ursua decides that they will walk back to Pizarro–the mission is over. Not so fast, as Aguirre stages a mutiny, shoots Ursua and appoints Guzman Emperor. Technically, he is still only second in command, though Guzman is the definitive example of a puppet king. Fat, useless, arbitrary and cruel, he relishes his new position even though he has no real power to speak of. Pomp and circumstance only, a truly naked emporer, and in the middle of nowhere! Aguirre commands that a new larger raft be built and once again, they set off down the river in search of their fortune.

Obviously, the theme of this film is want of money and power leading to a descent into absolute madness. Everything on the raft goes horrible, irreconcilably bad. They are forced to sail only in the center of the river, the land being deemed far too dangerous because of the natives. However, for approximately an hour of screen time, men are being killed by tiny arrows that randomly come flying out of the jungle. Moreover, they are starving to death, as the only one that gets any food is fat Emperor Guzman. Like a true fiend, Aguirre snarls through it all, constantly demanding that they press on with their (by now obviously) futile quest. At one point he states that any man who crosses him will be cut into 198 pieces. Any man that takes one grain extra of rice or one drop too much water will be imprisoned for 155 years. It needs to be stated, and I am definitely not the first to say this, nor will I be the last, that Kinksi’s delivery in this scene is perhaps the greatest acting I have ever witnessed. It’s a shame I don’t speak German, because having to look away at the subtitles from Kinski’s manic face is simply a tragedy. When you watch Aguirre, view this seen once to get the content, and then rewatch ten more times for Kinksi. Totally unprecedented acting that even manages to “break down the fourth wall” successfully, and in a fully engrossing and terrifying way. I’m giddy and frightened just recalling it. As the raft of fools goes deeper and deeper down the river, the bleakness and hopelessness only magnifies. In fact, the passengers seem resigned to their fate; madness and death. Hilariously, until he is killed, Guzman keeps claiming more and more land for Spain, boasting at one point how they have increased the size of the empire ten fold. Of course, two men dies during his proclamation, but no matter, for now they are rich! Lunacy, shear lunacy.

Just before everyone is wiped out, a small raft containing two Indians sails out to them. The Spaniards immediately rip the gold ingot from the man’s neck, taking it as a sure sign that El Dorado exists. They ask him where he got it and he points in a direction. Ah ha, proof! There’s El Dorado! Brilliantly, Herzog magnifies this metaphor by having the Priest begin totry and convert the savages to the word of God. For if a piece of gold is “proof” that a city of gold exists, then a book containing “the word of God” is surely proof that God exists. When the Indian places the book against his ear to hear the word of God, he is slaughtered on the spot for mocking not only the Lord, but also the priest. The pettiness is gigantic and affecting. Eventually, everyone except for Aguirre is dead (including his daughter). The raft is now inhabited by corpses, Aguirre and hundreds of little monkeys, the latter to whom Aguirre announces his plans. After conquering El Dorado he will sail to New Spain and conquer it. Then he will take Mexico. Then he will sire a child with his daughter (remember, she’s fucking dead!) and this will begin a pure race of pure traitors. This sequence is as incredible as any in the movie. I mean, monkeys! Not to hammer on it again and again, but the phrase “fucking insanity” is a massive, near-monumental understatement. And I am left wondering if Herzog intended this to be a cautionary tale not against the futility of riches and power, but against life itself. Regardless of the answer, Aguirre: the Wrath of God has everything; world class acting and directing, stirring, almost otherworldly visuals, great music (the pan flute rules) and a story sound enough to keep you mesmerized for weeks afterwards. A must, must see.