MORE WORDS & PHRASES THAT NEED TO BE BANNED FROM PUBLIC USAGE 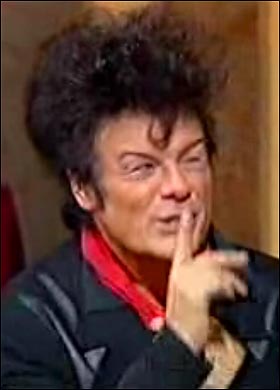 I’ve never been a fan of the word “blog.” Short for “web log,” it was always too cutesy and readily accepted and embraced for my taste. After all, aren’t we really talking about an online diary? Do we need newspeak to cloud up what is actually going on? Luckily, at first most blogs sucked ass and nobody paid any attention, so I wasn’t worried. But then the 2004 election and all the run up to it happened and some pretty excellent people (James Wolcott, anyone?) started writing some tremendously excellent shit. They began to be referred to as “bloggers” in the press. Hell, from LARP you get Larpers, so like, even though I hate the term, I understand it. Worse was when they started applying that appellation to their own selves, as in “I am a blogger.” But, like, whatever. Not rant worthy.

And then somebody coined the phrase Blogosphere and the sensation of having spicy vomit just behind my tongue has not left me yet.

Problems with “Blogospere” are many and varied. Here’s what it means; It’s the interconnected world of blogs. Get it? We all live in the hemisphere, birds fly in the atmosphere and bloggers all get together and exchange witty turns of phrase in the “Blogosphere!” I’m going to get a half-caff Venti, care to join me? The same aesthetic that blindly accepted Volkswagens and Volvos as “hip” and/or desirable cars, thinks that large coffees are actually called “ventis,” deeply believes that Radiohead and the Pixies speak to a generation and that actually believe using a Mac makes you a more creative person, have fallen head over heals in love with the term Blogosphere, as they will do with any trend that floats their way. Seriously, think how fucking embarrassed your children will be when they see photos of you wearing trucker hats and $300 sunglasses that look like $4 sunglasses leaning against your new Audi. I’m digressing.

Some dufus named John Miller says the following about the Blogospehere:

“The word was meant as a clever pun combining “Blog” with “logos”, a Greek word meaning logic and reason. And while bloggers do often use logic in dissecting arguments, I love the word Blogosphere because it happens to capture another truth: the Blogosphere is a biosphere of its own, a Media Ecosystem that lives and breathes just like any other biological system.”

Stop it, stop it please!!! It’s not a fucking “ecosystem.” They post shit about politicians they don’t like on websites. There is nothing special about it, save for the fact that the powers that be have lost control over the dissemination of information. My friend Sande Cohen came up with the phrase “Consecrated Nihilism” to describe the act of the beneficiary of a given system gaining power and authority in/over said system, and then selfishly distorting the system in question so that others cannot follow in their footsteps. Essentially, climbing the corporate ladder and then kicking it out from under you once you’ve reached the top. The term applies to the art world and the business world as well as those who have found success on the internet (see the unfathomably snooty and increasingly irrelevant Gawker).

Anyway, “bloggers” were beating the media at its own game. They were doing a better job of reporting and pontificating about shit than the traditional press was. However, the CNNs of the world aren’t about to share shit, so they grammatically subjugate these people by relegating them to the Blogosphere. NBC news covers the real world, all y’all reside in the little kids sandbox of the Blogosphere. And the motherfucking bloggers ate it up! I’m sure better metaphors exist, but as the great Schultz points out in his review of the Third Matrix movie, Separate but Equal is inherently fucking lame. So, to all of you who write about shit on web sites; stop calling yourselves bloggers, stop calling your opinions blogs and get your fucking selves out of the “Blogosphere” and back into the real frigging world. You’re not cute.

A misnomer if there ever was one. Just realize how hateful and cruel the implied or collective unconscious meaning of the term “conservative” is if the need is felt by them that self-apply the label to pre-empt it with some form of the word “compassion.” Seriously, “compassionate sinister fuckers” has as much meaning, and probably does a better job of expressing the truth of what these duplicitous bastards represent. Why bother white-washing your crimes if you’re just going to keep committing them anyway?

Politicians as a species DO NOT have ethics. By rule. What the fuck do these assholes think they are going to find? A spine? A snake with no slither? Iraqi weapons of mass destruction? In Washinton D.C.? You’d be better off looking for virgins in the San Fernando Valley. You might find one. Look, if you are just starting to realize that Tom Delay is the most crooked fuck to hold public office than you should be recalled. To paraphrase Hunter Thompson talking about Nixon, “[Delay is] so crooked that he [needs] servants to help him screw his pants on every morning.” Stop wasting our tax money on this shit, admit that you don’t care because the hammer basically wrote the blueprint for how you got your slimy ass into office and get back to waging illegal wars on nations who pose us absolutely no threat. Oh wait…

Frankly, I’m just fucking sick of this one. Remember back in Gulf War II when every media outlet had a reporter “embedded” with such and such Division? As if they were doing some of the fighting? Please. One of my favorite scenes in all of cinema is when Michael Lerner suddenly becomes General Lipnick (or Admiral or whatever) in Barton Fink. Make people feel like they are suddenly part of the war effort, and BOOM, they are your slaves. They begin to act like soldiers, taking orders from Uncle Sam instead of taking orders from their First Amendment mandate to report on the government, not for the government. I mean, would a truly free press be surprised by either the total lack of WMDs or the insurgency? You bet your ass they wouldn’t. Worse now, is that the press have fallen in love with the term and we are tortured by daily reports of Schmuck Reporter Whoever being embedded with the Minutemen down in Arizona or at the Michael Jackson trial. Yeah, and I’m embedded with my desk forty hours a week. Please, somebody, embed a boot of these fuckers’ asses.

That’s Neither Here Nor There

Man, does that phrase boil my blood. Listen to me; you are not funny, clever or witty if you toss that out into casual conversation. The only acceptable way that phrase can be used is the following: People who say “That’s neither here nor there,” are intellectually bankrupt morons who are so desperate to be thought of as nifty that they fuck themselves in the ass by trying.” Seriously, the grammatical equivalent of wearing a beret.

You Don’t Know Me From Adam

The worst of them all. Holy Hell do I feel like wringing necks when I hear this one. I guess the vernacular intention is to sound folksy, or down home–some sort of unwashedness. Then there is of course the religious meaning. Sprinkling our speech with tidbits from the bible is an old tradition among us English speakers. But usually it takes the form of, “jumping Jesus on a pogo stick,” or “thank the fuck Christ, no!” However, “I don’t know you from Adam,” not only insults no mythological creature, but is so dully banal that I feel dirty being around those who speak it. Seriously, right now, say a few iterations of it out loud. Repeat with me; “I don’t know you from Adam; You don’t know me from Adam; We don’t know them from Adam.” Lost your lunch yet? Just knock it off and get back to, “Who the fuck are you and what the hell do you want?”