2005 has seen the worst of our fears realized. tWit got reelected, we’re in Iraq for the long haul, between them all Democrats have exactly one testicle, Will Farrell still draws breath and Green Bay has a losing season under Brett Favre. Never has clearer evidence been presented to me that I should pack it in and move to Paris. Seriously, our country is fucking embarrassing. We just cut healthcare for the elderly. But, no, from my tiniest of internet bully pulpits, I choose to stand and smoke and fight. I know I have been, uh, lax, on updating Cocksucker of the Month with anything resembling frequency, so I give you six piles of filth to make up for my, uh, “laxness.” And of course, my resolution in the New Year is to “get r’done” every month. Right after I learn to fly, of course. Below, I have compiled an insanely incomplete list of Yearend Cocksuckers. Most notably absent are Dick Cheney and Mike Brown, and like, well… I have no good excuse. But, I think you will find my choices not only disturbing but fucking alarming. And, if history is any indication, 2006 will explode your brain. Enjoy/cower in fear.

So Judith, you Cocksucker, you wanted to feel the power between your legs, huh? Seriously, you sucked so much cock that you finally decided you need one of your own? Your penis envy was so out of control that you had to send 2,150 American boys and girls (so far, more will be slaughtered) to their meaningless deaths so you and your strap-on could feel alive? And, do we even count Iraqis as people anymore? Cause Judi, baby, you fueled the deaths of about 30,000 of them. That number will go up, too. And again, unlike most corrupt, detestable wastes of semen and ovum, you didn’t sell your fucking country out for cash — you did it because you were born without balls. I bet you felt like a big man, sitting there with Dick, Scooter and Donny the Rum, nodding and agreeing with everything they said; not necessarily comprehending it all, but you got the gist; sell this war. At all costs, sell this war and we’ll totally be your friend. Which is the exact opposite of what you are supposed to do, you pathetic excuse for a reporter. For instance, you wrote the following in September 2002;

More than a decade after Saddam Hussein agreed to give up weapons of mass destruction, Iraq has stepped up its quest for nuclear weapons and has embarked on a worldwide hunt for materials to make an atomic bomb, Bush administration officials said today. [Full article]

As you apparently do not fully realize, you dickless twat, the part in the Bill of Rights about congress making no laws abridging the freedom of the press means more than just protecting high ranking officials you know to be guilty (because, in Plamegate, you are part of the crime syndicate). It means that if the government makes a claim, and in this case we’re talking a claim disputed by everyone in the world save Tony “The Poodle” Blair and that fucking retard Howard in Australia, you as a journalist are supposed to at least check into it. Pay lip service to the other side. Hell, you worked for the New York Fucking Times — why not try to get an Iraqi leader to comment? Hell, how about anybody with an opposing view? You didn’t do anything of the sort. You just parroted the lies that your Capital Hill buddies told you. Like this one from the same article; “The jewel in the crown is nuclear,” a senior administration official said. “The closer he gets to a nuclear capability, the more credible is his threat to use chemical or biological weapons. Nuclear weapons are his hole card.”

Remember Blix and ElBaradei, the UN weapons inspectors who didn’t find a single shred of fucking evidence? And you didn’t even bother to mention those two guys, nor any international opposition, nor any domestic opposition (Joe Wilson? Richard Clarke? My roommate’s dog?). Because that would have kicked your little house of cards down. Instead you wrote;

Still, Mr. Hussein’s dogged insistence on pursuing his nuclear ambitions, along with what defectors described in interviews as Iraq’s push to improve and expand Baghdad’s chemical and biological arsenals, have brought Iraq and the United States to the brink of war.

Um, bitch, wasn’t it really the Bush Administration’s “dogged insistence” on making shit up that led Iraq and the United States to the brink of war and beyond? You fucking damn well know it was. And a big part of that machinery of deception was you, ya cunt. Since you managed to emerge from prison even more cocksure and lousy, the only punishment befitting you properly is to be locked in an auditorium with the families and friends of the 2,150 American troops you willingly helped to slaughter. Cause those people won’t give a flying fuck about your gutless, dickless lies. 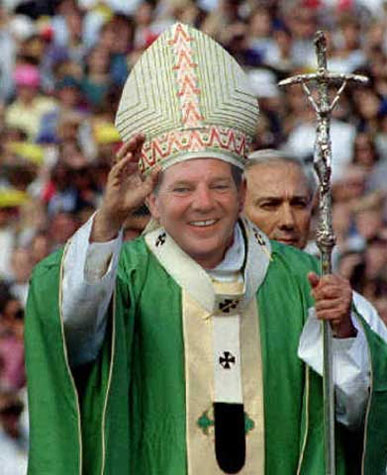 Tommy, Tommy, Tommy. I still remember back in 1997 when Mother Jones named you the dirtiest and most corrupt politician in existence. Hell, I remember back in 1999 when the greater Houston area (5.2 million folks) passed Los Angeles (17.5 million souls) as the city with the worst air in the nation, mostly if not entirely due to your crazed machinations that repealed certain provisions of the Clean Air Act. Remember, the Hammer is the motherfucker who called the Environmental Protection Agency the “Gestapo.” Oh, and you, a supposed champion of the people, also advocated “intimidating” Judges who don’t rule like he wants them to — a popular tactic used by the mob in Italy, Columbia and Mexico. And you said this;

So you should just drop dead from that alone. But you’ve been a very busy Cocksucker these last six years, haven’t you Tommy?

Public documents reviewed by The Associated Press tell the story: at least 48 visits to golf clubs and resorts; 100 flights aboard company planes; 200 stays at hotels, many world-class; and 500 meals at restaurants, some averaging nearly $200 for a dinner for two.

AP’s review found DeLay’s various organizations spent at least $1 million over the last six years on hotels, restaurants, golf resorts and corporate jet flights for their boss and his associates.

How Christ-like of you. What would Jesus tip his private butler at a Caribbean villa? So, you are without doubt the most corrupt fucker in Washington since Agnew accepted payoffs in cash. Which really is one hell of an accomplishment. And then there is the matter of your bullshit redistricting, thereby sentencing the good people of the great state of Texas to non-representation for years if not decades to come — especially brown Texans. And then you went and spent MY tax dollars (federal money) to chase down the Democrats who fled to Oklahoma… Dude, what the fuck is wrong with you? Oh yeah, you are Tom Delay, a rotten, lying, cheating, thieving, cocksucking scumdog of the Occident. I can’t wait until you’re in jail, for no prison sentence will ever be as well deserved. 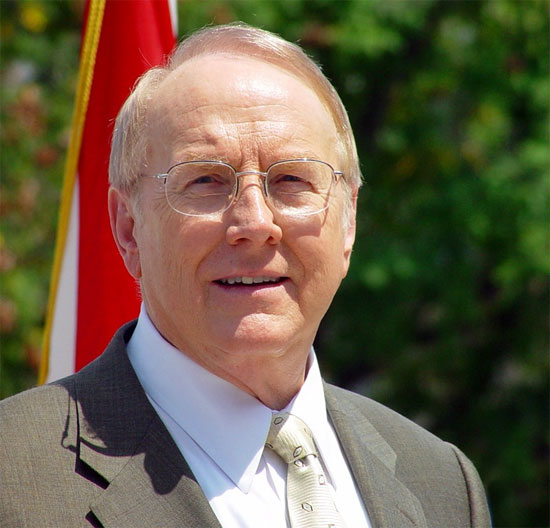 Who’s really running the country, or at least thinks he is? Dr. Dobson, the most self-righteous Cocksucker the state of Colorado has ever produced — which is saying a lot. Hot Karl Rove spent four years courting Dobson, who warned the Bush administration that is they didn’t get more aggressive in pushing his pro-life, anti-gay rights agenda, they would “pay a price in four years.” Dobson is quick to discount the massive Diebold Machine fraud and other treachery that took place around the country and specifically in Ohio and claim near sole responsibility for winning tWit a second term. But never mind all that, this monolithic asshole thinks that not only is homosexuality “curable,” thereby making it a disease, but that a stage exists known as “pre-homosexuality,” the result of having a weak father-figure. Naturally, the “ex-gay” he put in charge of his gay-curing program Love Won Out, John Palk, turned up at a gay bar in 2000. Dobson called it a “temporary setback.” Confusing ignorance and hatred of gays with “faith” is one thing — but using said power to essentially block Senate appointments and Supreme Court Justices… man, we’re fucked. This is the same clown who advocates beating children, no matter how he spins it. Cause he’s a cruel prick. James, you fucking reprehensible Cocksucker, let me leave you with this;

“We establish no religion in this country, we command no worship, we mandate no belief, nor will we ever. Church and state are, and must remain, separate. All are free to believe or not believe, all are free to practice a faith or not, and those who believe are free, and should be free, to speak of and act on their belief. At the same time that our Constitution prohibits state establishment of religion, it protects the free exercise of all religions. And walking this fine line requires government to be strictly neutral.” –Ronald Reagan

Oh, and your son is a closeted-queer. 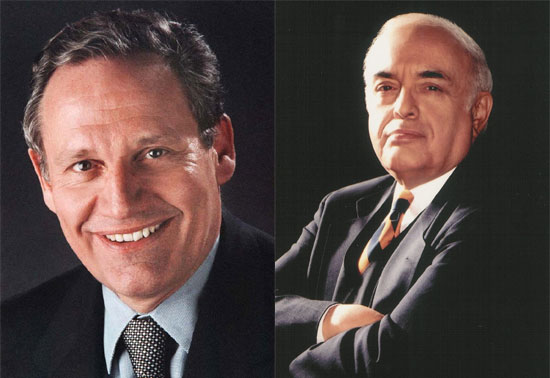 Standing tall on the American journalistic landscape like two giant, pitted-cocks well past their prime are Woodward and Novak. Two supposed reporters who know exactly who the “Senior Administration Official” is that leaked Plame’s cover. To toss out an old chestnut, “A newspaper’s job is to comfort the afflicted and afflict the comfortable.” Instead they choose to protect the most powerful men the world has ever known; Woodward so he can have unfettered access to the upper echelons of the state and Novack because he’s a complete and total partisan asshole. So, instead of reporting, they take $50,000 speakers’ fees and you and I pay out millions upon millions of bucks for grand juries and what will no doubt be decade-long legal wrangling. But really, Woodward is the worst of the two, because he is such a fraud. What happened to the idealistic reporter who along with Carl Bernstein, toppled Nixon? Oh yeah, he wasn’t doing it out of conviction — he was doing it for the fame, the prestige and the cash. And then you have Novak… I can’t wait for him to go down for colluding with the White House and getting their lies lined up. Patrick Fitzgerald don’t take kindly to obstruction of justice, you bloviated fucktube. Seriously, each of these dickheads should take a note from Bernstein, “The media is more powerful than our government institutions, but we are squandering that power.” Fucking Cocksuckers. 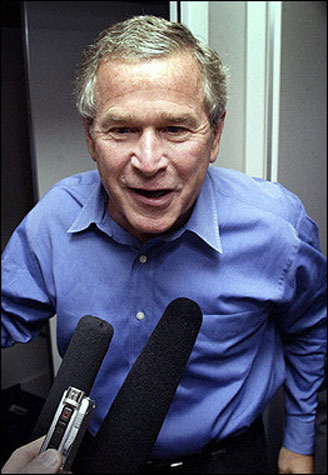 And how could I leave off little George Jr., Orwell’s deepest nightmare manifested in flesh? The litany of bullshit is essentially without end; Iraq, “You’re doing a heck of a job, Brownie,” Harriet Myers, black CIA locations, begging the Congress for the ability to torture people, biggest deficit ever, etc. Everyone knows the score. Give tWit a lemon and he’ll make you a nice, cold glass of bubonic plague. But his latest offense is simply inexcusable. Dear Cocksucker in Chief; shredding our most basic civil liberties is not protecting our civil liberties no matter how you spin it. Dude, you have a fucking secret court at your disposal that does nothing but rubber-stamp all warrants (OK, fine, all but four) presented to it. And you choose to circumvent it? Well played, dipshit. Will this finally be a nail in Bush’s political coffin? I’d love to hope so, but I’m far too fucking jaded for that. Instead, I think I’ll get back on heroin. For political purposes. Numb………….