UNCLE SAM WANTS YOU TO KILL 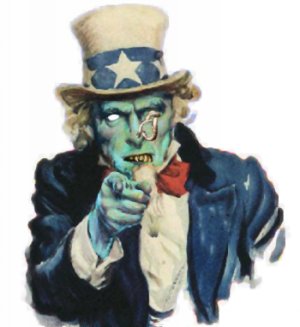 Tucked away in one of the more unreadable sections of the poisonous No Child Left Behind Act is a striking provision: secondary schools must, under penalty of losing their financial aid, not only allow military recruiters access to their students, but also their contact information [Educate Thyself]. Needless to say, this is a gross violation of privacy, absurdity bordering on fascistic insanity, and a sure sign that the armed forces are quickly losing their appeal as a method of suicide for the nations young, but most of all, this might be the one thing that pushes me into violent retribution. How I can achieve such things given my abhorrence of firearms remains unclear, but I figured it was best to first register my absolute disgust with such a blatantly illegal (and immoral) tool. If I didnt want America reduced to the pungent odor of total destruction before this knowledge, surely now I have nothing to root for regarding this countrys future. Not only do I want us to lose badly in Iraq, I am waiting with bated breath for the next round of terrorist attacks that will hopefully reduce our cities to a cinder. Still, as usual, it will not be external foes that drive us to ruin, but rather our own arrogance, vanity, and blind stupidity. Curse us all, ye merry gentlemen.

This hidden artifact reveals an essential truth about conservatisms view of the American people — they are here to serve, die, bleed, and spill the contents of their bowels into the earth so that a microscopic fraction of us can have a few more cocktails aboard our yachts. Schools are not for learning, therefore, but mere centers of preparation: give them enough to pass rudimentary examinations, but nothing that will interfere with the right of the Pentagon to secure willing dupes for the slaughter. Essentially, conservatives, lacking healthy sex drives that can be admitted in mixed company, prefer to stroke their cocks to the idea of young, hardened boys being blasted to ribbons for their bottom lines. In sum, the rich can only achieve orgasm through death — the death of cherubic, virginal flesh on distant shores. Its homoerotic, sure, but more than that, it stands as a pathological indulgence that dehumanizes cleanly and without error. Humanity is utterly valueless, then, serving only abstractions when necessary, but quite functional in the reduction of lifes mysteries to the contents of a safe.

And lets not forget these recruiters — easily the most obnoxious firebrands outside of a used car lot. The military is, of course, home to the least interesting folks on the globe, as what possible depth could there be to any man or woman whose sole mission is to murder by official decree? Crackers, bumpkins, and sots all, yet the recruiter — having a quota to push him along on his death march — is the most reprehensible because he uses lies to promote the killing. Once in boot camp, the role is clear — I must block out all that which interferes with the killing instinct. Before that mindless experience, however, the youth must be duped and captured; snagged from brighter days with contemptible untruths. Weve heard it all — get an education, learn key skills, even see the world. Technically these things are pursued in the course of a military career, but at bottom ones role as a soldier is to clean up shit, wait, shine boots, contemplate the backsides of fellow recruits, and murder non-whites defined as incompatible with “democracy.” One warm body is as good as another, although the fewer options in life the better. Hope and opportunity, then, are the surest ways to prevent a career in fatigues.

Oh, but the story doesnt end there. Theres an additional wrinkle forgotten by even the best of us. Remember, this legislation, far from reaching into every corner of society, only affects the public institutions of our land. Golly, this just might mean that the wealthier members of our fair country, quite accustomed to avoiding sacrifices of any kind, will sire spawn exempt from the propagandistic forces of these robotic salesmen. Sure, its a terrible cliché to argue Rich mans war, poor mans fight, but what better sign of our privatized times than the wholesale abandonment of equality under the law because of a systemic fear of the poor? Few things define American life so completely as the genuine belief that once an individual enters a particular tax bracket, he is no longer obligated to dirty his hands with the business of death. Surely, people die all the time due to policies and actions of the few, the privileged, but the actual killings are carried out by the very poor they despise or, in the case of a hit involving an ex-wife, a Hispanic gardener will suffice.

Its fitting that the Bush administration tie a failed educational policy with a failed war, and the militarys difficulties in sending confused teenagers to their deaths is the one sign that perhaps, Americas kids arent so worthy of extermination as once thought. In normal times, I would be the first to advocate sending the snotty brats to early graves, but if there is anything I hate more than your average adolescent, it is your average Marine. And to blackmail our already financially strapped schools to foster this Hitler Youth endeavor is so audacious as to be nauseating. But rather than protest, fire back, or even blow up ROTC buildings as in the salad days of the late 1960s, the American people seem to believe that the military deserves a seat at the free speech table. I do not agree. The price of admission to the armed forces is a surrender of all rights under the law, which is why one should avoid it in the first place. But I do not speak only of the soldier as lacking Constitutional guarantees (if such things can be stripped from prisoners, they can — and should — be stripped from folks their moral equivalent); I refer also to the top brass and institutional hierarchy itself. They do not have the right to attend functions, appear on public property, storm schoolyards, or even utter opinions on the airwaves. They are lobotomized, corporatized, homogenized filth of the first degree; and theyve already stolen away too many babes in the night. Should the price of an education include the possibility of death in an unjust oil war of convenience? Abso-fucking-lutely NOCut these Generals off at the knees and finish the job with what you have left.