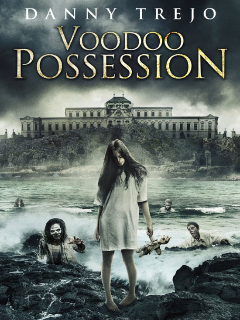 It is stated in this film that Voodoo is “an ancient religion” that is “over 400 years old”. Some may scoff at its relative infancy, but who are we to argue with something that has been around as long as the works of Shakespeare? There are many forces that our Western minds do not understand. We believe that we are the masters of our world, yet we cannot even parallel park without breaking down into tears. Or at least I can’t. But Voodoo understands. Voodoo sees the true face of our reality. What we see before us is merely the world of appearances. The world in itself is, in fact, a low-budget “horror” movie that can’t even afford to give Danny Trejo 10 full minutes of screen time. This is where we live, America. This is how it is.

We find ourselves not in the land of middle class suburban life promised to us, but inside the cursed relic known as Voodoo Possession. Now, I will admit that I found its title somewhat confusing. Is it referring to Voodoo itself being possessed by spirits, or to someone being possessed by Voodoo spirits, or to someone possessing the powers of Voodoo? Maybe they mean “possession” in the sense of someone possessing a WiiU. To further add to the confusion, I will note that during the course of my rigorous scholarly research of this film on the Internet, I found that its alternative title is A Voodoo Possession. This title seems to imply that there is only one voodoo possession that is the focus of the film, whereas there are, in fact, multiple voodoo possessions on display. Why would they try to undersell their film like that? Why would they include such unnecessary specificity? I don’t understand.

Oh, Danny. If only you were here to guide me. I’m so lost without you.

Now, it’s not for lack of trying on his part. He even takes the time to deliver several minutes of background explanation of Voodoo and its various spirits around the 25 minute mark. But Danny can only do so much, as his presence in this film is limited to videos off of a USB flash drive watched on a tablet by several of the characters. We never see Danny in the flesh at any point. He doesn’t even bother to take his shirt off. It’s a brave new world of DTV film appearances: not only is your character completely superfluous, but your character is only seen via flashback, and those flashbacks are introduced by a supporting character holding up one of Lexar’s finest. Danny Trejo couldn’t have done a better job of distancing himself from this film if he tried. I commend him for his ingenuity here.

In the absence of his gentle guidance, I find myself relying on my pre-existing knowledge of Voodoo, which consists entirely of that which can be learned from Live and Let Die. To summarize: James Bond sleeps with Solitaire so vigorously that she loses her sixth sense, Baron Samedi can return from the dead (or maybe not), and Yaphet Kotto is fucking awesome. Really, that’s all one needs to understand both Voodoo and life in general. But Voodoo Possession apparently feels that this knowledge is not enough, and expands on the lore with a whole collection of spirits and symbols as well as an in-depth discussion of the three planes of existence using three books and a salt shaker. Man, Voodoo is complicated. Is there going to be a test on this?

Anyway, this movie is the age old story of a guy who has been estranged from his brother for the last five years. The brother, Cody, went to Haiti to work as a doctor and attempted to help mental patients who were believed to be possessed by voodoo spirits. The guy, Aiden, goes to Haiti to investigate Cody’s sudden disappearance at the behest of his girlfriend Bree, who is a reporter for a tabloid TV show. Their investigation leads them into the darker corners of Haitian Voodoo, into the shifting planes of reality that lie within one’s memories and dreams, and into the mysterious world of corrupted AVI files taken off of a USB flash drive. It’s just riveting, riveting stuff.

What can I say? This was a bad one, guys. Halfway through the movie, our characters find themselves trapped in the plane of existence between the human world and the spirit world. This realm is made up of the memories of those that inhabit it. They follow the trail of Aiden’s memories to get back to a point where both Aiden, Cody, and Bree share a memory, then branch off from there to find Bree and Cody. This storytelling mechanic allows the writer to stack flashback upon flashback while allowing for color commentary and expository dialogue by our characters at the same time. It’s just what DTV movies have been missing: excessive padding and needless exposition. But never fear, for one man has unlocked the secret that allows exposition itself to have exposition. It’s just turtles all the way down in this one.

Through all this endless talking, we piece together the overall story of the film. Apparently, Aiden and Cody’s stepfather was a douchebag, and abused Cody when they were children. To defend Cody, Aiden poisoned the stepfather’s scotch and subsequently beat him to death with a shovel in the living room. Their mother tried to get rid the evidence by cutting up the body in the basement, stuffing it into a plastic bag, and hiding it behind a locked door. This act gnawed away at them, and caused an entity referred to as “The Tormentor” to manifest and torment them. Doesn’t he do anything else in life? It must be rough to have your entire itinerary mapped out by your name. What if he wants to watch Jeopardy one night? No wonder he’s so upset.

Their mom takes them all to a hypnotist so they can move on, but the hypnotism only works on Aiden. Their mother eventually commits suicide in the first scene of the film, Cody takes to drinking before attempting to face his demons in Haiti, and Aiden learns to overcome The Tormentor and their collective guilt throughout the film. Sprinkled in with all of this is some stuff about Aiden and Cody’s estrangement, about Bree cheating on Aiden with Cody, about the supporting characters’ issues with their families, and probably some other things. But honestly, I sort of stopped paying attention after the Asian girl died, so whatever.

I can’t believe I just spent four paragraphs attempting to summarize this story. It really is a mess. But the most hilarious part of it all has to be when Voodoo manages to act through the medium of a tablet on at least two occasions. Seriously, a Voodoo symbol is displayed on the screen from some paused video file, Aiden places his hand near it, and subsequently has some Voodoo flashback/memory/whatever as a result. Are you running VLC with root permissions or something? Why would you ever do that? How does this happen? Not to be outdone by that scene, the tablet is later used to warp them about the in-between world, as Aiden watches a video of his brother to find a shared memory to latch on to. Is that the real tablet, or just the memory of the tablet? And why do they insist on playing the files directly off of the USB flash drive, rather than copying the video files onto the tablet and watching them there? Do tablets not give you that much hard drive space? What the fuck is going on?

Also, Danny Trejo sacrifices a chicken at one point, but we don’t actually see the sacrifice. We just see the aftermath, as well as Danny Trejo exclaiming, “You want blood? Take mine! Take mine!” when he realizes the chicken blood has not appeased the spirits. This was the high point of the movie, by the way. Why didn’t they just remake Live and Let Die with Danny Trejo as Bond? I don’t understand DTV filmmaking today.

Anyway, 91.5% of this movie does not feature Danny Trejo. It does feature a machete, but that machete is wielded by someone other than Danny Trejo. I can’t even deal with this. I mean, I tried to write a review of Machete Kills, but it just turned into the words “ELON MUSK” written over and over, periodically split up by screenshots of Lady Gaga as Chameleon Numero Tres. But now this movie has the audacity to not only waste Danny Trejo, but not allow him to play the character with the machete. No, seriously. Who makes this stuff? What is the matter with them?

This film is just a failure on all fronts. It’s almost like RedBox has low standards. Who would have thought?