Freethinkers: A History of American Secularism by Susan Jacoby 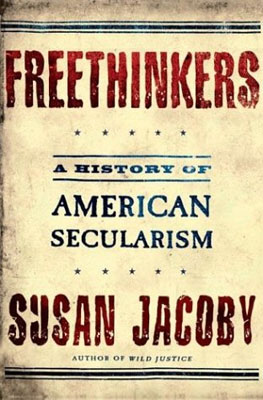 Susan Jacoby’s feisty, uncompromising account of the true
American heroes; the men and women who have challenged religious
orthodoxy, prevailing norms and values, and just as often the belief in
god itself. Rather than simply attack those who seek to create a
Christian nation that has never existed, Jacoby charts the lonely road
taken by agnostics, atheists, and freethinkers — by her definition all
those who have used science, logic, reason, and simple human compassion
to create a better, more just world. From the early days of the
Republic to the depressing days of McCarthyism, we are treated to
fascinating, rebellious lives who rightly determined that the belief in
a deity, far from liberating mankind, has often helped justify
oppression, servitude, and fear. And far from being figures on the
margin, these people have been at the center of controversy, change,
and revolution. If life is in any way tolerable in these United States,
thank a freethinker. 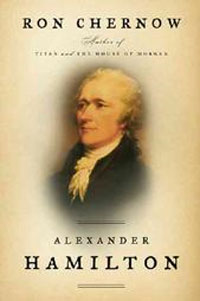 A landmark work of historical biography, Ron Chernow’s Alexander Hamilton
settles the case once and for all — Hamilton, more than Washington,
Adams, or even Jefferson, is most responsible for how we live now. Both
the architect of our financial system and the ablest champion of a
centralized state, Hamilton’s genius cannot possibly be overstated.
Hamilton’s stature aside, Chernow’s work lives and breathes because he
refuses to retreat into dry academic prose, believing instead that a
man must live in order to reach a modern audience. But, as with
all great biographies, this is a portrait of an era; a time when men
could churn out blueprints for a nation’s economy in the time it takes
us to burp and choke our way through an episode of Desperate Housewives.

For some reason, the only sports books I can read are on baseball,
and this is one of the best. A pure nostalgia trip, I will admit,
Pearlman’s warts-and-all account of the 1986 New York Mets is fun,
bawdy, and often pure sleaze, but he makes his case quite well that no
better baseball team suited up during the latter half of the 20th
century. From Darryl Strawberry and Dwight Gooden snorting pounds of
coke, to Lenny Dykstra’s raging alcoholism, to Ray Knight’s
holier-than-thou religious kick, this is a tale of virtue, sin, and sex
that the tabloids would trip over each other to tell. Still, despite
the gossip, this is about a team on a mission and the players that
seemed to signal dynasty, but instead faded away into obscurity,
madness, and wasted talent. 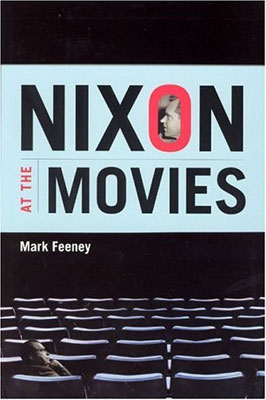 Nixon at the Movies: A Book About Belief by Mark Feeney

At times all over the place with speculation and pseudo-psychology,
Mark Feeney’s unique take on America’s most fascinating president is
also a meditation on the movies, and in particular, what they meant to
a truly passionate cinephile. Despite Vietnam, Watergate, and
nationwide rioting, Nixon had time to screen over 500 movies during his
abbreviated tenure, from the White House screening room to his retreats
in California, Florida, and Camp David. Nixon loved John Ford most of
all (and the unwatchable Around the World in 80 Days), but, as
expected, avoided foreign cinema and some of that era’s more
experimental works. Still, it is telling that Nixon left early only
once (West Side Story, which proves he had great taste),
enduring many bad films along the way. Still, this is more than a mere
grocery list of what the president watched. Organizing the book into
chapters/titles (i.e. Double Indemnity, Advise and Consent, Two Rode Together), Feeney explores the life of Nixon in terms of the cinema of a particular period.

Cronies: Oil, the Bushes, and the Rise of Texas, America’s Superstate by Robert Bryce 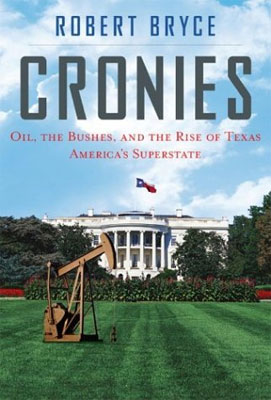 If you want to view America’s past and (shudder) future, take a long
look at Texas, America’s leading light for pollution, corruption, and
megalomania. While eventually narrowing its focus to the House of Bush,
Bryce spares no party in this blast against the Lone Star State, as LBJ
helped bring Kellogg, Brown, and Root into the halls of power from the
beginning. Any race to the bottom — low wages, deregulation, illegal
gerrymandering, gutting the treasury — has its origins in Texas; a
state so fat from federal taxes that it threatens to explode from
hypocrisy. From NASA dollars to Pentagon contracts, to the oil
depletion allowance that all but subsidizes Texas crude with (to use
the words of the Right) “our money,” Texas is an all-American whore any
ten gallon hat-wearin’, buckle-sportin’ nitwit would be proud to take
home to momma. Bryce’s account left me shattered and depressed, but at
least I can live with the comfort that Denver isn’t Houston. Not yet
anyway.