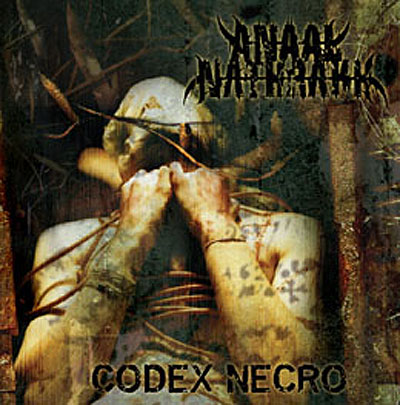 Im not sure what to think of these two guys. Its clear that they
spend more time on their computers than I do. That much I know. This
can somewhat accurately be described as digital, electro-black metal,
with a much faster BPM than your average UK Hardhouse mix. I wouldnt
be surprised if these guys have a Roland 303 and make trance beats when
theyre not listening to black metal.

The music is really, really, really fast. The guitars are fuzzy
in the Emperor vein, and the drum machine, while not very cool, is
programmed well at some points; One of the songs, I cant remember
which, has an interesting kind of a breakbeat interlude. Otherwise,
nonstop blasting over mediocre buzz-riffs.

One thing these guys got going for them is the vocals.
Absolutely out of control. Its obvious that they are distorted, but
man, they are fucking horrendous– like glass gurgling projectile
shredded esophagus vomit screams.

When Anaals first EP came out, Ill admit, I was impressed.
The sound was new, cold, harsh, ugly, and oh those vocals! But I dont
think this type of thing makes for a successful full-length album. The Codex Necro is a good example. After four or so songs I became bored, so I turned on the World Series of Poker on ESPN. Not even the Event Horizon sound-byte was cool enough to keep me interested. This album did about as much for me as Marduks Panzer Division, which wasnt a hell of a lot.

Essentially, Anaal is going to have to mix it up in my opinion,
kind of like the D&B records they most likely spin on their
Technics 1200s. They use a multitude of wacky sound effects that I
think they should build on, while maybe cutting down on the Omar
Santana hardcore. I believe they recently signed up with Earache so
well see what happens. In the meantime, they might want to consider
listening to some Samael to see how a drum machine is really used.