The NBA Cares A Lot!

From the time you were a little kid, youve loved and supported your team, making our players millionaires and adding to our owners billions.

We all travel the country and sometimes the world, enjoying wine, women and song in five star hotels.

One day, we thought, You know what would be even better than all of that? A little bit more.

Carmelo Anthony’s estate. Like all of these homes, subsidized by taxpayers.

Our business has uniquely loyal customers and we could do a lot more to exploit that.

So we used your devotion to blackmail you. We said, Take tax money meant for schools, roads and emergency services and use it to build a new arena for us instead…

…or lose the team that makes your insignificant, little life a bit happier.

In most cases, you caved in. The NBA has looted $3 Billion in public money since 1990. The NBA cares about that. It is about 60,000 times the average salary of a teacher.

The new arena you pay for will be so lavish that attending games will become a status symbol. Well be able to charge much more for tickets and get even richer.

With you putting up all the capital, and us taking all the profits, we cant lose.

P.S.We know you paid to build the arena and all, but you might not be able to afford tickets anymore.

LOL just kidding. I make $20 million a year because of this stuff.

Then we go back into the communities and take a lot of pictures of ourselves returning .01% of the money we took from them. 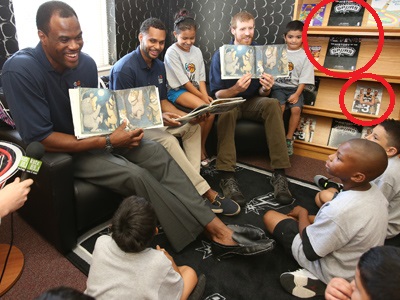 Note, much of the “$7,000 gift” seems to just be promotional material for the NBA.

Here’s what we gave to one school, according to nba.com. “Some $7,000 worth of new books. New furnishings and board games. Life-size portraits of NBA basketball players on the walls.” Yep, a lousy seven grand. And if they wanted the token gift that allowed us to stage our PR scene, they had to plaster their library with NBA advertising. We call this program…