Get Rich Or Die Tryin’ 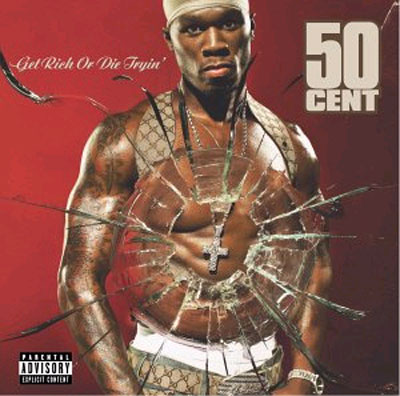 Well we’re supposed to like 50 Cent cos he’s for real; he’s from da street yada yada yada. So fucking what? Fair enough you’ve maybe got more right to talk about this kind of shit than PN News, but is there any chance you could at least do it in some way that is at least halfway interesting? This shit just bores the pants of me.

For a start, most of the songs have about as much creativity as a quadriplegic art class. The song will start with some drumbeat, and then well it just doesn’t stop, no breaks or anything. I’m not even sure if there are actually different beats for each song. If they are different, you’d be hard pressed to notice.

There seems to be no attempt to make the backing track exiting either. Yeah there’s stuff plonked over the beat but that’s just the same thing repeated over and over and over and over get the picture. The music doesn’t seem important at all, its merely there, with ol’ 50 rapping over the top.

Why isn’t rap music producing guys n’ gals who’s voices have at least 1 interesting quality in them. I don’t think 50 Cent uses more than about 4 notes on the whole CD. I’ve listened to this about 3 times now and I barely notice as we move from one track to the next. It’s just a monotonic borefest that I simply tune out after a while. It doesn’t engage me at all, not in the way the guys from Spooks do or even 50 Cent’s mentor Eminem. 50’s tone is about as interesting as my old English Literature teacher’s was when he was droning on about Laurie fucking Lee or somebody for hours and hours on end.

Couldn’t we have MC Tracheotomy or something? Sure that’s very monotonous too, but at least it would be funny. Imagine

Me And Ma Homeys Goin’ Huntin’ For Bitches

emanating from MC Tracheotomy’s voice box. That I’d pay good money for. Not this drivel. Sure there’s far worse stuff out there. This is no way as bad as R Kelly or some of that shit but it’s far from being excellent either.

I think someone once said, “Don’t Believe The Hype”