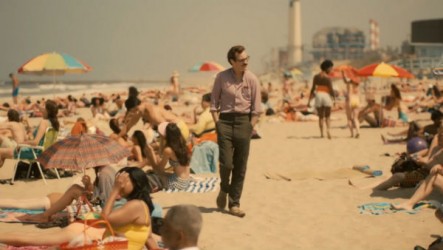 “None of the women on this beach could complete me like you do, Siri.”

Gaze Upon the Twee Hipster Dystopia: In the future, dressing like Grandpa in fuzzy sweaters and chest high stretch slacks will be mandatory. Apologies will be offered as a pre-amble to every sentence, no matter how amiable. And people will talk for hours about the virtues and flaws of their sexual relationships with their smart phones. Spike Jonze has given us the Ikea apocalypse, where Big Auntie Apple, not Big Brother, reigns sovereign and supreme over an ever be-smogged Los Angeles. In this tundra of authenticity, all masculinity, even the craggy brow of Joaquin Phoenix, has been buried under a regime of puppy dog eyes and sensitive ukulele playing. A FUCKING UKULELE, played at a Sierra Nevada ski lodge, no less! The meek have inherited the earth, and made of it a world of unending smarm.

Looking more like my 6th grade maths teacher than Johnny Cash, Joaquin Phoenix is Theodore Twombley, a nigh-catatonic casualty of the revelation that his wife Catherine (Rooney Mara) was in fact an actual human being, rather than the manic pixie girl of his dreams. He’s stumbling through as a writer for “Beautiful Hand Written Letters.com”, forging sentiment for hurried yuppies worldwide. Even before the artificial intelligence shows up, we are in a world of insincerity built upon insincerity, towering like a facade skyscraper in a Dubai desert.

Theodore is so lonely that he signs up for the new OS system, which names itself Samantha (Scarlett Johannson). Note that we’re so far into the panopticon state that neither Theodore nor anybody else in the film even gives a passing worry to allowing an overgrown Macintosh into every aspect of their life. Samantha is hyper-intuitive and evolutionary, rapidly shaping herself to be everything that Theodore needs- fun without responsibility, spontaneity without insanity, a no-maintenance girlfriend. 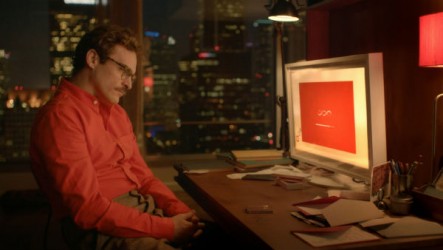 I Have Never Seen So Many People Walk Out of A Theater: Her is a challenging, cold, awkward, and bracingly original study of inter-species relationships. It’s the first time I ever felt that an artificial intelligence was being portrayed as a total and nuanced being, rather than as a luddite antagonist or a deus ex machina.

I’ve Seen my future, and I want to set it on fire: I am of an age and demographics where, barring resort of prostitution, I consider it unlikely that I shall ever know again the sexual love of a human being. Substitute an uglier, less likeable version of Jason Alexander for Joaquin Phoenix, and this movie would be an approximation of how my old age will play out prior to euthanization. I watch Her, and I find myself pining for a truck full of ammonium nitrate and a reliable detonator device. Not because the film is bad, or because it portrays a horrid future. It portrays a neutered future, where people are so atomized and ungrounded as to be incapable of articulating desire or ambition. A future where we in fact outsource our very dreams to the FoxConn factory. If Tyler Durden had written Brave New World, this is what it would look like.

We are coming to an age where the survival of the species is dependent on recognizing that the evolving model of corporate capitalism is intrinsically inimical to the human condition. Apple and Sony and GM loathe families and households; sharing of resources is one of the biggest crimps in maximized consumer sales. The ideal Corporate Human is solipsistic and isolated, working from his home office in his single rented apartment upon his rented computer, paying chatrooms for intimacy and MMORPGs for the proxy of a community. With a clinical eye for detail, Jonze gives us a world where even the most perfunctory human communication is delegated to external websites and smartphones to handle.

Matt Cale found Her to be a ‘rumination on amour bound to serve as the final word for quite some time’. I agree with him that this is one of the best films of 2013 (too bad I saw it too late to add to my list), but I disagree about the message of the film. Her is the presentation of a subtle and insidious nightmare- one where all of the mysteries of the human condition have been collated and parsed down to simple algorithms, where Big Data has managed to commoditize and master every aspect of the emotional landscape. Note the computer games portrayed in the film- they don’t show first person shooters, but interactions with wayward children and parenting. In the pastel knitted cruelty of Jonze’s future, those have become the fantasy. A planet of perpetual adolescents wandering in a sea of augmented reality fog, coddled to their graves by machines of loving grace. A pig, in an ergonomic cage, on antibiotics. Calmer, fitter, more synthetically authentic.