In No Particular Order

Fresh Off The Heels Of His Top 10 Most Ridiculous Black Metal Pictures, Mike From Hobart Continues To Call The Faggoths On Their Shit 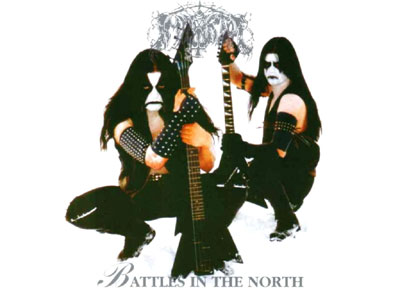 Battles in the North

This album is, at the same time, totally fucking classic and totally
fucking terrible. Now that I reflect back on it, I wonder how I ever
liked it. Probably because I was young and impressionable, and maybe
even a bit lonely. Anyway, Abbath’s drumming was just fucking
heinous. I mean, seriously, it must have the highest missed-bpm count
of any black metal album in history. Naturally, the drums required more
from Abbath than on Pure Holocaust, but the poor guy just couldn’t keep up no matter how many times he unzipped his pants. Come to think of it, the entire album sounded bad on every level and was a step down from Pure Holocaust.

Thankfully, Horgh
strapped on his “your puck ain’t gettin’ past me, bitch” shin guards
and hopped aboard the Immortal caboose, improving the band in the
latter part of their career even though their pics grew more
preposterous with each album. By Damned in Black, it was hard for me to take them seriously anymore. Wait, I guess I never took them too seriously to begin with. Nevermind. 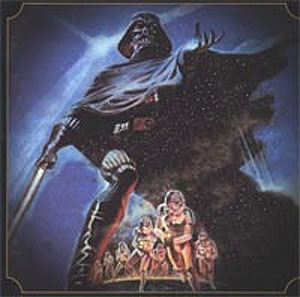 Arguably the worst black metal album ever recorded. IT and ALL
birthed a stillborn with this one. No, better yet, a fucking crack
baby. This was a musical abomination, through and through, with ALL’s
wretched vocals to top things off. Sure, the whole concept of Vondur
was a joke, but that doesn’t mean the record blew relentlessly. This
was some of the most low-fi black metal ever, blowing away even Darkthrone
in terms of downright ghastly production. The only cool part about this
was the cover art featuring Darth Vader. Their longsleeve shirt, don’t
ask me how I know, said, “Panzer Legions of Vondur” on the back, and as
everybody knows, anything related to black metal that uses the word, Panzer should generally be ignored, if not ridiculed, i.e., Panzer Division by Marduk, or Darkthrone’s Panzerfaust, which had one cool song. 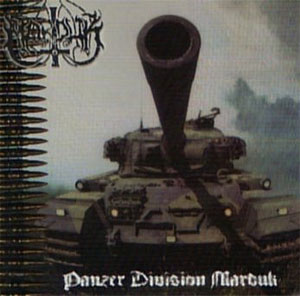 This album starts off in the classic Marduk vein with a kickass
track that stays cool for approximately thirty seconds. The rest of the
CD drags its ass around like a worm-ridden hyena on a hot afternoon.
Christ this album was boring. Every song sounded the same, and Legion,
bless him, had totally lost his voice by then. He sounded like a
haggard-ass, cranky old man shouting satanic slurs at neighborhood kids
from his rocking chair, er.., throne. You got to give it to him though.
I mean, the guy basically destroyed his throat in the name of Satan. That’s pretty fucking Ruthless. I’ve said it before and I’ll say it again, Heaven Shall Burn reigns supreme. 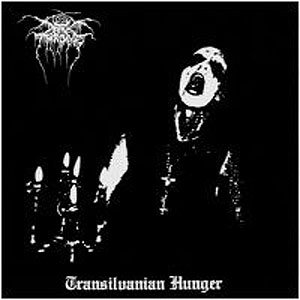 I’ll admit that I was excited to get my cassette of Soulside Journey back in who knows the fuck when. I was huge fan of the first two Paradise Lost (also on Peaceville) records at the time, and had been living on Gothic when I decided to check out the label’s other prospective band, Darkthrone. Shortly after listening to Soulside Journey, I decided that Darkthrone was a band that I would not follow, primarily because Soulside Journey was mediocre death metal, plain and simple. So naturally, I did not get Transylvanian Hunger when it came out, but heard it several years later after reluctantly listening to Panzerfaust and thinking, well, there were a few good riffs, and Quintessence was good stuff…

Now there are two distinct sides when it comes to debating Transylvanian Hunger.
There are those who would say that this is the best, raw (which
typically equates to shitty) black metal album of all time. And there
are those, like me, who would say that this is one of the most
overrated heaps of steaming black metal manure of all time. If I want
raw black metal, I’ll listen to Gorgoroth’s, Pentagram, or Ulver’s, Madrigal, or hell, I just won’t fucking listen to it because it’s a waste of time.

This album is inexcusable. I generally like to hear more than a
kick drum and an occasional crash in my black metal. Sure, it has a few
moody riffs, but overall, it’s monotonous, subdued, and boring. If you
sit in your room listening to this, and honestly think, “Wow, I’m
really diggin’ it. This sounds good,” then just shoot yourself now and
save the rest of us the trouble of supporting your destined-to-fail ass
in the future. The only positive thing I can say about Transylvanian Hunger is that the vocals are harsh and work well in the mix, unlike Panzerfaust, where they sound perfectly horrendous and drown out the predominantly shitty music. Darkthrone’s highlight was Total Death as far as I’m concerned. I believe it was Hellhammer
that said black metal bands that intentionally/unintentionally have bad
production aren’t doing so because they are “true,” but because they
want to cover up the fact that they don’t know how to play their
instruments. 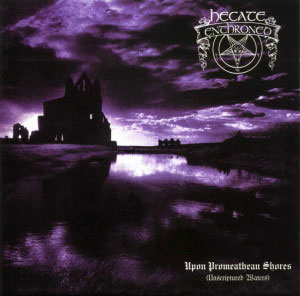 Man, if this wasn’t the biggest Cradle of Filth rip-off ever! It’s kinda like Haemorrhage ripping off Carcass–blatant and totally uncalled for. And who the hell would rip Cradle off anyway? Founding member Jon [Ed Note: Weakest black metal name ever!]
was in Cradle for a brief time, so I guess it must have inflicted some
sort of serious and lasting influential trauma. I will admit that this
band improved with subsequent records, but seriously, what a stinker of
a first album. If you could imagine Vempire— not quite as
ridiculous, of course– but with bad production and even cheesier synth
additives, then this is for you! Also for fans of Dimmu Borgir. 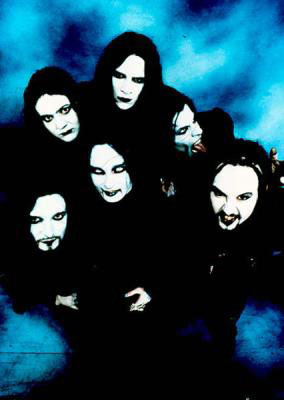 OK, in fairness, they have had three good songs. Wait, no,…one. And yes, we all know they’re not black metal. They are Faggoth Metal, a close cousin of black metal.

In Memory of Celtic Frost 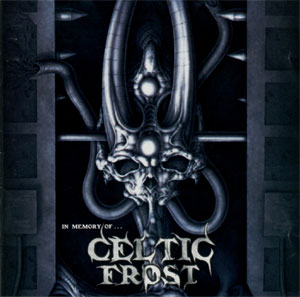 Released during the shit-tsunami of Dwell Records “tribute”
albums that we were all forced to suffer through, this one by and large
was the biggest letdown. Celtic Frost had some good stuff, but you
wouldn’t know it by listening to this crapilation. Mayhem’s cover of Visual Aggression was the only good track. Not even Opeth could save this from being an utter and humiliating flop. Anyone who’s heard the Emperor cover of Massacra knows that it might just be the worst cover-song ever recorded. Enslaved stunk up my stereo yet again, as they usually have since Frost. And as much as everyone loves Dark Realm, Sadistic Intent didn’t pull through either. Flagrantly bad.

Crusade from the North 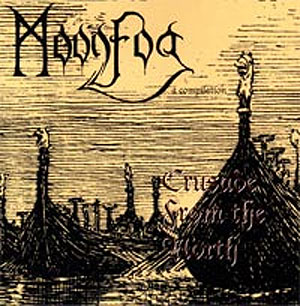 It always amazes me when black metal bands spend all their time and
money on artwork, packaging, and layout, instead of practicing, writing
good songs, and getting a good sound. Crusade from the North is
a fine example of Moonfog taking a bunch of shitty rehearsal and demo
material, whipping up a cool cover with crafty packaging, and selling
it as a double-disk compilation. I’m glad I got my copy for free back
when it came out. There is not one song on here worth spending the 15
bucks for. I recently saw some euro-trash asshole trying to sell the
gatefold LP version for the equivalent of 60 bucks on ebay.

This one is basically the Satyr/Fenriz sideshow for the most part, and a dismal one at that. The only halfway decent track is Satyricon’s cover of Born for Burning. Otherwise, steer your ship clear of this fruitless crusade and check out the Moonfog 2000 compilation instead. 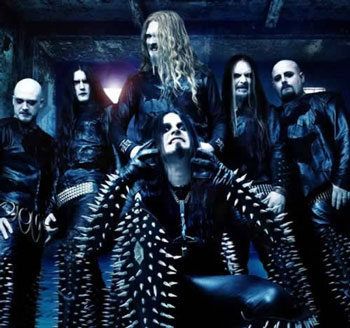 Anything after Enthrone Darkness Triumphant

Sure to please fans of Cradle of Filth and Hecate Enthroned

[Ed Note: How did this photograph not make your 10 Most Ridiculous Black Metal Pictures?] 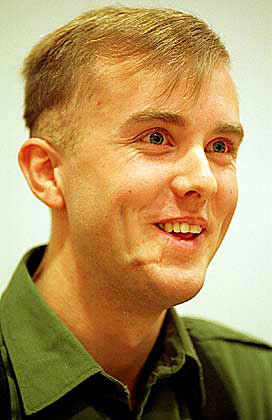 Just look at the fuckin’ guy!