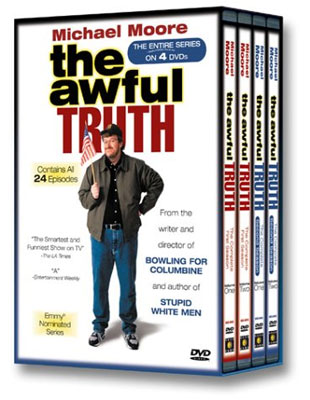 Many of us were disappointed to learn that Michael Moore is a bit insane — all that stuff about mad cow disease already having spread throughout U.S and the recession being a conspiracy to cut wages and so forth. But the madness doesn’t detract from the genius, or the fact that Moore is deserving of admiration. “The Awful Truth” proves it.

‘Swiftian’ is almost as overused as ‘Orwellian’ as an adjective and accolade, but Moore and the other people who worked on this show deserve it. Swift’s, “A Modest Proposal” is great because it cut through all of the posturing, callousness and general bullshit; ultimately forcing people to confront the horrors of the English treatment of the Irish, as well as the perversity of the reasoning that allowed it to occur, all the while being very funny. Moore might be the only person to ever really fill Swift’s shoes — to be as funny, cutting and emotionally powerful — and The Awful Truth is as good as anything Moore has ever done.

Here’s the best example. Moore learns of a man who has health insurance with “full coverage.” However, the health care provider is using a loophole in their contract to avoid paying for a life saving pancreas transplant for the young father.

There are many ways a TV host might insert himself in this conflict. The two most common would be either to do an Oprah-style, tear jerking interview with the man in his family, or to do a Mike Wallace-style, “so, will you ever stop murdering fathers?” interview with company executives. Moore does some of each, but improves on both when he takes the man to the corporate headquarters to pass out funeral invitations. The look on the face of the PR hack that gets handed a campy, hallmark style card which reads, “I’m Having a Funeral!” sums up the situation perfectly. The boilerplate he has been spewing is reduced to dust. The morality of the situation suddenly becomes so simple that even he knows he’s on the wrong side. It is a scene in which a young man is basically begging for his life and it’s one of the funniest things I’ve ever seen. Oh, and the man got his transplant. So on top of everything else, “The Awful Truth” saved at least one life in a very direct way.

There are several more moments of greatness to be found within the show’s 24 episodes as well as dozens of plain old laugh out loud moments. All 24 episodes are now available on DVD for about $60. So why put up with the crappy, commercial ridden programming when you can have this instead?