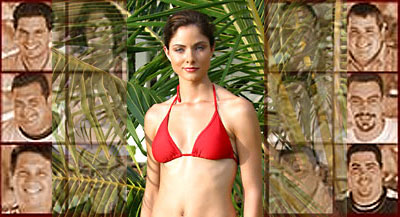 Is it really necessary that I spend the next several weeks watching a beautiful, yet painfully moronic woman pretend to care about assorted nerds and misfits, only to select a dim-bulb hunk in the end, insisting that looks had nothing to do with it and that she’s not at all shallow? Outside of the fact that the “Average Joes” are decidedly more average this time around, this is an exact duplication of the first show, right down to the “twist” of having the remaining geeks compete with bodybuilders and ripped studs for the cunt’s affections. Despite having seen only the initial installment, I will use my powers of foresight (and strange ability to predict that the powers-that-be will not change one iota of the previous show) to give you a rundown of what we will see in the days ahead:

And just as Ruthlessly the short will also be dispatched, followed by the skinny and undeveloped, and ending with the overly eager. And when the real men arrive, there will be assorted put-downs, a brief unification among the dweebs, then a purge that leaves only one hunk (sensitive, self-deprecating, with a dash of that “sense of humor” women always claim they want, when in reality it’s nothing more than that Bush-style smirk that makes me want to slash throats with abandon) and one Joe, no doubt a passable sort who might not turn heads, but has enough sweetness and generosity to make us believe that hey, I could be that guy. If I adopt an aw-shucks demeanor, I too might secure some big-titted bombshell. And then the phony build-up, the red herrings, the last-second commercial breaks……….and then the selection. Round 2 of Average Joe, same shocking result. Some might cry, “How could she be so blind? How heartbreaking!” Others might deplore the outrage of it all, how simple, decent, slightly ugly men can’t catch a break and how beauty wins out regardless of gender. And then there is your humble critic, wondering who in the hell is going to have the balls to give us the long-awaited and much-deserved Severely Retarded Joe.