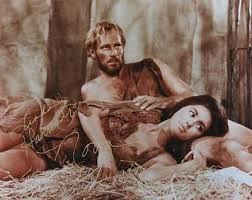 She is, upon first glance, a mere savage. Perfectly coifed, athletically toned, and sporting the sort of teeth one might not expect after several decades of catch-as-catch-can dietary desperation, but a wild, untamed beast nonetheless. Her daily routine, a voiceless void; the inevitable product of generations of inbreeding following the standard nuclear holocaust. Devolved, at a time when the genetic ladder forced but one direction. Brain matter a static, unchanging soup of slovenly simplicity. Language, once refined, now but the unfeeling grunt of the dispossessed. Yet, she stands apart. Her raven hair, a pre-civilized calling card, is matched only by her blissful breasts, pouting lips, and piercing gaze. Among the indistinguishable mass of animal skins, dirt, stench, and gut instinct, she alone possesses a defiant humanity. For as she paws and slurps from the husk of forbidden fruit, she also, as if connected across space and time to the preternaturally curious ape of 2001: A Space Odyssey, looks beyond the limitations of her nasty, brutish existence in order to contemplate a terrifying, yet undeniably beautiful future. For the ancestral human, a life beyond terrestrial concerns. For this future female in a topsy-turvy world, a companionship borne of lustful need. Pure, unapologetic deference. An escape of sorts, straight into the arms of Charlton Heston.

And it was Hestons ham-fisted stare that brought about the only real change our heroine had ever known. Before, one awoke, ate, struggled, and submitted to rape, then maybe, just maybe, a fitful rest. An endless cycle over innumerable, unchanging years. After, endless possibility. A savior. A lover. A husband, perhaps even a father. He said it all with those appropriately labeled bright eyes. And the oiled chest didnt hurt. Here was a man at last, a recognizable face amidst so much anonymity. A sharp tone to cut through the idle chatter. Unique, immovable flesh to rise above flabby mediocrity. And she alone honed in, laser-like, to bring forth revolution. Call her Eve, if you like; the trail-blazer, trend-buster, and path-finder all rolled into one. She would, in fact, be the first to choose. Sure, she would also kneel at his feet, eyes skyward, but on her terms. And if she was more puppy dog than full-fledged partner, that too would be a decision without illusion. The cage of an unjust society for the iron bars of couplehood? Hardly. You heard Taylors lament: a world left behind with lots of lovemaking, but no love. He was tired, more bereft than fulfilled. Everyone in it for themselves, with no one left behind to heal the wounds. And so, a fresh start. Equality made women selfish, greedy. The spirit died. All it took was a ride into the future for matters to change. From here on, wed leave it in their hands. Decidedly male at that.

Consider Taylor in a moment of frank self-examination: No one will listen to meOnly you. You. The female of his race. It all made sense. Taylor could talk and talk and talk, and every word carried the heft of an aggrieved manhood. Did she understand? Perhaps. Did any of it register? Who can say. What might result? A mystery, save the inability to express contradiction. Do you love me, I wonder. Can you love? His expressions are in her direction, openly verbalized, but they may as well be interior monologues. But to answer your queries, yes and yes, in exactly the manner youve long desired. When fear and uncertainty take hold, her grasp will be unyielding. A decisive moment, a look to you. A firm hand, an offered cheek, steeled in readiness. He even admits it: Youre not as smart as Stewart, but youre the only girl in town. The only girl in town. Merely a refashioning of the chestnut that a man is only as loyal as his options. Shell do, dammit, because she must. But shes the one whos been truly checkmated. Would she rather be a stuffed relic in the museum? On the slab in the laboratory of Dr. Zaius? Jailed and hosed down until the moment of dissection? And when it matters, when it looks as if all will be lost in a moment of madness, she reaches out. The bars clubbed, but back again. She is unflinching, unblinking. She wants, she needs. Nothing else matters.

Nova. A name for all time, as form-fitting and natural as a second skin. Soon, she would be taught to smile. Fitting, given that she never before had a reason. As played by Linda Harrison, she is everything we wished them to be, if only. We were taught not to ogle and leer, whistle and wink, but shes once again granting us the right. The duty, despite the damned dirty apes. She was the last, best hope for a future where, despite the abundance of radiation and mutation, beauty could again triumph over ugliness. The maniacs could blow it all up, but an exposed leg still retained an indescribable power. The longer the better. And while there remained an undeniable vacancy, she lived to serve. The everlasting passenger, a second fiddle for a new eternity. Silence would be consent, not out of fear, but as a matter of fact. Heres to the lack of an alternative. All told, shes among cinemas finest fulfillments of the female form. Not a word, but ultimately transfixing. An identity entirely up to whatever slab of beef escorts her through the brush. Miserable until noticed. Condemned until granted the ultimate reprieve. A blank slate awaiting that first, most lasting contribution. And yet, Nova is the last of her kind. Soon, shed yield to empowerment, strength, and assorted clarion calls. But she had her time. Her moment in the sun. A taste of triumph before the fall. 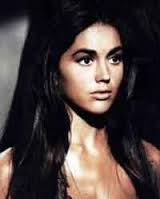 So whatever happened to Ms. Harrison? How, pray tell, could she ever hope to surpass the unsurpassable Nova? Would anyone be surprised that she traded in her absence of agency for even less control? Yes, she married an executive. A movie guy, because lighting out for the territory wouldnt fit the profile. Despite rumors that shed be Brodys wife in Jaws, or see significant screen time in any number of blockbusters, her wedded bliss to Richard D. Zanuck produced little but glorified cameos in Airport 1975 and Wild Bill, with a career capper as woman in cart in the Planet of the Apes remake. Still, stardom would have seemed, well, unseemly. Would Nova have demanded top billing? A voice at a scientific inquest? She couldnt even stand the sight of words in the dirt. No, we imagine Linda as fully kept; maids for the laundry, nannies for the kids, and always, always a silent partner on a bicycle built for one. Immersed in a biography she neither wrote nor read, she faded away as she must, so as not to cloud the real issue. Hell, lets not even consider a current photo. Shes Nova now and forever; her sizzling sexuality preserved as an insect in amber, impervious to further scrutiny or interference. Like Taylor in the Forbidden Zone, she found her destiny.