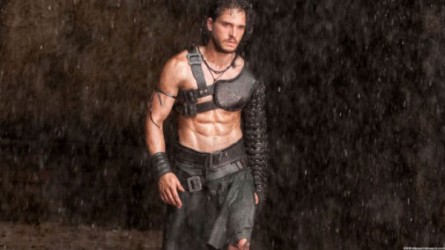 Gaze upon the glistening abs that conquered Rome.

How This Movie Came To Be:

Tristar Executives: “Paul, we’re only meeting with you as a favor, because we thought this was a film pitch from Paul Thomas Anderson. What’s your plan? Resident Evil 6?

Paul W. S. “The other Paul Anderson, film-maker” Anderson: “Actually, I noticed how you guys have been going back to the well with gritty remakes of classic movies.”

Tristar Executives: “Oh, do you want to do a sucky remake of Event Horizon? Strictly PG-13, of course?“

PWS Anderson: “Actually, I’m proposing we do a remake of a remake: The Last Days of Pompeii. Just in time for 100th anniversary of the original movie.”

Tristar: “Will this have gladiators, or Spartans?”

PWS Anderson: “Both. I want to make a movie that combines the action of  Gladiator with the romance of Titanic-” 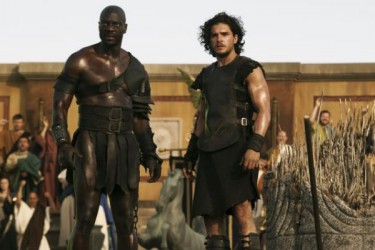 “I will trust you, even though we only met two days ago, young white man.”

The Cliches That Was Rome:

In many ways, the annihilation of Pompeii and Herculaneum by Mount Vesuvius is the ur-disaster film– the first extensively documented epic disaster that wasn’t an apocryphal bronze age myth, but a recorded cataclysm. For that reason, it has a resonance like the sinking of the Titanic, or the wreck of the Hindenburg and also, because it killed 10,000 of thousands of people in a very hardcore way - encased in volcanic statues for all eternity. When people imagine a volcanic eruption, most people in the world tend to think of Vesuvius a giant firestorm of pyroclastic annihilation.

Paul W. S. Anderson pillages from the writings of Pliny the Younger and Edward Bulwer-Lytton with the pedestrian eye of an Attila, taking only the aspects which have the most obvious value. It’s almost sublime in the genericism, a film treatment that could have gotten funding at any point in the history of cinema.

Let’s do the checklist:

Seriously, did original stories kill PWS Anderson’s parents? Because this story embraces the dullest tropes so heavily as to make that a plausible explanation for his film-making career.

As for the cast, they’re mostly overwhelmed by the complete lack of character development or individuation in their lines. You know nothing, Kit Harrington. Emily Browning apparently considers staring to be an acceptable substitute for emoting. The only good performance is from Kiefer Sutherland, who knows how to embrace hamminess when it’s called for. He’s the only person who appears to be having any sort of fun or enjoyment in this movie. 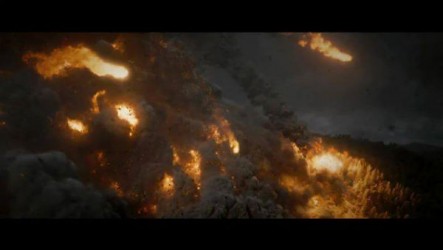 Flaming lava. The real star of this movie (and more charismatic than Kit Harrington).

How Do You Like Your Romans? Roasted, Par-Boiled, Fricasseed?

Short of watching Nazis die, no other people offer as much Schadenfreude to modern society as the Romans do. They are invariably snobby, treacherous, arrogant, and enunciated in the best upper class English accents that the Royal Shakespeare Company can produce. If we don’t hate them for slavery, we hate them for their sodomy (though that element seems notably decreased over the history of gladiator movies), or we just hate them for their practice of decimating every other people in Europe.

Where Paul W.S. Anderson is clever is in realizing that it’s a disaster movie, not just one disaster. This movie is actually a greatest hits medley of most of the biggest disasters to befall the Roman empire. We get an amphitheater collapse (Collapse of the Fidenae Amphitheatre, 27 AD), the “day of horror” at Alexandria (earthquakes and tsunami, 365 AD), a big revolt of gladiatorial slaves (Revolt of Spartacus, 71BC), a massacre of latin citizens by legionnaires (periodic, but I’ll go with the purges done by Marius in 86BC). This variety of cataclysm keeps the movie from just being a hour and a half game of ‘the floor is lava’.

What distinguishes this disaster movie from it’s Roland Emmerich brethren is the pure ruthlessness of the film. Doting mothers, sympathetic servants, effeminate fops- no survivors. Just as I was getting tired of PG-13 rating, Anderson shows how brutal you can get in a PG-13 film.

At the end of the day, you either want to enjoy tens of thousands people dying in a fiery holocaust, or you don’t. Pompeii is spectacle and devastation and nothing else besides.