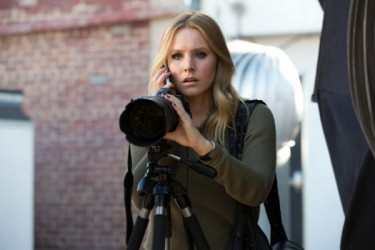 Strike a pose! Do the Veronica Mars: stand behind a large camera with a look of concerned alarm!

Fair Value of Veronica Mars: $9.00. It’s a crisp though cliché mystery film that’s kept bearable through the snappy dialogue and the talents of the cast. It’s a TV movie rather than a movie, feeling more like an extended episode than an actual cinematic continuation.

The Triumph of the Marshmallows: Veronica Mars: The Movie will go down as a cinematic footnote for no other reason than the new era of film funding- this film could be said to have 91,565 producers. That’s the number of donors whose contributions on Kickstarter lead to the revival of a cult franchise. The optimist in me thinks that this film will lead to a renaissance in American films, as blacklisted auteurs and orphaned properties coast on fanbases to make new films. The pessimist in me believes this will sour into a darker future, where Hollywood essentially squats on properties, holding off on sequels until fans pay off an adequate Kick-starter ransom to safeguard the producer’s risk. Crowd-funding appears great for now; but wait until the day when all initiatives are crowd-sourced; the concept may not be so charming when it becomes the regime. 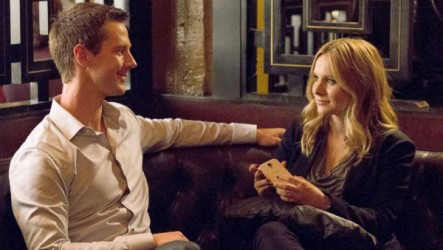 The Cleaned Up Bad Boy: Like the Manic Pixie Dream Girl, but with a dick.

Grosse Pointe Mars: Veronica Mars was the TV equivalent of Rian Johnson’s Brick – a brilliant recognition that the tropes of detective noir and high school drama were an excellent drama pairing. The three seasons of the show kept swerving across the lines between comedy and dark cynicism, depicting a soured Southern California where corruption had seeped down to the core of even the youth. Though it seems tame in the HBO golden era, it was a groundbreaking show, smart and vicious. It was a more cerebral, non-supernatural cousin of Buffy the Vampire Slayer, with brainpower replacing the kung fu.

So now we are returned to Veronica Mars (Kristen Bell), ex-girl detective. She’s successful in New York, a law school grad with her PI days behind her, settled down with her college boyfriend Piz (Chris Lowell), and determined not to return to her 10th high school reunion.

And that would be the cue for her old friend/enemy/lover Logan (Jason Dohring) to be the prime suspect in the murder of his pop star girlfriend. Of course, we all can see where this is headed: Veronica Mars stays in New York, trades quips with Piz, and begins her legal apprenticeship under veteran attorney Ally McBeal.

Nope, she’s drawn back into the conspiracies and cover ups of Neptune, California. Along the way she teams up with her scoobie gang of misfits, antagonizes her old rivals, and tries to avoid the attention of the corrupt local police force. 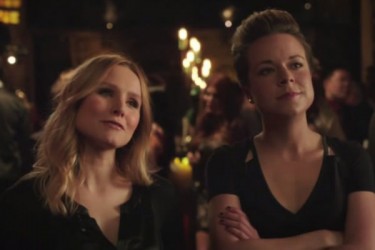 Writer/director Rob Thomas has lost none of his comedic touch, and the laugh lines crackle with snark. That’s good, because the main plot is a formulaic mystery, and the sub-plots are neglected and under-developed. There were very few twists that felt particularly shocking, and the only major character development was in Veronica’s recognition that her sleuthing was an addiction. It felt like a reasonably good but not great two-part episode of Veronica Mars.

Veronica Mars: The Movie loses on half of the formula that made the show work: the high school drama. With a bunch of reasonably mature adults, the story’s a murder mystery without much of a gimmick, and Veronica herself is less fantastic than her earlier prodigies. As compared to other high school reunion comedies, Veronica Mars lacks the self-satire or personal introspection that would enable it to function as a true interaction with the series’ past. This is a film that will please fans but leave the non-enthusiasts scratching their heads as to what made Veronica Mars so compelling as to bring about this reprise performance. In the long run, this film serves as a sufficient epilogue to a terrific show, and hopefully a fore-runner that will remedy some of the present evils of the Hollywood system.