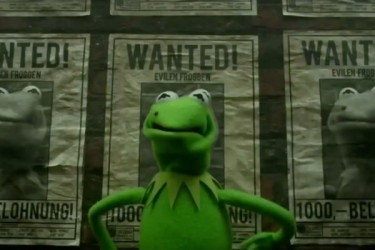 Fair Value of Muppets Most Wanted: $5.00. It’s a middling Muppet medley, neither miserable nor marvelous, merely mildly medium. This caper film in the middle of the pack as muppets movies go, and will suffice for children who’ve already had enough of Frozen and The Lego Movie. 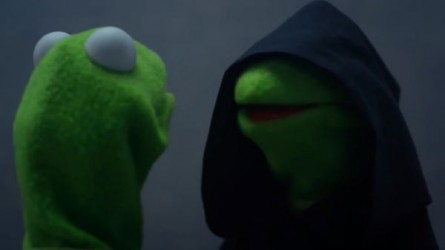 “I can feel your insipidness growing. Give in to the Dark Side of the Felt.”

We’re Doing a Sequel! And with that first number, everything is telegraphed about this film. The franchise is back, long live the franchise, here is your talking felt sculptures.

The Muppets, re-united, are conned into doing a world tour by Dominic Badguy (Ricky Gervais). He is in cahoots with Constantine (voiced by Matt Vogel), the world’s most dangerous frog, who looks like Kermit, give or take a few moles.  They are planning to use the show as cover to their roving tour of museum robbery. Constantine takes Kermit’s place, while Kermit is returned to a Russian gulag, commanded by Nadya (Tina Fey).

Constantine and Badguy aren’t really interested in managing the tour, and so the Muppets, left to their own devices, quickly go off the rails with cringeworthy Miss Piggy covers of Celine Dion, etc. If the film has a point, it’s that caution is need as well as enthusiasm; the Muppets only work when Kermit is there to fret and manage them.

Muppets Most Wanted is more Kermit centric, and that largely neglects the rest of the ensemble. I had to strain to even recall that Rowlf was in this film, and most of the other characters are just given standard rotes- Beeker explodes, Gonzo is weird, Fozzie is dumb. Half the movie is Kermit at the world’s most star-studded gulag; the other half is driven by Constantine’s inept doppelganger act. Lastly, there’s a sub-plot with Sam Eagle being on the case with lazy interpol agent Jean Pierre Napoleon (Ty Burell).

Other Muppet movies have succeeded at entertainment by using the manifest falsity of the Muppets to establish an easygoing satire. Satirizing a heist film at this point is an endeavor staler than sawdust. The Muppets was wonderful in part because of gags like The Moopets (itself a covert shout-out to Peter Jackson’s Meet the Feebles), which turned the satire on the tropes of the Muppets and of Muppet fandom. There’s not a lot of 4th wall breaking madness to be had here, only the 70 millionth rehashing of the ‘mirror sequence’ from Duck Soup. Actually, Duck Soup is a much better choice if you want a kid-friendly comedy.


All told, this feels like a script that was developed in the 80s and was then canceled for bearing too much of a resemblance to The Great Muppet Caper. It’s actually better than that film, but that’s largely due to the song-writing- the Muppet movies are, for the most part, the last refuge of musical theater in cinema. TIna Fey’s number, in particular, stands out. The Muppets have a great racket going at the moment because casting is easy- every A lister in Hollywood wants to be able to show their kids or grandkids that they’re in a Muppet film, and so there may be more celebrity cameos than actual extras in this film. 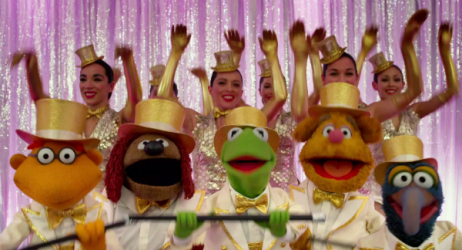 WE CAN NEVER DIE. ONLY REPRISE. AT WORST WE CAN FAIL TO MAKE ENOUGH PROFITS, AND THEN WE MERELY SLEEP FOR BUT A DECADE BEFORE WE RETURN ONCE MORE.

I don’t think there’s a point to reviewing this film, any more than there is a point in comparing the quality of food at different McDonald’s. Disney is going to be making Muppet movies for the remainder of American, or possibly human, civilization. In time, there will be Muppets en Paris, Muppet League Baseball, and even Muppets Meet Cthulhu. And as the cinematic march of the fuzzy marionettes continues, Muppets Most Wanted will continue to float, lukewarm, in the middle levels of the franchise’s history. It’s not awful enough to be a franchise killer nor original enough to merit any change in directions.

The best jokes in this film are the non sequiturs. If you’re introducing your children to the Muppets, it’s not the place to start. If your children already love muppets, they will find this an unobjectionable continuation of the Great Muppet Pageant of Life (The Great Muppet Pageant of Life is slated for release in 2037, as I understand it). It stands as possibly the 5th or 6th best Muppet film that has been made.

Now if you’ll excuse me, I’m going to forget about this film and go watch some episodes of Jim Henson’s The Storyteller.