You know that friend who’s always telling you that you should watch The Wire? The one who always says things like, “Oh my god, why haven’t you watched it? It’s the greatest show ever!” Well, I’m not that friend, mostly because if you haven’t seen The Wire, odds are that I don’t want to talk to you. Luckily for you, however, I am the friend who will earnestly and sincerely tell you that you should watch Friday Night Lights. Not the movie – I’ve never seen it. I’ve never read the book, either. I’m talking about NBC’s relatively short-lived dramatic series that was beloved by critics, but a poor performer in the ratings department.

I know what you’re thinking. “But Sarah, I don’t really care for shows about teenagers.” I get it – but FNL, though largely comprised of teenaged characters, wasn’t designed to attract teenagers, at least not in my estimation. It’s not bitchy enough or creepy enough to captivate the typical young viewer. “Ok, Sarah, but I also don’t like shows about sports.” You’re in luck! Despite the entire premise of the show being built around football, football itself is more of a tertiary character, really. Nearly every episode features scenes in which football is played, and yet it never seemed like football was the point. 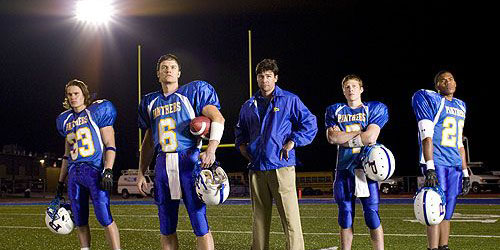 For me, the appeal of FNL lies where it should – in the cast and the writing. The beautiful thing about this show is that everyone is familiar, at least personality-wise. The rich kid jocks with asshole parents who buy their way onto the team under the guise of being “boosters.” The naturally gifted athletes whom everyone adores. The poor kids looking to football as a way to break free from poverty. The cheerleaders who were polite enough to be well-liked, but who weren’t exactly what you’d call “friends.” The troublemakers, male and female. The beloved coach. What’s more, as a southern girl, FNL embodies how it felt to grow up in a small town where, in Autumn, the question of “What are you doing on Friday night?” never needed be asked. Obviously, you were going to a football game and then to an after-party, if you were lucky enough to be invited. But because FNL takes place in Texas, where high school football is EVERYTHING, the feeling of quiet desperation that often exists in small southern towns is amplified 1000%.

Everyone speaks the way that you and I speak. There arent any bullshit Aaron Sorkin soliloquies filled with the sort of platitudes that make you roll your eyes. Characters stumble over their lines, repeat themselves, use slang, and sound, well, normal. No one is what I’d consider sophisticated, and that’s exactly the way it should be. With one glaring exception that I’ll address momentarily, these are realistic people going through situations that are all too familiar to a great many of us; that is, if you skip over just about everything that happens in Season 2. (This would be the glaring exception to which I was referring.) Remember the Writers’ Strike in 2007-08? I sure as hell do, but I’m guessing that FNL Executive Producer Peter Berg would rather forget all about that. You see, when writers go on strike, non-writer-types panic and pull out the sort of plot devices that have kept soap operas on the air for 60 years. I won’t spoil it for you, because you have to see it to understand how ridiculous it was; but as I’ve told several friends lately as they began power-watching FNL, if you can make it through the second season, you’re home free. In fact, I’d say that Seasons 4 and 5 are by far the show’s finest. 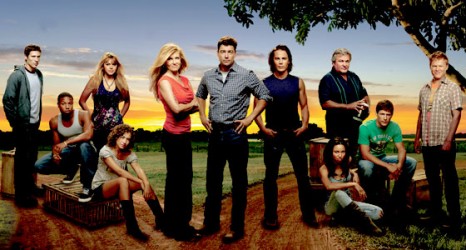 Back to the cast for a moment. For me, casting an ensemble comprised of relatively unknown actors was a great idea. Fans of the film version of FNL will recognize both Brad Leland and Connie Britton from the movie, but I knew Connie first on a little show called Spin City. Seriously. 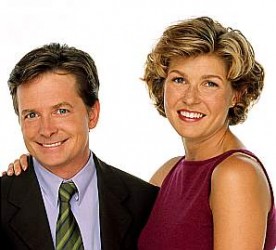 We’ll forgive Connie for that hairdo, because the late 90s was a difficult time for all of us. She more than redeemed herself as Tami Taylor – Coach’s wife, and owner of all of the hair. Scroll back up and look at the cast photo. You’ll see what I mean. Tami Taylor is the kind of mom I’d like to be someday: loving, supportive, driven, and absolutely incapable of tolerating bullshit. She is one of the most fully developed characters on FNL; though she, too, fell victim to the occasional ridiculous storyline. (See: her career path.) I don’t want to say too much, as the final season has a lot to do with her career, but I will say that Tami Taylor showed me that merely possessing a Bachelor’s degree means that I can get all sorts of jobs that I’m not qualified for.

Of course you can’t talk about Tami Taylor without talking about her husband, Coach Eric Taylor. Played by Kyle Chandler (who is having a pretty good career lately), Coach is the heart of the show. He’s tough, he yells at his players, he demands maximum effort, and he is a disciplinarian. You know, like a real coach. But he’s also compassionate, forgiving, nurturing, and a mentor. (I have known a few coaches who failed in those areas.) I can’t even begin to tell you how many scenes between Coach and a player left me a little teary-eyed, and not just because I cry at the drop of a hat. Rather, it’s the simple, honest, and heartfelt dialog that moves you, and Chandler nails every one of those moments. In one of my favorite scenes, he kneels down to talk to a player who had been pretty difficult to deal with at times, and says, “You may never know how proud I am of you.” THAT’S IT! THAT’S ALL HE SAYS! But it was exactly the right line, delivered by exactly the right actor. 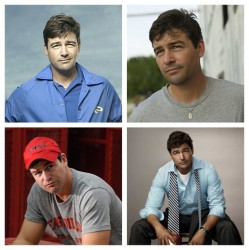 Ignore the fact that Chandler really only has one facial expression. The man can act, damn it.

One last character of note: Landry. Oh sure, you might know actor Jesse Plemons from his role as batshit nazi-sympathizing weirdo Todd on Breaking Bad, but I prefer to remember the good old days on FNL, when he was a just a goofy Texas kid who started a Christian metal band named CRUCIFICTORIOUS.

If you have already watched FNL, I hope I have done the show at least some justice in this short review. If you haven’t seen it, WATCH IT ALREADY, WOULD YOU? I promise that even if you dont care about teenagers or football, you will like it. And if by some infinitesimal chance you dont like it, well buddy, I feel sorry for you. 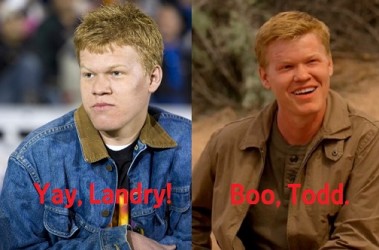