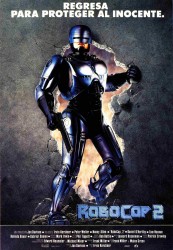 Hes back to protect the innocent.

ENTIRE STORY IN FEWER WORDS THAN ARE IN THIS SENTENCE

Delightfully awful stop-motion variations of Robocop and the villainous Robocop 2 (the wonderful Cain) roll around a lot in the last 10 minutes, but the latter doesnt look remotely human, so no dice. Murphys confused wife shows up for three seconds to be coldly informed that They made this to honor him, although that only underscores Robocops asexuality. Overall, Robocop 2 upholds the law of heteronormativity to the extent that even Robo-Cain practically gets a ones-and-zeros boner upon seeing his moll for the first time after cybernetic conversion. Oh yeah, the Old Man gets his dick wet, too, albeit offscreen, thank god.

As happy as I am to rewatch this goldmine every time it appears on Starz or Encore (roughly twice a day), I cheated and looked this up online. And Im very pleased to report that there are 79 fucking deaths in Robocop 2. Almost all are hilarious, but perhaps the most satisfying is the protracted finale in which Robo-Cain mows down large swaths of hapless cops, politicians and telejournalists with an M134 minigun. But thats nothing compared to this films bounty of.

While its hard to beat Cain forcing his nine-year-old career criminal underling to watch the scalpel dissection of a corrupt cop, this film offers a Top Five All-Time sequence in this category: the prototypes for Robocop 2 either committing suicide upon activation by ripping their heads off, or merrily blowing OCP R&D flunkies away point blank.

Yet again, where to start? After getting disassembled by Cains drug cult, Robocop is rebuilt and overloaded with hundreds of new family-friendly directives to be more compliant to OCPs corporate needs. This results in multiple profane exchanges with small children, this films true ace in the hole. My favorite: A bunch of street vermin are luxuriating in a spraying fire hydrant. Robocop pulls over, promptly shuts that shit down, then imparts a profound life lesson.

ROBOCOP: Waste makes haste. For time is fleeting. A rolling stone is worth two in the bush.

WAS THERE A STUPID CHIEF?

The late, great Robert DoQui understandably fell in love with this franchise the second Kurtwood Smith spit blood on his desk, and is back as duty-bound hardass Sgt. Reed. Just like the original, as Plexico pointed out , Reeds not a fan of cops striking, no matter how many get obliterated on a daily basis with terminated pensions. Lets enjoy this explanatory paragraph from Robocop Wiki:

Reeds dedication to duty is legend. To him, a police officer is not merely doing a job – theyre a vital staple of society, the face of civilized society, representing the people, the restraint and the triumph of law over lawlessness. To say this takes precedence over his officers well-being is not fair, Reed has a hard time accepting their lack of funding and mismanagement, but to him, a visible police force on the streets, and the individual officers sense of duty to the citizens of old Detroit, is more vital to society than the actual effectiveness of those officers.

Who the fuck writes these things? Can I contribute? Im sick of having sex, too.

HOW BAD IS IT REALLY?

Nuke! Nuke is it! Inject this dyed contact lens solution into your neck and youre in for total euphoria. Just watch out for the Blue Velvet strainitll have your teeth wiggling. I guess Nuke is supposed to be an amalgam of blow and molly, which sounds outstanding, but Robocop cant abide by that shit (probably because he cant fuck on it like the Bob Mortons of the world, which is the whole point). Hence, the films entire plot revolves around his futile efforts to stop the manufacturing and distribution of this wonder drug, which is so profitable that Cain has enough petty cash to buy the entire city out of debt so long as City Hall does the right thing: let the people get high and stay out of the way. Voila: crime-free, blissed-out urban utopia. Of course, OCP sends in Robo-Cain to kibosh that plan because they want to foreclose on the city and create deluxe living units for every citizen, policed by nine-foot, Nuke-addicted cyborgs with the brains of mass-murdering psychopaths. Either version of the future sounds great to me. See you in Delta City.