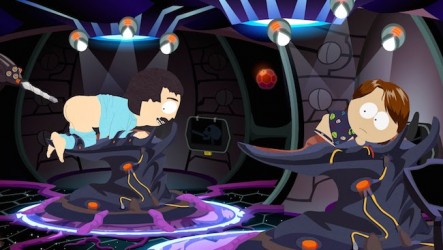 Playing through South Park: The Stick of Truth is like getting a pitch-perfect, 10-12 hour glimpse into an alternate universe where the properties we know and love from film and television are lovingly adapted by game designers who give a shit.

Im shocked to be writing this, as the game had every reason to bomb. As stated above, licensed games almost universally suck, and this goes double for South Park, a franchise whose game history includes a god-awful shooter, a dull minigame collection, and a mediocre cart racer. On top of that, this games publisher, THQ, went bankrupt during development, and the rights were sold off to Ubisoft, a publisher that never saw a franchise it couldnt ruin through oversaturation, smartphone tie-ins, and proprietary online networks.

And yet, The Stick of Truth is legit. Storied RPG developer Obsidian has brought us what amounts to a top-shelf, 10-12 hour playable sequel to the South Park movie. A level of familiarity with South Parks rich history will make your experience even more enjoyable, but if youre a lapsed fan, the game still stands on its own. Obsidian has always had decent writing chops for a game developer, but more crucial is the deep involvement of show creators Matt Stone and Trey Parker with the project. Simply put, a lot of licensed games get shafted from the start because key talent in Hollywood looks down upon games as inferior. Even when developers do get in with producers, its usually a relationship of sharing art assets or coordinating a game launch alongside a film release. Rare is the high-level creative who brings their A-game to an interactive adaptation of their work, but thats what we have here: The Stick of Truth starts off with a simple enough story of asshole kids playing make believe, but masterfully builds toward a delightfully offensive, batshit crescendo that gives its pedigree a run for its money.

Keeping the hits rolling, The Stick of Truth looks and sounds every bit like the show it was birthed from. This is a 1:1 recreation of South Parks unique papercraft style, and HUDs/menus are only shown as necessary. Memorable songs from the show are littered throughout the game, and the original voices are all here. The end result is that someone casually observing a player will mistake the game for the show. Nothing more could be asked.

The act of playing Stick of Truth has a lot in common with Nintendos Paper Mario series. Standard turn-based JRPG combat is combined with timed button presses to amplify attacks and reduce incoming damage. At any given time, you are limited to one switchable companion character with unique abilities, but you can use environmental hazards in the overworld map to thin out enemies before entering battle, and both you and your buddy get a free heal/support move in addition to an attack phase.

If that sounds like the game is a hell of a lot easier than 99% of JRPGs on the market, youre absolutely right: Speaking personally, I found the games default difficulty enjoyable, but it must be said that if JRPGs are your bag, you may find the whole thing to be a cakewalk. In the interest of full disclosure, this is the third turn-based RPG I can remember truly enjoying, the others being Earthbound and Final Fantasy 7. If you read that sentence, scoffed, and called me a fucking casual because everybody liked Earthbound and Final Fantasy 7, then you probably want to start on hard.

Some outlets spent a lot of time describing the ways that The Stick of Truth skewers video games as a medium, as if its some sort of biting treatise on how immature games/gamers/game culture can be. Im not in love with the smell of my own shitpipe fumes, so Im not going to do that. Needless to say, there are jokes about video games in The Stick of Truth. Like the rest of the game, those jokes are really funny. Im not going to spend time describing the jokes or why they work to you, because Id be doing you a disservice by ruining them. Besides that, breaking down and analyzing the beats of jokes with pounds of dry critical language until said jokes are no longer funny is something Id rather leave to the experts in the field.

Ultimately, Ive wanted a game like this for a long time: When the first South Park title came out for Playstation and Nintendo 64, I can remember being hyped at the idea of playing a game like Goldeneye with the addition of anal probe jokes and four foul-mouthed kids. The game I wanted and the game I got were two different things entirely, as (now defunct) Acclaim released an awful, bargain-basement piece of shovelware trash. The genre might have changed, but kids today wont have the same problem: The Stick of Truth isnt just the definitive South Park game, its one of the best licensed games of all time, a shining example of what happens when a great developer treats a great property as more than just an opportunity to cash in on a brand.