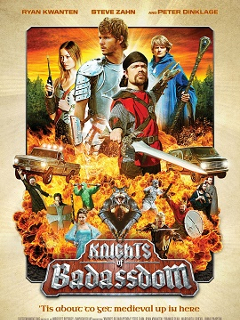 LARPers vs. Paintballers vs. a Demon. Oh dear God.

I made it 7 minutes and 50 seconds into this movie before I needed a break. It was the first of many during my viewing of this film. Now, I know what you’re going to ask: Why did I keep watching it, then? I don’t know. I can’t explain this curse of mine. The only way I used to be able to stop watching a shitty movie was to pass out drunk. Those days are behind me, hopefully. Now I have no choice but to face shit like this stone cold sober.

I’m not saying that this movie made me want to drink. I feel so much better without all of that bullshit dragging me down. But it occurred to me while watching this film that this is not a movie designed to be watched sober. If I was buzzed on Stoli, I would probably be giggling like a doofus at a lot of it. This is probably a good example of why getting pass out drunk most nights is not the best course of action: it makes you enjoy watching movies like Knights of Badassdom. But please, for the love of all that is good and holy, don’t do what I did. I’m a trained professional here. Friends don’t let friends watch Knights of Badassdom sober. It’s just too dangerous.

So yes, this film is just an embarrassment. It appears to be intended as a fun celebration of LARPing and geekdom, but it misses the mark completely. According to the Internet, the movie was taken away from the director and sat on the shelf for several years before finally getting released. Whatever happened behind the scenes, the onscreen result is just not good. It’s 80 minutes of “Hey, LARPers wear funny outfits and talk in Middle English, LOL!” Very insightful, gentlemen.

Now, I’m not a LARPer. I’ve never LARPed. I played pen-and-paper D&D (and MERP, and some Star Wars one) a few times in 9th and 10th grade because my friends were getting into it. But personally, I’ve just never gotten into this stuff. Much like my love of Yu-Gi-Oh! stems from the old cartoon and the Nintendo DS World Championship games, my interest in D&D came about solely from the awesome Baldur’s Gate, Icewind Dale, and Neverwinter Nights games of the late 90s / early 00s. About the closest I’ve come to this whole scene is playing MUDs off and on during the second half of high school and then in college. My point is that I’m a complete nerd, but even I have my limits.

LARPing is over the line.

As are Renaissance Faires. As is paintball, which is also on display in this film. The paintballers are the nemeses of the LARPers (apparently). But all of this stuff is just fucking retarded to me. I just don’t get it. The problem with all of these things is that they require that you go outside. Jesus Christ! Fuck that noise. Isn’t part of being a nerd about being forever alone, reading books and watching movies and playing video games and never having a meaningful relationship with another human being? What’s all this about running around the forest and talking to people?

Anyway, Knights of Badassdom is the story of a guy who gets dumped by his girlfriend because he won’t stop playing doom metal (which is not to be confused with black metal, as explained in some lines of dialogue). He needs to “grow up”, or something. We’ve all been there. He goes home, drinks, takes some bong hits, and awakes to find that his friends have dragged him to a LARP game for the weekend. The friends are Steve Zahn as a high-level sorceror and Peter Dinklage as a badass warrior. Zahn’s character has somehow found a centuries-old book on eBay that is capable to summoning real demons. So, of course, a demon is accidentally summoned. Hijinks and bloody deaths ensue.

Joining the group are Summer Glau as the girl, some other guy as the fearsome axe-wielding “always IC” Gunther, and Jimmi Simpson as the DM. Oh, this brings back memories of high school, where I once “substituted” as DM during a lunch period and, having absolutely no concept of the rules, just made up the craziest story imaginable in the Star Wars game. Amongst other things, it involved letting the other players throw one guy’s character out of the airlock, causing him to start swearing at me as tears came to his eyes. I still remember telling him that it was just a joke, and that nobody had changed any stats on the paper or anything, so they could just start over normally the next day. He wouldn’t take that as an answer. They’d destroyed him, and I let it happen.

Then this other time, we were joined by two gentlemen named Jason and David for a period of about a month in 10th grade. Jason was a black nerd who answered every appearance by a monster in D&D with, “I want to rush him and rape him!” That is not a joke, sadly. David had long black hair and apparently felt that he was the king of D&D. He was absent from lunch one day, and on the next, he pointed at me and stated, “I hate you,” as he walked past me between classes. I guess it had something to do with me trashing his game with another one of my impromptu “The party is suddenly warped to Candyland. You are in the Dungeon of Ice Cream and Listerine” DM bits. David, if you’re reading this, your dungeon fucking sucked. You can’t have a trap in every location. There’s no surprise when everything is a deathtrap! There are rules, man!

You know… I fear I’ve said too much.

Anyway, it is stated at one point that Summer Glau has a “+3 Ass of Perfection”. I saw her on the street once and told her that, and all I got was a restraining order. It was still in effect the last time I checked. Baby, it’s time to let it go. I say many things, but I always speak the truth. Besides, as Ron Burgundy once said, “When you’ve got an ass like the North Star, wise men are going to want to follow it.” America, I ask you: am I not wise?

This is what I mean when I say that this film is a failure. They highlight Summer’s “Ass of Perfection”, and then don’t let us look at it for the entire 80 minutes. I don’t want to look at Steve Zahn or some shitty demon monster. They do not understand their audience. Just… just fuck this movie.

Before I forget, let’s catalogue this film’s defining moment: at 33 minutes and 30 seconds in, they re-enact the infamous “lightning bolt” YouTube video. This is not a joke. I repeat: This is not a joke. How does a movie like this even get made? I spent the next hour waiting for them to do the Star Wars Kid fight, but they failed on that front. I’m not sure if that’s a good thing or a bad thing, but there it is.

Back to the exciting story: a succubus is summoned in the form of the one guy’s ex-girlfriend. She proceeds to kill people without ever taking her clothes off. Who writes this shit? Anyway, at one point, she throws a knife at a guy and it stabs him right in the throat. Then, as the screen goes black, we hear him scream as the succubus eats him. My question is: how do you scream when you have a knife through your throat? He must have taken lessons from Dick Jones or something.

The succubus rips off Schwarzenegger’s “repeating lines from earlier in the movie to simulate human conversation” bits from Terminator 1. She also engages in interracial romance, much like Schwarzenegger did in The Running Man, Commando, Eraser, and real life. God, this succubus fucking sucks, guys. I’ve seen all of this already. Hell, Schwarzenegger’s even shown his tits, which is more than this girl has done! Just a shameful performance all around.

So the succubus is eventually transformed into a demon with a bizarre vertical mouth on its stomach, not unlike those of the F’licktas from Marathon 2. Of course, buried in one of the terminal messages from that game was the fact that this orifice wasn’t a mouth, but the purpose of the orifice on the demon in this film remains unclear. All we know is that the Knights of Badassdom shall successfully vanquish it with the power of metal and steel. In the end, all is right with the world, except for the fact that a bunch of LARPers and paintballers got decapitated and disemboweled. No charges are ever filed, apparently. Summer Glau just starts playing bass and we cut to the “where are they now?” pre-credits text. It’s all over. Finally.

I really don’t know what to say at this point. Why do people feel that LARPers, or nerds and geeks in general, need movies like this? Rather, why do they make these shitty movies about nerd culture? The nerds are busy watching TNG. They don’t give a shit about this. It’s only people like me, who are nerdy but not that nerdy, that will take time out of their busy TNG rerun schedule to even watch something like this, and all I’m going to do is throw my hands up in resignation a la the Seinfeld GIF every 10 minutes. Why waste time and money making a movie like this? Who is it for?

What I’m trying to say is that this movie needed more shots of Summer Glau’s ass in it.