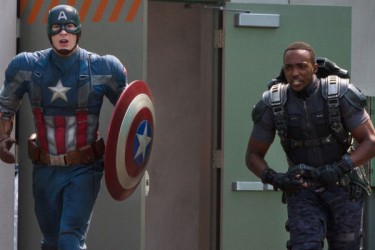 Steve: “Can I call you Bucky 2?” Sam: “NO, Steve, YOU MAY NOT refer to me as Bucky 2! That’s racist, offensive, and creepy on a subtextual level!”

For those of us that don’t have their own box at the local comic book store, please explain: First off, I’m more of a trade paperback guy. Alright, so recently de-frosted super-soldier Steve Rogers (Chris Evans) is a little non-plussed. Rescuing spy ships from mercenaries just doesn’t have the same flair as foiling nazi scientists. He’s just too much of a lantern jawed pulp hero to get into the triple crosses and intrigues of super spies like Colonel Nick Fury (Samuel L. Jackson) and the Black Widow (Scarlett Johansson). That actually serves him well, because he’s the only man that Fury can trust. Which is what leads to Fury being assassinated in Steve’s apartment by the aforementioned commie cyborg, leading to Captain America getting framed and chased by the entirety of SHIELD.

Three Days of the Falcon: The worm has turned yet again from the days of Zero Dark Thirty and Black Hawk Down. Just as 1970s thrillers such as The Parallax View and Three Days of the Condor conveyed the hangover of the Watergate era, so too does Winter Soldier represent the thoroughly demoralized present of America, where Obama’s “Hope and Change” and the rhetoric of Occupy have both evaporated, leaving us only with the dismal prospect of an indefinite oligarchy. Realistically speaking, the third Captain America film would be a court martial of Captain Rogers, with the Black Widow undergoing enhanced interrogation at Gitmo.

But for all the doleful panopticons and pardoned Nazi war criminals, this film serves up the escapist fantasy that super-heroics have always been. Of particular note is Anthony Mackie, as Sam Wilson, a veteran who befriends the Captain. Radiating a charisma like that of Will Smith (albeit with less arrogance), Mackie steals each scene he gets, integrating perfectly as Captain’s new partner in daring. Robert Redford brings the elder gravitas in his performance as politico Alexander Pierce, and Samuel Jackson gets some decent moments of characterization as well. 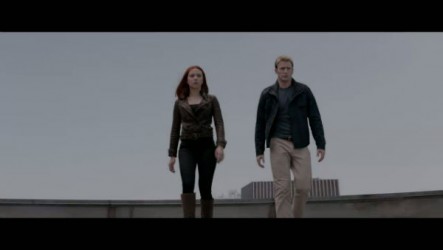 Natasha: “Cap, did you just friendzone me? I’m the Black Widow. I friendzone others, I don’t get friendzoned.”

Bring on the Helicarriers: The best way to describe this movie to Marvel fans is that it is a Agents of S.H.I.E.L.D. movie with Captain America in a starring role, rather than a Captain America movie. If the first film was stylistically of the era of Jack Kirby and Joe Simon, this film is the cinematic adaptation of the style of Jim Steranko’s definitive run on “Nick Fury, Agent of S.H.I.E.L.D.” (and his much briefer foray in writing Cap), with the themes of the Sal Buscema era of Captain America. 1940s Cap as compared to 1970s Cap.

For the less nerdy, this film essentially pivots through three different ambiences. The first third of the film is evocative of the Jason Bourne series, all gritty counter-terrorism and conflicted protagonists trying to reconnect to a modern world. The second third of the film is 1970s political thrillers, with kaleidoscoping conspiracies and heroes on the run, unsure of who to trust. And then the last third of the film is the climax of a late Connery era James Bond film, complete with super gadgets and exploding doomsday machines. Cinematically it’s The Bourne Identity finds the Parallax View so You Only Live Twice. That’s a good formula, and a lot of fun to watch. Best of all, this film is the first film I’ve seen to really balance and handle multiple super-villains. Normally, too many villains has been the ruin of the superhero sequel (Batman Returns, Spiderman 3), but this film ties each baddy to each act of the film, and more importantly, adapts them so that they simultaneously fit the dominant motif of the act while also remaining true to what has helped make them classic members of the Captain America rogue’s gallery.

Captain America has always worked as the moral center of the Marvel Universe, which has led to mounting cognitive dissonance as the gulf between America’s propaganda and our reality has widened further. It is to the considerable credit of directors Anthony and Joe Russo that they manage to make a compelling case for the ongoing relevance and necessity of Captain America.